The Duke of Cambridge has spoken about the ‘troubled past’ between Britain and Ireland while touring the country.

William and Kate are making their first official visit to Ireland with a three-day trip, which began yesterday and will take them from Dublin to Galway.

Tonight, William has highlighted  reconciliation, similar to how the Queen did in 2011, when she visited Ireland and offered sympathy to those who had suffered in the centuries of conflict between Britain and Ireland.

The Duke is speaking about the Troubles and ‘many wrongs’ of the two countries’ ‘complex’ shared history at a reception hosted by Tánaiste Simon Coveney in Dublin this evening.

William also took the opportunity to mention that changing relations between the UK and the EU will mean Britain and Ireland will have to work together to ensure a strong friendship between the two.

During his keynote speech, William said: ‘Growing up I remember seeing the troubles that took place, which affected so many people across the UK and Ireland.

‘This explains why one of the truly profound moments for Catherine and I took place yesterday when we laid a wreath at the Garden of Remembrance.

‘It was a reminder of the complexity of our shared history, and as my grandmother said during her visit in 2011, ”our islands have experienced more than their fair share of heartache and turbulence”. 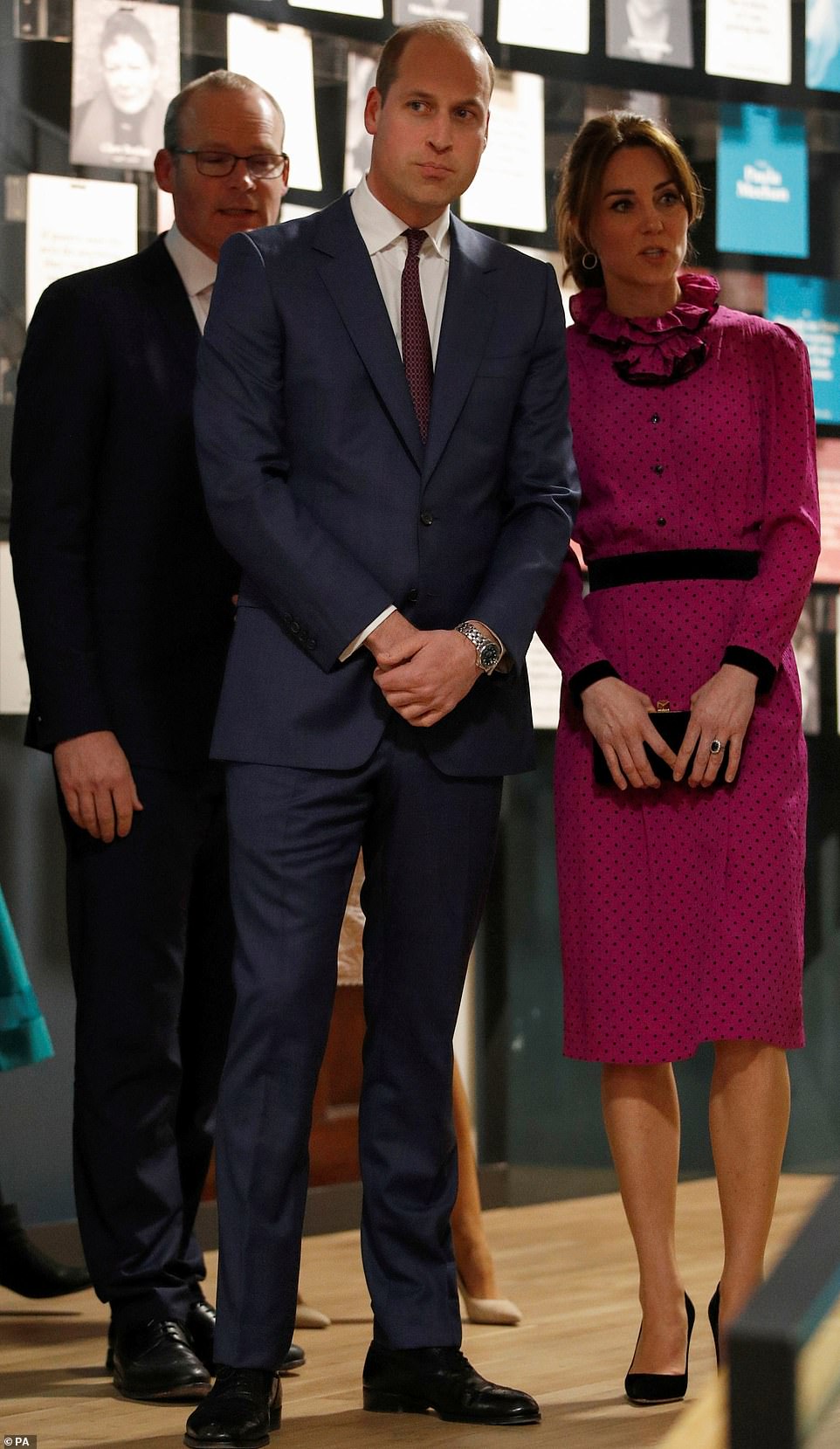 The Duke and Duchess of Cambridge attend a reception hosted by Tanaiste, Simon Coveney, in central Dublin, as part of their three day visit to the Republic of Ireland 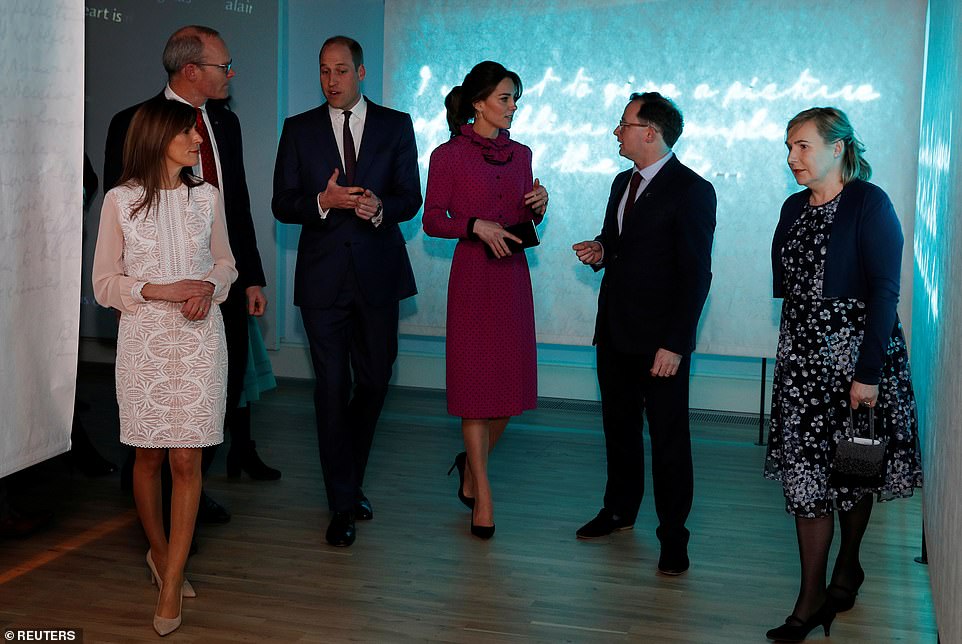 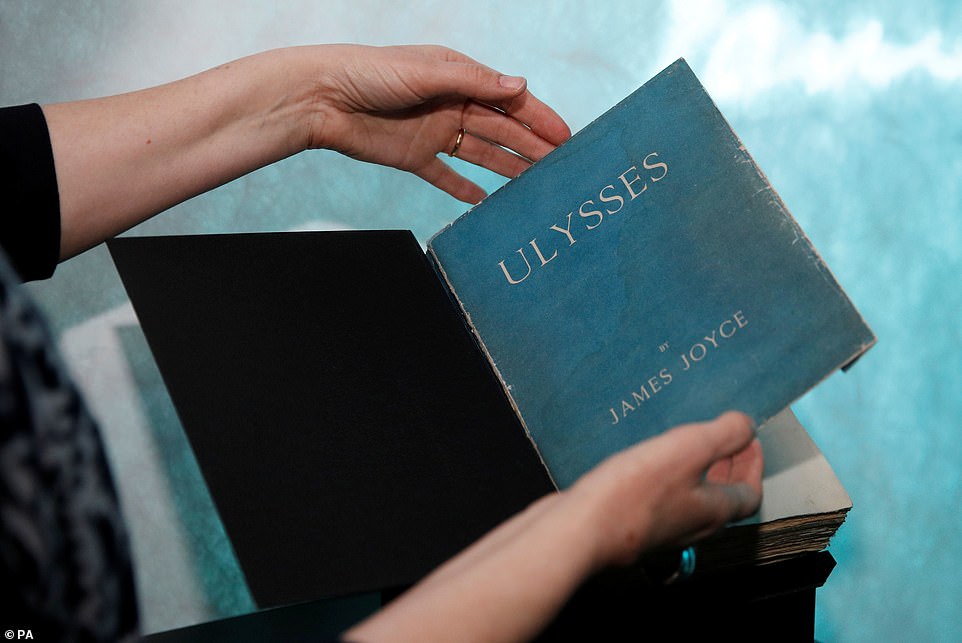 A first edition copy of James Joyce’s novel “Ulysses” is seen before it’s shown to the Duke and Duchess of Cambridge, during a reception held by Irish Tanaiste

‘But it was also a reminder of how far we have come. It is right that we continue to remember those who suffered as a consequence of our troubled past. And whilst many wrongs have been done, it is important that we are not bound by these.’

Prince William and Kate are in the country to soothe post-Brexit relations between the UK and the Republic of Ireland.

Yesterday the couple attended a wreath laying ceremony in the Garden of Remembrance at Aras an Uachtarain in Dublin, and Tánaiste Simon Coventry praised the move in a speech today.

He said: ‘When Queen Elizabeth came to Ireland nine years ago, her visit was characterised by a warmth of spirit; values of friendship and mutual respect; and a desire for understanding and reconciliation.’

He added: ‘She spoke then of the need to be able “to bow to the past, and not be bound by it”.

‘Your decision to walk in her footsteps yesterday in our Garden of Remembrance is profoundly important. In honouring the sacrifice of those who fought for Ireland’s independence, you are signalling – from a new generation of the British Royal Family, to a new generation here in Ireland – that same spirit, those same values.’ 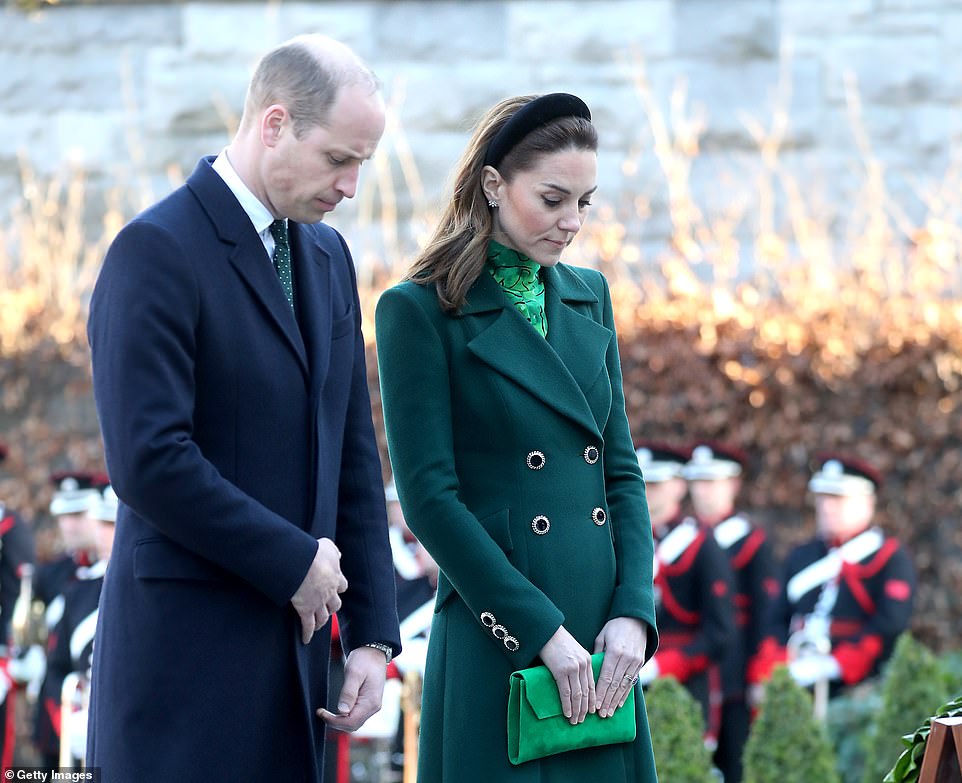 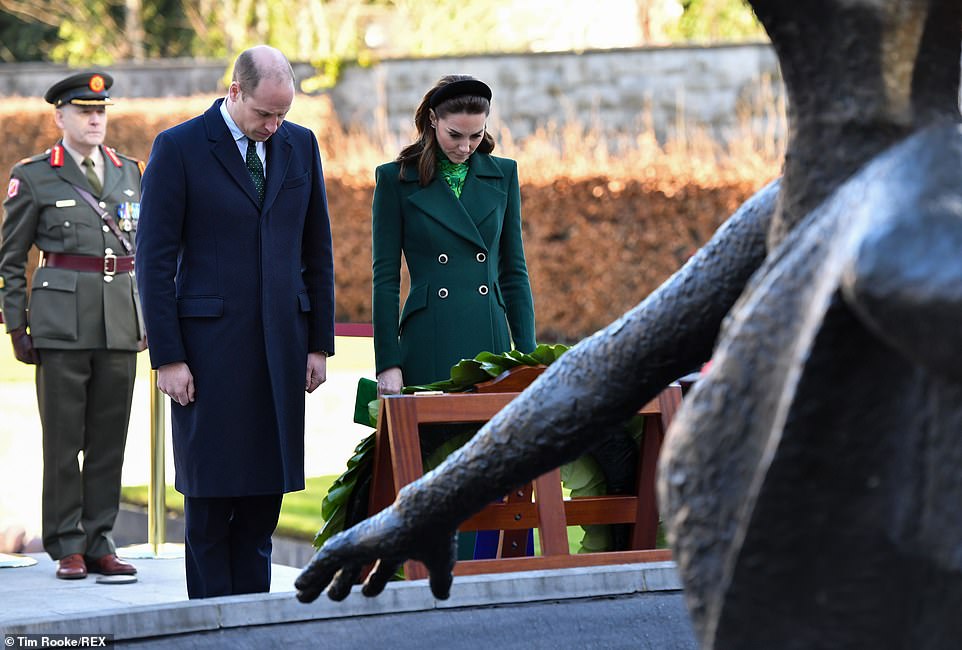 Prince William added that the changing relationship between the UK and the EU will mean Britain and Ireland will have to work together to ensure a strong friendship between the two.

William also quotes his grandmother in the speech as he says Britain and Ireland are not simply neighbours, ‘we are firm friends and equal partners’.

He goes on: ‘The links between our people, businesses and our culture are inextricable, and we should all be proud to see how strong those bonds are.

‘As we look ahead to some changes in our relationship, we must never forget how far we have come together in recent decades in transforming the relationships across our two islands.

‘Many people deserve our deepest gratitude for their hard work, imagination and, above all, courage in bringing about these profound changes.

‘It is vital that people of my generation, and generations to come, never take for granted the progress we have made together. We must recommit ourselves to the path of friendship and understanding.

‘Over the past two days, Catherine and I have seen for ourselves why Ireland is a country looked upon with such envy.

‘As we stood on the cliffs at Howth and looked across the Irish Sea – a mere 50 miles for the British coastline – it was easy to see why so many people find the lure of this beautiful country so difficult to resist.

‘And beyond the breath-taking landscapes, we have received such wonderful hospitality and friendship from all those we have met.

‘This morning we were privileged to meet a group of remarkable people who are working to improve the lives of those who are less fortunate. Their commitment and desire to help is truly inspirational.

‘And we are looking forward to seeing the wonders that the West coast has to offer when we travel there tomorrow. 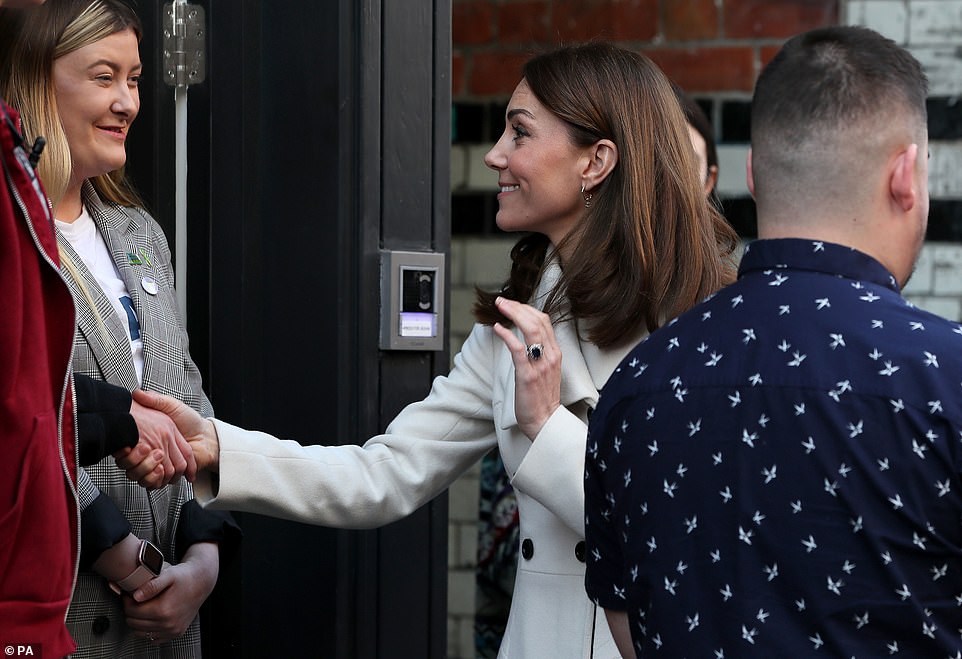 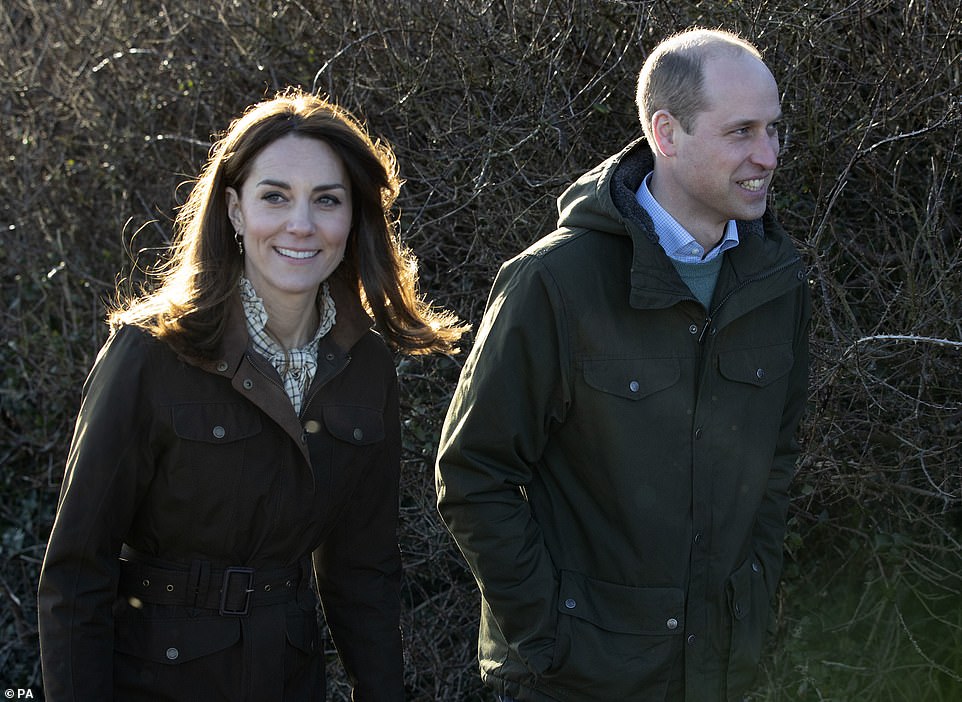 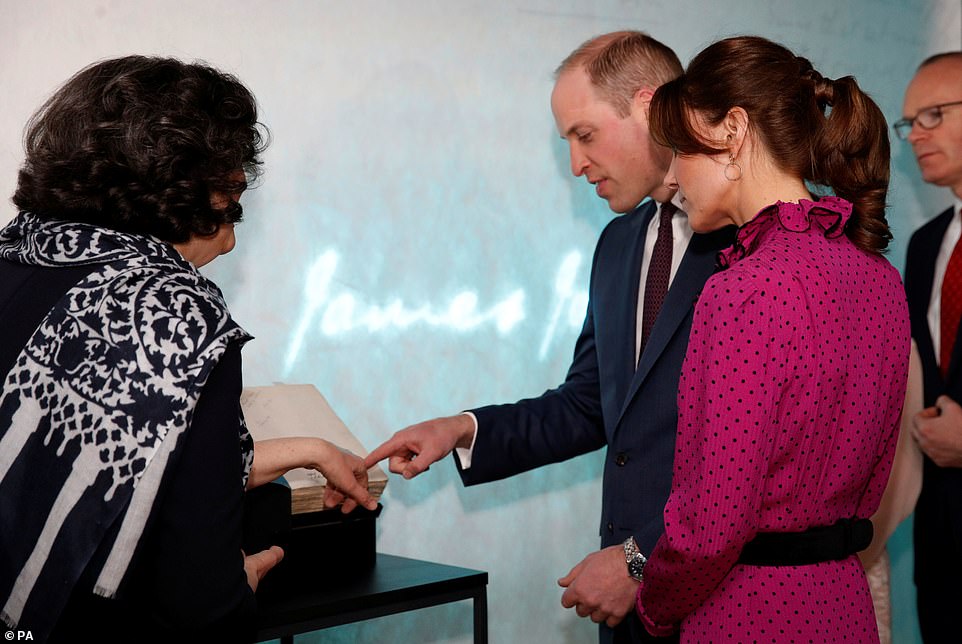 A first edition copy of James Joyce’s novel “Ulysses” is shown to the Duke and Duchess of Cambridge, during a reception held by Irish Tanaiste, Simon Coveney, in Dublin

‘I am confident that friendship, understanding and a shared vision for a peaceful and prosperous future will ensure that the unique and precious bond between our people is not broken.

‘My family is determined to continue playing our part in protecting, preserving and strengthening that bond.

‘So tonight, we celebrate our commitment to working together – a commitment that I firmly believe will support our relationship in going from strength to strength.

‘Ladies and gentlemen, may I offer a toast to the President of Ireland and to the people of this wonderful country in thanks for the warmth of your welcome on what I hope will be the first of many visits for us.’

It comes after the couple got their hands dirty today, viewing a cattle field and laying hedgerows, and they enjoyed a romantic clifftop walk together after meeting young people facing mental health issues, homelessness, or drug and alcohol problems.

The Duke and Duchess of Cambridge walked arm-in-arm against a stunning coastal backdrop on the second day of their official royal tour, visiting Teagasc Animal and Grassland Research Centre in County Meath earlier today.

In brilliant winter sunshine, the husband and wife couple followed the trail to the summit of Howth Cliff, a popular tourist spot east of central of Dublin that attracts thousands of visitors every year.

They hugged as they posed for a picture, before meeting Irish environment minister Richard Bruton, who said: ‘They remarked on how you couldn’t come to Ireland and not see the coastline so they got their wish. And they saw it in a benign light, normally there is a wind howling – it’s really beautiful today, they couldn’t be luckier.’

The Duke and Duchess of Cambridge have also helped prepare the dish of the day for a group of youngsters in Ireland – after popping to a shop to teach the children about budgeting.

William and Kate joined 13-year-olds Simon and Molly to visit a village shop to buy ingredients for vegetable soup.

Their trip to the Londis store in Prosperous, County Kildare, was supposed to be a secret but by the time they got there around 200 villagers had gathered outside to see them.

William stopped to take a selfie with Jennifer Malone, who gave him a bunch of daffodils for his wife.

Philip Stynes, owner of the store, admitted he had told a few customers about the royal visit on Tuesday night and word soon spread around the village. 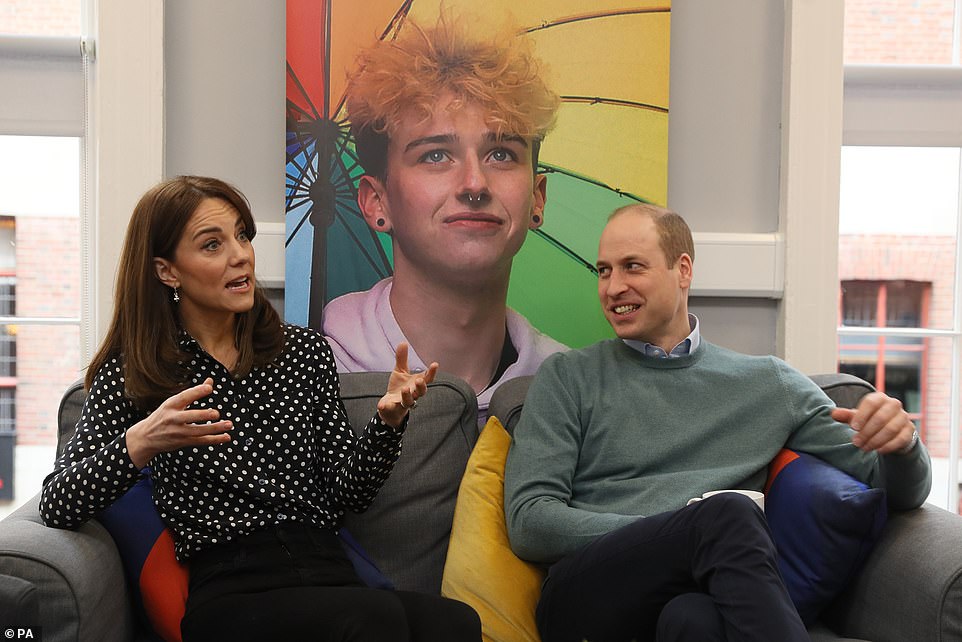 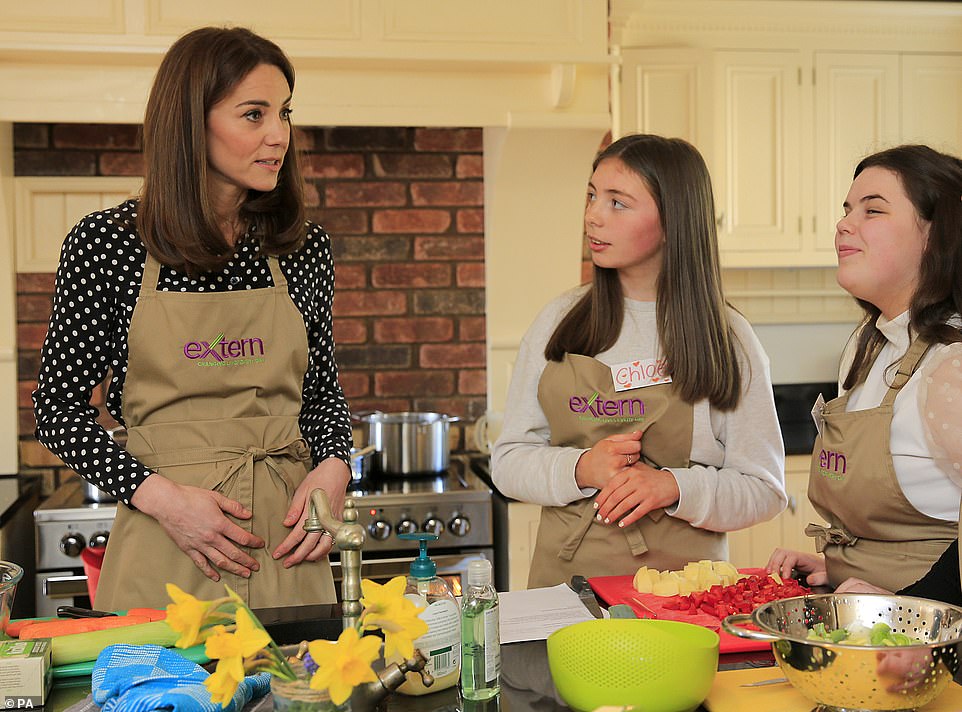 The Duchess of Cambridge prepare soup with members and staff in the kitchen area during a visit to Extern at Savannah House, in County Meath, near Dublin today

He added: ‘It just snowballed from there. But even if we hadn’t told them there would have been a big crowd. People live out on the streets here.’

Before they set off, the Cambridges inspected the fridge with the youngsters and checked the ingredients needed for the soup – all designed to teach the children life skills.

William said: ‘There’s only one leek. Do we have to stick to the menu?’

He then told the others in the kitchen: ‘We’re going to shop for you. We’ll be back in a minute. We’ll bring back all the wrong ingredients.’

The couple, who had 20 euro (£17) to spend, returned 15 minutes later with a bag of provisions including brown bread, butter and leeks.

After washing their hands, they donned aprons to help Simon and Molly, and Owen, 13, and Chloe, 15, prepare the meal for around 16 children and relatives.

Later, the couple played a game of table tennis with other young people who are supported by Savannah House, a respite centre run by social justice charity Extern.

The duchess quipped about their cocker spaniel, Lupo: ‘We try to do this at home but our dog keeps catching the ping pong balls.’

Each year around 300 children from across Ireland stay at the centre in Clane, County Kildare, for a maximum of three nights at a time to have a break from problems at home or while they are in care. 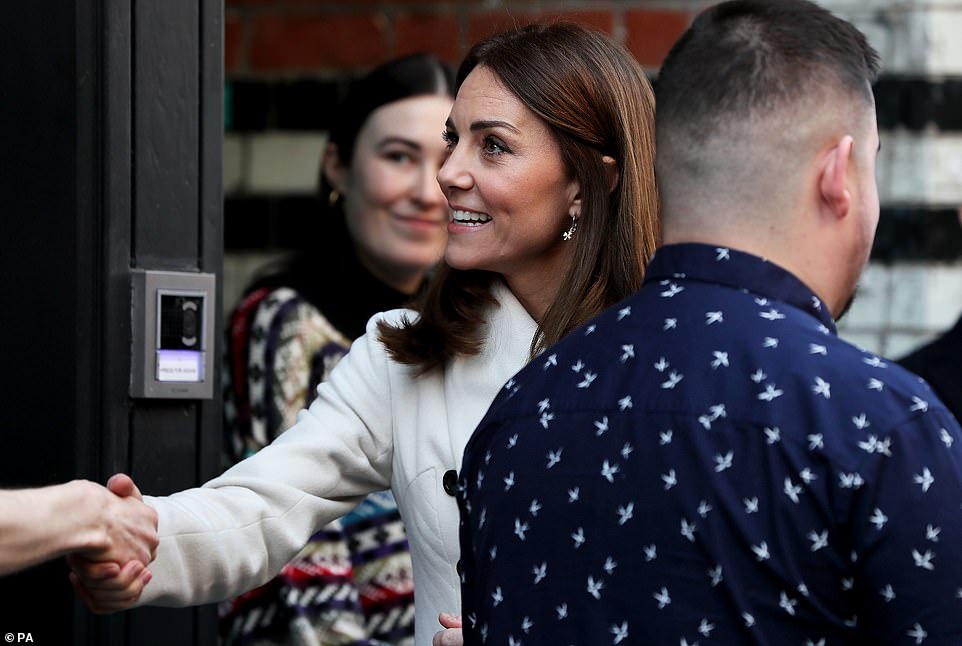 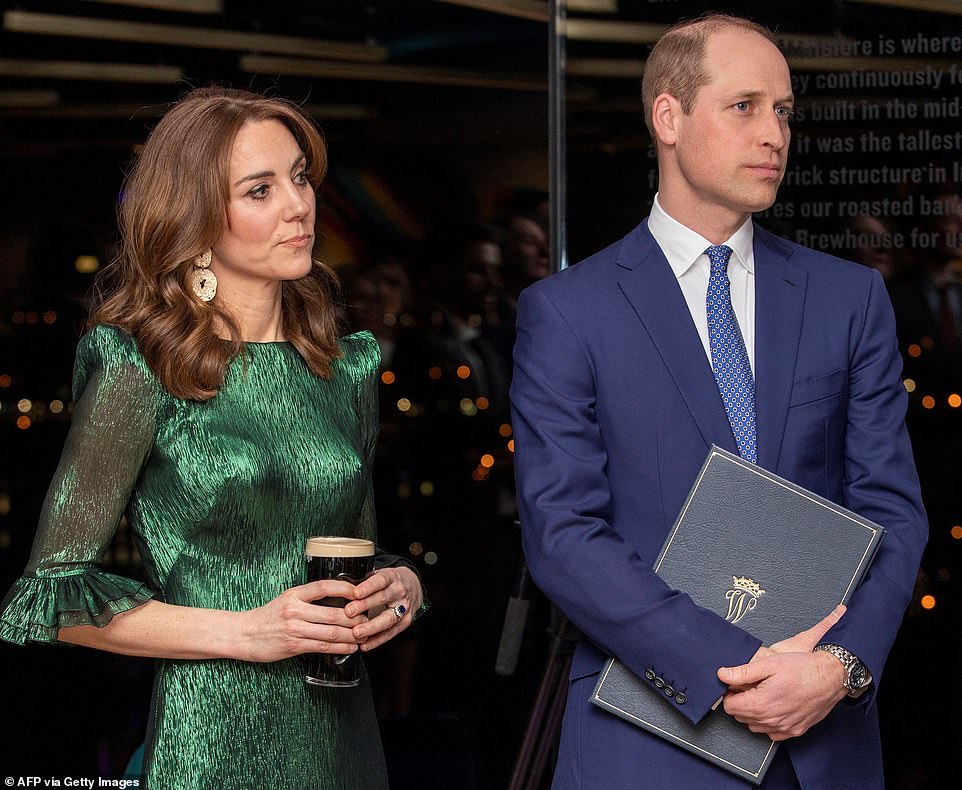 The Cambridges asked the children about whether they cook at home and what food they like.

As they washed and peeled carrots, Kate asked: ‘Do you cook any vaguely healthy things?’

William asked the boys if they like pancakes, following Shrove Tuesday last week, and added: ‘I tried to get my children to eat pancakes but they weren’t so interested this year. Maybe next year.’

Before the couple left they sat down with another group of children to help decorate bunting with their own personal messages on what they like about Savannah House.

The exercise was designed to make them take ownership of the centre and help them feel at home on their return visits, often for family therapy.

Extern supports more than 20,000 people per year, including 3,500 children in Ireland and 6,500 in Northern Ireland, affected by issues such as homelessness, drug and alcohol abuse, offending and mental health problems.

Its chief executive Charlie Mack said: ‘The children we support are truly inspirational and Extern is committed to providing them with the opportunity to discover strengths and abilities they never knew they had.’