Prince Andrew faces fresh humiliation tonight as councillors in York decide whether or not to strip him of yet another honorary title in the wake of his settled sex abuse case.

Council bosses in the northern England city will gather at 6pm to debate revoking the prince’s Freedom of the City honour, awarded to him in 1987.

The decision would not automatically strip the Queen’s youngest son of his ‘Duke of York’ title, however councillors last month suggested they would call on Buckingham Palace and the government to have it removed.

It follows a slew of authorities, institutions, schools and even golf clubs, which have all sought to distance themselves from the disgraced duke since he settled his civil case with Jeffrey Epstein sex trafficking victim Virginia Roberts.

In the wake of the case, which was settled in February, the 62-year-old was also stripped of his military roles and royal patronages and was told he would no longer be known as ‘His Royal Highness’.

The meeting in York had been scheduled to take place virtually last month but the plug was pulled just two hours before it was due to start following objections from Labour councillors.

The decision to strip the Duke of his Freeman status was due to take just 45 minutes.

It was then expected that there would be an agreement to call on Buckingham Palace and the government to remove the Duke of York title. 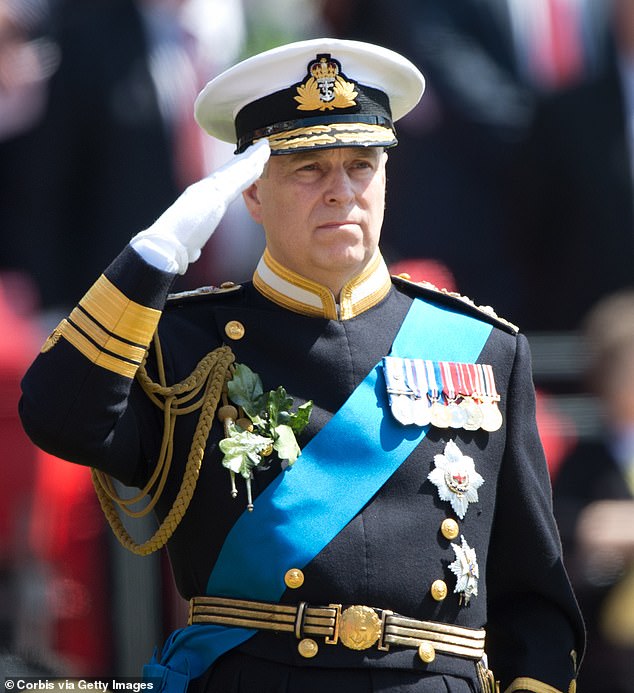 Council bosses in the northern England city of York will gather at 6pm to debate revoking Prince Andrew’s Freedom of the City title, awarded to the duke (pictured) in 1987 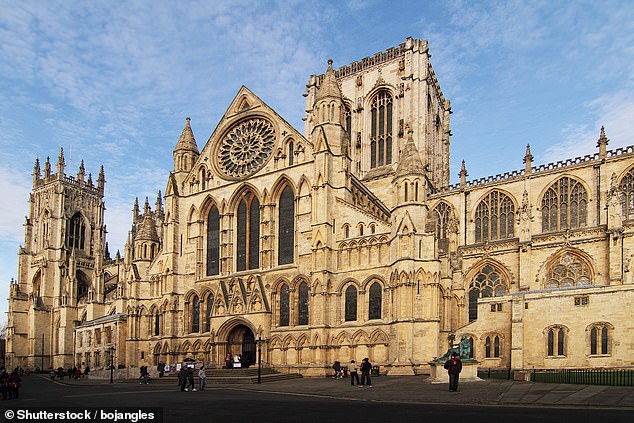 The city council meeting in York had been scheduled to take place virtually last month but the plug was pulled just two hours before it was due to start following objections from Labour councillors. Pictured: York Minster 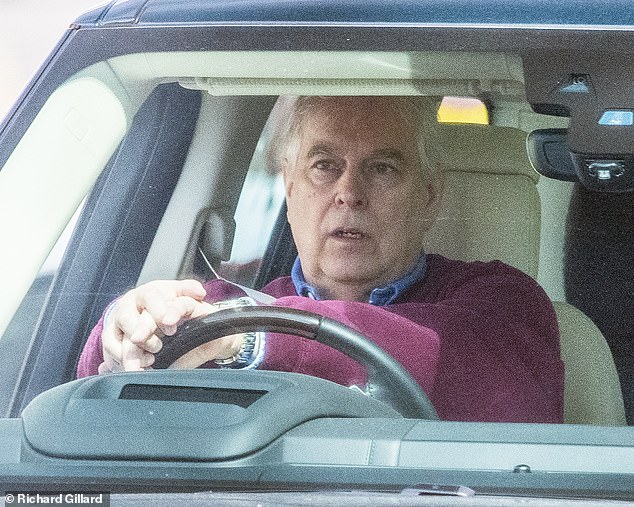 In the wake of his sex abuse case, which was settled in February, the 62-year-old (pictured driving around Windsor) was also stripped of his military roles and royal patronages and was told he would no longer be known as ‘His Royal Highness’

York City Council was set to consider the motion: ‘The Council resolves that, pursuant to Section 249 of the Local Government Act 1972, the City of York Council withdraws the Honorary Freeman of the City status from the Duke of York which was conferred upon him in 1987.’

The decision to cancel the meeting caused fury among councillors, but York Council’s Lib Dem Group said the vote would go ahead on the same motion in April.

The spokesman said: ‘The votes taken remotely would have been seen as recommendations and would have had to go to the Chief Operating Officer to be confirmed as decisions.

‘Virtual meetings took place during Covid when the COO agreed with all the recommendations. It is purely because the agenda item on this meeting was very, very political.

‘It was felt it would be better to hold it safely and properly in person once members were ready and healthy enough to attend.

‘Quite a few councillors had recently tested positive for Covid and the real concern was many of them were vulnerable.’

The Duke faces becoming the first VIP to be stripped of his Freeman status since Jimmy Savile suffered the same fate from Scarborough Council in 2011.

Ahead of the cancelled meeting last month, Darryl Smalley, a Liberal Democrat councillor for York City, told the Independent: ‘York’s unique connection to the crown and the monarch is an important part of our city’s legacy and history.

‘However, as a council and city, we stand with victims of sexual abuse and are doing all we can to end violence against women and girls locally.

‘As such, it is inappropriate that Prince Andrew retains his ambassadorial title that is intrinsically linked to our city.’

Mr Smalley had previously called on Prince Andrew to be stripped of his title. 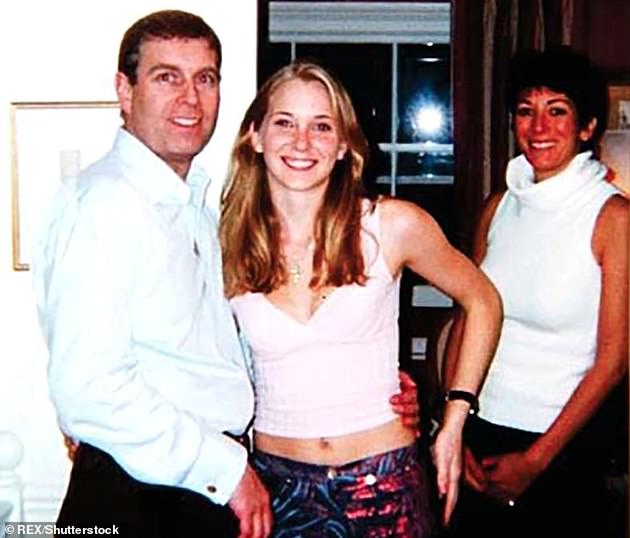 The prince pictured with his accuser Virginia Roberts and Ghislaine Maxwell, who was found guilty in 2021 of child sex trafficking

A survey by York’s daily newspaper The Press found that 88 per cent of its readers want to see the prince’s Duke of York honours taken away from him.

Phil Pinder, a retailer in the famous cathedral city told The York Press in February: ‘York deserves better. He has been stripped of his royal duties; he has done a settlement out of court ending the prospect of any kind of legal clearing of his name so the only option is for him to permanently step down as the Duke of York as well.

‘York deserves another royal to represent it instead.’

He suggested the ‘controversial’ choice of Prince Harry, who lives in the US and holds the Duke of Sussex title.

There are also multiple petitions to remove the Duke of York honour from Prince Andrew.

One with 1,500 signatories says: ‘Not only has ‘Prince’ Andrew demonstrated a lack of morals, lack of humanity and lack of judgement by protracted fraternising with Jeffrey Epstein, his recent interview confirms he lacks the ability to reflect, show insight and learn.

‘Most importantly, it reveals a total lack of caring for others.

‘These are not Yorkshire values. Having him associated with such a proud, fair and straight talking county is contradictory and embarrassing. Remove the title.’

Prince Andrew made his first public appearance since he withdrew from public life following his association with convicted sex offender Jeffrey Epstein and Ghislaine Maxwell, who was found guilty in 2021 of child sex trafficking, at the service for his father Prince Philip.

It was claimed the Queen ‘personally paid £2m to Virginia Roberts’s charity’ as part of Andrew’s £12m settlement.

‘Stipulation of Dismissal’ documents were filed with a court on March 8, with lawyers on both sides calling for the legal action to be dismissed, indicating the settlement has been paid.

As the order was published, the Treasury confirmed no taxpayer funds were used for either the payment to Virginia Roberts or for the Duke of York’s legal fees. 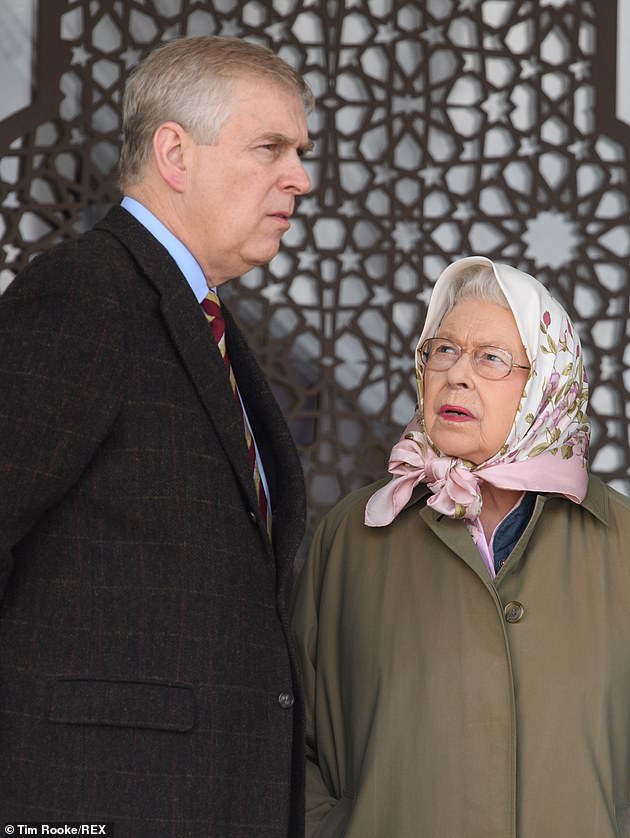 The decision to remove his Freeman status would not automatically strip the Queen’s youngest son of his ‘Duke of York’ title, however councillors last month suggested they would call on Buckingham Palace and the government to have it removed

A freedom of information request asked whether any money from the Sovereign Grant to the Royal Family or any other government money was used. The Treasury insisted: ‘No public money has been used to pay legal or settlement fees.’

The joint order filed with the New York court said each party would pay their own costs and fees.

There were reports the Queen or even Prince Charles contributed to the settlement by paying it or loaning him the money until the sale goes through of a £17million Swiss ski chalet he owns with ex-wife, Sarah, Duchess of York.

Mrs Roberts had sued Andrew for alleged sexual abuse. She claimed he had sex with her when she was 17 after he was trafficked by his friend, the late billionaire paedophile Epstein.

The duke will make a ‘substantial donation’ to a charity for sex abuse victims set up by Mrs Roberts, now a 38-year-old mother-of-three. He said he now regrets his association with Epstein.

Andrew, who was forced to step down from royal duties and public life as a result of the scandal, previously claimed he had no recollection of meeting Mrs Roberts and has always strongly denied her allegations.

He agreed to the settlement in February.

The Queen has stripped the Duke of York of his honorary military roles and royal patronages, Buckingham Palace announced this evening.

The move is a major blow to Andrew, who is facing a looming civil sexual assault court showdown after a New York judge sensationally ruled yesterday that the case could go ahead.