Pope Francis will arrive in Canada this afternoon for a week-long ‘pilgrimage of penance’ for the ‘cultural genocide’ inflicted at the country’s Catholic schools and churches.

The pontiff, 85, left Rome for Edmonton, Alberta on a private plane this morning alongside journalists and Vatican leaders.

Between 1881 and 1996, more than 150,000 Indigenous Canadian children were separated from their families and brought to residential schools.

Many were starved, beaten and sexually abused in what Canada’s Truth and Reconciliation Commission has called ‘cultural genocide.’

Francis cancelled a trip to Congo and South Sudan earlier this month amid knee ligament problems that forced him to use a wheelchair and a cane. 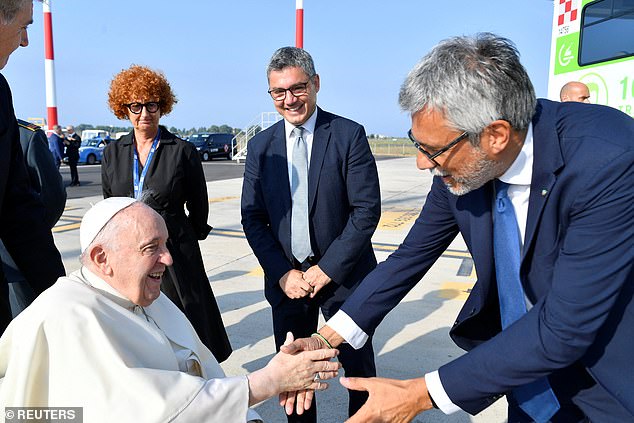 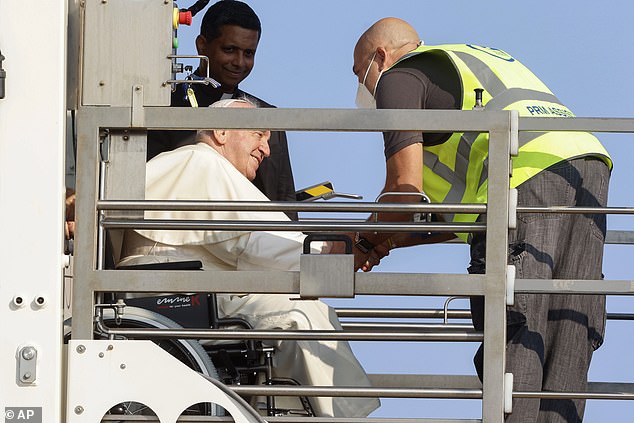 The health woes prompted chatter that he would resign – but Francis quickly swatted this away, insisting: ‘I want to live my mission as long as God allows me and that’s it.’

Canada will play host to its fourth papal visit and its first by Pope Francis.

He will meet with Indigenous Canadians on their home territory, fulfilling a promise to apologise to community leaders for the Church’s historical suppression of Indigenous culture at boarding schools. 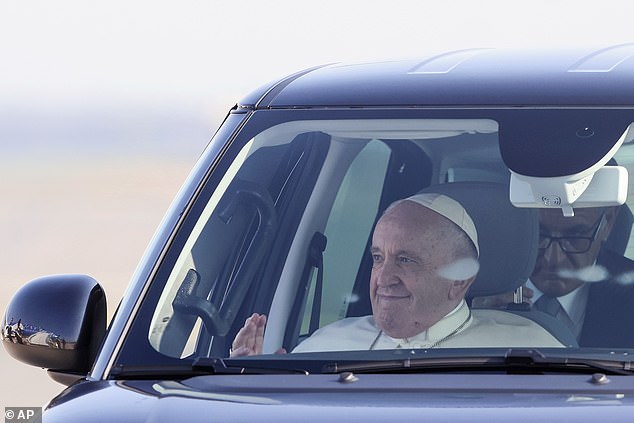 Francis will also visit Quebec City and Iqaluit, the capital of the territory of Nunavut, before leaving on Friday.

Initial blocs of free tickets for the public were nabbed within 10 or 20 minutes of being made available, a spokesperson for trip organisers the Canadian Conference of Catholic Bishops (CCCB) told Reuters.

Thousands of tickets are being set aside for Indigenous survivors of residential schools, according to the CCCB spokesperson.

Indigenous leaders in the Treaty 6 region, the Pope’s Alberta stop, said they were overwhelmed with queries from survivors wanting to attend.

While Canada’s leaders have known about high numbers of children dying at the schools since 1907, the issue was thrust to the fore with the discoveries of suspected unmarked graves at or near former residential school sites last year.

In response to pressure stemming from those discoveries, Pope Francis apologized for the Catholic Church’s role in the schools earlier this year during a visit by indigenous delegates to the Vatican.

Now he is coming to apologise on Canadian soil.

But survivors and Indigenous leaders say they want more than an apology.

Many have called for financial compensation, the return of indigenous artifacts, the release of school records, support for extraditing an accused abuser, and the rescinding of a 15th-Century doctrine justifying colonial dispossession of indigenous people in the form of a papal bull, or edict.

The setting matters, said Fernie Marty, a member of the Papaschase, a Cree nation in Alberta.

The 73-year-old is a survivor of a day school – part of a system that, like residential schools, aimed to assimilate Indigenous children.

He appreciated the pope’s Rome apology, but said: ‘This is where all the atrocities happened. It’s more meaningful coming on Canadian soil.’

Marty, an elder at Sacred Heart Church of the First Peoples in Edmonton, said the pope’s visit offers ‘a tremendous opportunity for my own personal healing.’

But George Pipestem, 79, a member of the Montana First Nation and a survivor of the Ermineskin Indian Residential School, questioned the relevance of a papal apology, just as he questioned apologies by Canadian prime ministers for the government´s role in the schools.

He said the abusers should be the ones saying sorry: ‘They’re all gone, though.

‘This apologising, it doesn´t matter to me. It’s like nothing. It’s only a word.’

The United Church of Canada, the nation’s largest Protestant denomination, apologised more than 20 years ago for its role in operating 15 residential schools for Indigenous youths.