A Christmas card has being sent to hundreds of repeat offenders across Cheshire by police to remind them to ‘think again’ before considering crime over the festive period.

The card features a mock-up Tripadvisor review of a custody suite, which is where criminals should expect to stay if they offend over Christmas, and has hilariously been rated half a star by police.

They are being sent to serial offenders across Warrington in Cheshire as part of the police’s Operation Jingle campaign, which aims keep people feeling safe and reassured over the festive period.

However, ex-Home Secretary David Mellor has branded the stunt ‘ludicrous’ after the card was revealed by Cheshire police. 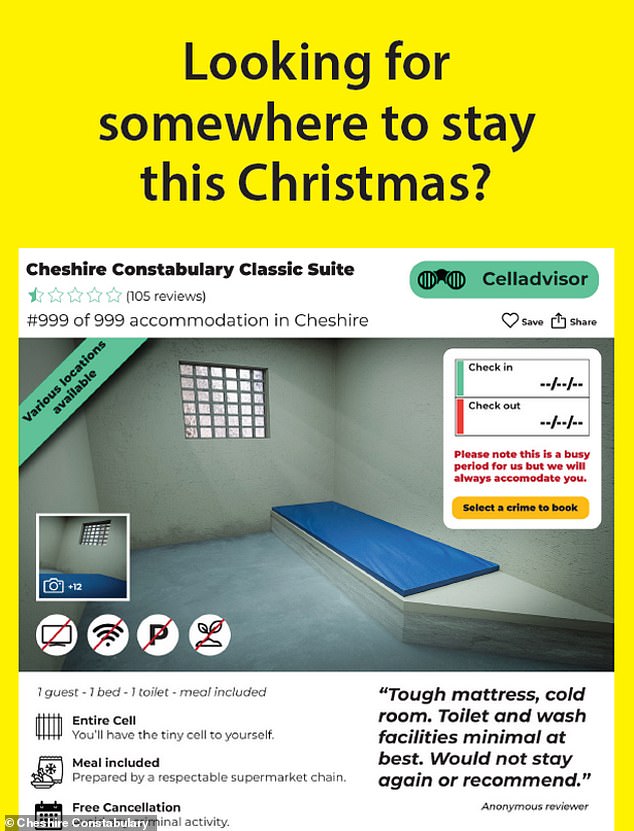 There is a message inside from Chief Constable Mark Roberts, which says: ‘Spending Christmas with us is not recommended. If you are considering committing a crime, think again.’

The card reads the ‘classic suite’ offers ‘free cancellation’ if offenders avoid any criminal activity, and says there is no television or wifi available.

An anonymous ‘reviewer’ also wrote on the spoof advertisement: ‘Tough mattress, cold room. Toilet and wash facilities minimal at best. Would not stay again or recommend.’

Chief Constable Roberts said: ‘The aim of #OpJingles is to deter criminals, catch those who are responsible for crime, minimise disruption across the county and keep people feeling safe and reassured over the festive period.

‘This card has been designed in order to remind some of our more serial offenders that crime will not be tolerated, and if you do commit crime then we will target you.

‘A custody suite is definitely not the best place to spend your time, and as you can see from the card the facilities we have are not going to be as luxurious as you would expect at home.

‘I want to reassure people that we remain resolute in our pursuit of those who believe they are above the law and will ensure they are held accountable for the crimes they have committed.’

‘We want everyone to have a good time and enjoy themselves this December, and the best way to do that is to behave responsibly and make sure you are with your families and friends for the festive period – spending the night in a custody suite is not something I would recommend.’ 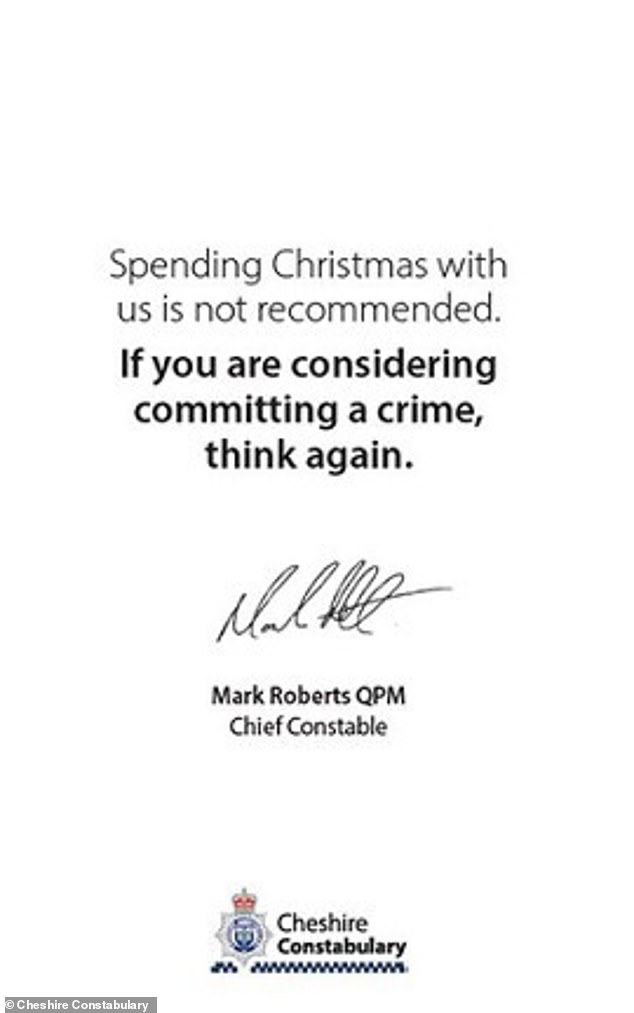 The card reads that the classic suite offers ‘free cancellation’ if offenders avoid any criminal activity, and says there is no television or wifi available

John Dwyer, Police and Crime Commissioner for Cheshire said: ‘Over my 30-year career in policing I saw plenty of people spending Christmas in the cells and I don’t imagine the experience has got any more enjoyable.

‘There’s a serious message behind #OpJingles: If you’re going to try and ruin someone else’s Christmas in Cheshire through crime, you will only end up ruining your own.

‘I hope everyone in Cheshire gets to enjoy a relaxed and responsible Christmas with their friends and family, and that anyone who wants to turn over a new leaf can do so in 2022.’