This is the adorable moment a young boy raced a real police car using his new toy police motorbike after Christmas.

In a video posted to Twitter by @PDBen1194, a Humberside Police dog handler, the four-year-old boy is seen testing out his new bike.

The police officer explained that her friend had bought her four-year-old son the toy motorbike as a Christmas present and had approached her to ‘race’ her son. 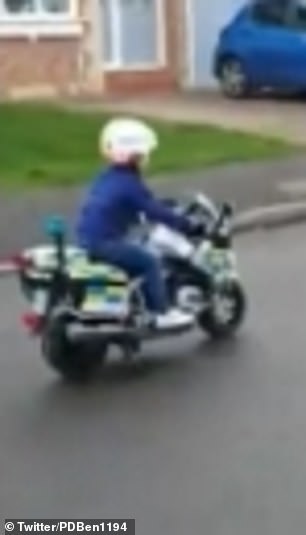 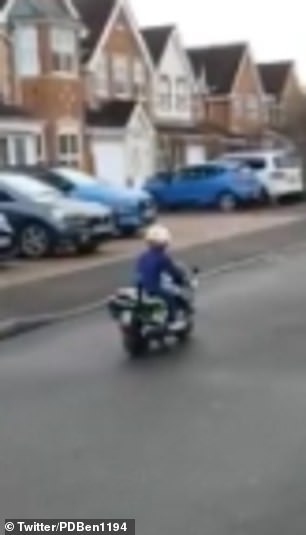 Both the video of the race and a picture showing the victorious boy alongside the police car were shared by the dog handler.

In the clip, the boy, wearing a safety helmet, is seen sitting on his new toy motorbike.

The person filming the video is heard cheering: ‘Go! Go!’

The four-year-old takes an early lead in the race and zooms off down the road.

The dog handler trails behind the young boy, driving at a slow and steady pace with the blue lights flashing, as if on a real police chase.

A caption accompanying the video read: ‘When your friends 4 year old gets a police motorbike for Christmas and asks you for a race! How could I say no to this super cute face #policeofficerinthemaking’

The video was originally shared on social media yesterday and has been watched by more than 45,000 people.

The police officer that uploaded the cute video footage is the dog handler for two police dogs: Ben, a Belgium malinois, and Poppy, a cocker spaniel. 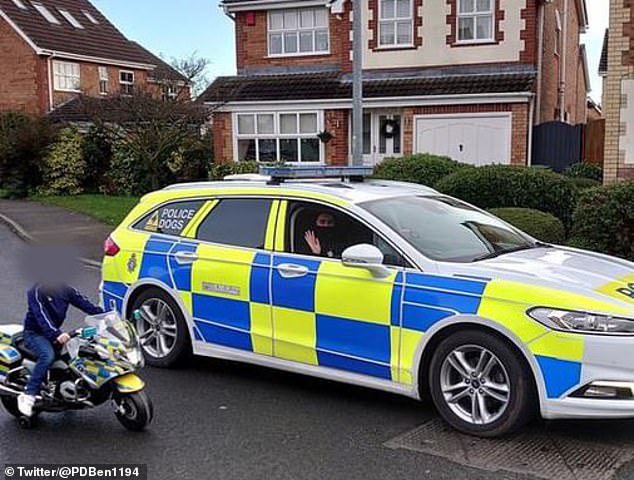 The Humberside police dog handler posed for a photo with the young racer, who sits on his toy police motorbike

People were quick to respond to the video, expressing their wonder for the footage, with one person commenting: ‘That is just too cute.’

Another said: ‘What a lovely thing to do, in these awful times was lovely to see.’

While a third responded: ‘Community policing at its finest. Made this little boys day. Well done guys.’

Tags: c, dog, Handler, in, patrol, Police
You may also like
Celebrities News