Just one in 10 homeless Victorians put up in hotels during the pandemic have been relocated to permanent homes, with Housing Minister Richard Wynne saying finding the right properties was a challenge, particularly in regional areas.

Homeless people disappeared from the streets within days in March last year after the state government paid to house them in hotels due to concerns of a COVID-19 outbreak among vulnerable rough sleepers unable to socially isolate.

In July, the state government announced more than 2000 Victorians temporarily housed in hotels would be helped out of homelessness and into their own homes under its $150 million From Homelessness to a Home package. 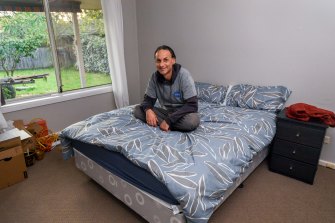 Daniel Duivenvoorden is one of the first formerly homeless people to be moved out of a hotel and into permanent housing under the From Homelessness to a Home program.Credit:Joe Armao

As of Tuesday, 195 people from 163 households had relocated to their new homes – less than 10 per cent of the target of 1845 households. More are moving in every day.

“We all want to see people moved to permanent, secure housing as soon as possible, but this is a complex process,” Mr Wynne said. “Each person has unique circumstances that lead to their homelessness and each needs different supports to ensure their tenancy endures.

“Finding the right properties is an ongoing challenge, particularly in regional areas, and you need to get that right. If the house is the wrong size or far away from friends, family and services, the cycle of homelessness will start again.”

The government is continuing to accommodate 520 people in hotels while they wait to be moved into their own homes. Others have moved to other temporary accommodation such as boarding houses, staying with friends or are back on the streets while a long-term property is secured.

The government says 1128 Victorians from 1022 households have been allocated to support providers such as Launch Housing, Uniting Vic.Tas and Unison, with further allocations happening every day.

The $150 million package also funds tailored support – including mental health, drug and alcohol, and family violence services – to help people keep their tenancy once they move into long-term housing and get their lives back on track.

“This is a chance to end homelessness permanently for thousands of people – we don’t want to rush it and miss that opportunity,” Mr Wynne said.

In July the state government pledged to lease 1100 properties from the private rental market and said the first of 1000 new social housing units – promised during the 2018 election campaign – were also becoming available.

Council to Homeless Persons CEO Jenny Smith said the hot property market had made it difficult for homeless organisations to lease properties, with vacancies at 1 per cent in some regional areas. She said it also took time to recruit skilled staff to work with formerly homeless people with complex needs.

“It’s going to take some time but we must take that time to get the right housing and put teams of people together to support sustaining that housing,” Ms Smith said.

“We’re heading in the right direction – it’s absolutely magnificent what the government has done. Colleagues in other states and territories are green with envy.”

Launch Housing CEO Bevan Warner said the program had a delayed start due to the second wave of COVID-19 and the tender process but was now gathering momentum.

He was confident that 80 to 90 per cent of Launch Housing’s 400 clients would be housed by August.

“It’s an amazing program, which will deliver life-changing results. It’s just frustrating that it’s been slower than we have all hoped.”

Uniting Vic.Tas CEO Bronwyn Pike said the community services organisation had secured properties for 60 per cent of its 221 clients.

“We do have some hot spots including Gippsland, Portland, Hamilton and Warrnambool,” Ms Pike said.

“Gippsland is an incredibly tight rental market and there is such a shortage of traders and builders that even if you secure a block of land it’s a year before you get a house builder.

“We are still looking at every option to house people.”

Formerly homeless man Daniel Duivenvoorden slept in his van around the Belgrave area for more than five years before being offered temporary crisis accommodation in a motel in August last year.

Three weeks ago, the 46-year-old moved into a two-bedroom unit in Mooroolbark under the From Homelessness to a Home program.

“It’s bloody unbelievable. They’ve given me everything to live in a proper house – a fridge, soap, a vacuum, coffee, shovel – everything you could ever need,” Mr Duivenvoorden said.

He said his psychological needs had also been evaluated.

“They really did personally help me.”

Mr Duivenvoorden started a New Enterprise Incentive Scheme to start his own bushfire management business while he was still homeless but said having a home made an “absolute complete difference”.

“It has allowed that psychological thing to occur. For me to go, ‘I can do anything, there is possibilities’. I thought, ‘I am going to give life a go’.”

Tags: 10, Cent, home, hotel, of, only, per
You may also like
Celebrities News