Infection with the Omicron coronavirus variant can also strengthen immunity against the earlier Delta strain, reducing the risk of severe disease, according to a paper released by South African scientists.

Omicron has been shown to be highly transmissible and can evade some antibodies but, after two weeks of getting symptoms, immunity to subsequent infections from the strain rose 14-fold, according to the authors led by Alex Sigal and Khadija Khan of the Durban, South Africa-based Africa Health Research Institute. A smaller improvement was found against Delta, they said. 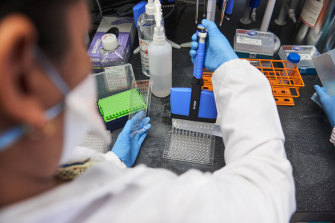 The study’s findings, which have not yet been peer reviewed, suggest the likelihood of someone infected with Omicron being reinfected by Delta is limited.Credit:Bloomberg

“If we are lucky, Omicron is less pathogenic, and this immunity will help push Delta out,” said Sigal, who has previously found a two-dose course of Pfizer and BioNTech SE’s COVID-19 shot as well as a previous infection may give stronger protection against Omicron.

The latest findings suggest the likelihood of someone infected with Omicron being reinfected by Delta is limited, reducing the presence of the latter strain. Omicron is the dominant variant in South Africa’s fourth wave of infections, delivering record case numbers, and is fast becoming the dominant strain globally.

Delta ripped through the country in July and August, leading to record hospitalisation figures. Omicron hasn’t yet had such an impact on health services.

The study is based on 15 participants, of which two were excluded as they didn’t detectably neutralise Omicron, and the data is being submitted to MedRxiv, a pre-print medical publication. It has not been peer reviewed.

Since the participants had probably suffered previous COVID-19 infections and were largely vaccinated, it’s not clear if the results show the impact on Delta by Omicron-elicited antibodies or the activation of antibodies, the authors said.