Dear oh dear, there has been some purple prose written about the death of Olivia Newton-John this week, but it was impossible to be cynical. She really was loved by those she touched. She really did do good in the time she had on Earth, especially with her openness about her own diagnosis of breast cancer, and her fund-raising for the cancer centre in her name at the Austin Hospital.

And for a generation of Australians, men and women, her performance as schoolgirl Sandy in the film Grease was a moment they remember still. Her music – never favoured by the critics – became part of the soundtrack of their lives (I do remember swooning over Hopelessly Devoted to You, but I Honestly Love You was too much for me, even then). Nobody has written anything other than she was a warm, engaging, talented human being who made people feel good. “Delightful” was a word that came up, again and again. 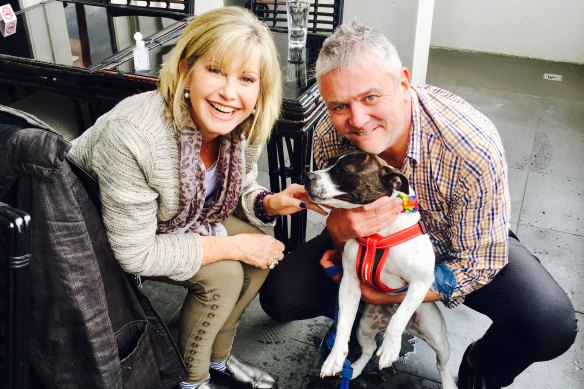 Olivia Newton-John with Neil McMahon (and dog Miss Maudie) in 2017.

Here’s Jordan Baker reminiscing about being hopelessly devoted to Olivia as a child in the ’80s.

“Our ardent renditions of Summer Nights burst eardrums, both in the 1980s and at retro nightclubs in the decades since. And then there was the old smooching trick, when you’d face the wall, cross your arms, put your hands behind your back and wriggle like you were pashing Danny at Rydell High.”

Journalist Neil McMahon, who was a friend of Newton-John’s, wrote that “she was exactly who you thought she was – you will search in vain for anyone to say a bad word about her – and she was also much more”. Neil sent pics of his dog, Miss Maudie, to Olivia in 2017 when she announced that her breast cancer had returned. She loved them. “More puppy pics, please!” she wrote back.

This week McMahon wrote “The soft-spoken girl from Melbourne had a steel inside that she showed through action, never words. You don’t conquer Hollywood as completely as she did without a rare determination and resolve. And you don’t stare down cancer over and again, as she did, without being made of sterner stuff than Sandra Dee.”

Olivia Newton-John’s death was a story that touched many of our readers. Victorian landmarks were lit up in pink on Tuesday night to mark her life, and it seems fitting that she will have a state memorial that promises to be more a concert than a funeral.

I want to let you know about a few new things at The Age. This week we launched our Opinion newsletter, and you can sign up here. It will have the best of the week’s opinion articles, the most-read opinion piece of the week, a cartoon of the week and other highlights.

Our new arts editor Elizabeth Flux has started with us, and I asked her to answer a few questions for you.

Why did you want to be arts editor of The Age?
The diversity of arts we have here is what made me move to Melbourne in the first place. Pick any day, any night, and something will be happening. Big or small, it doesn’t matter – the arts aren’t a separate thing that fits around “real” life, they’re a reflection of all of us.

What are your favourite art forms?
I don’t have a favourite – they each offer something completely different. My favourite works though – whether it’s a painting, opera or a show on TV – are ones that allow you to experience things through someone else’s mind, giving you a glimpse into emotions and eras and moments in a way that otherwise would stay out of reach.

Favourite artist?
Ever since I heard about Eugene Von Bruenchenhein I’ve been fascinated. He was an outsider artist who worked as a baker but over his life produced thousands of surreal paintings and sculptures and dramatic photographs of his wife. He became famous after his death, but how many stories like his are out there? How many people are producing work that would be loved if they just showed it to someone? A few years back, I went to an exhibition of Robert Klippel’s work and I loved it – especially the sculptures made from salvaged materials that would otherwise be thrown away – but it reminded me just how narrow the line is for creatives between being seen and being invisible.

What are you most looking forward to seeing over the next few weeks?
My calendar is always full of book launches and a few live shows and operas – before taking on the role of arts editor I was The Age’s opera reviewer. Christopher Chen’s play Caught is starting in Melbourne soon, and I’m looking forward to seeing how it twists and bends expectations. The Archibald Prize is travelling to Bunjil Place next month and it will be interesting to see these images I’ve only experienced through a screen and see how they feel in real life.

Your recommendations?
ACMI’s permanent exhibition The Story of the Moving Image is one I think can slip under the radar if you live in Melbourne because mentally you put it in the “maybe later” box. It’s also always good to look up your local small gallery and see what’s on because there’s often something new or surprising or unsung.

Elizabeth is a regular contributor to our weekly Culture Fix newsletter, highlighting the best arts and culture on around town. You can sign up for it here.

Still on arts and culture, the Melbourne Writers Festival begins on September 8 and don’t forget that Age subscribers are eligible for 20 per cent discounts on tickets. Check out the offer here and browse the festival program here.

The Age is a media partner of the festival, and we have our own event: Hard Pressed: Is Investigative Reporting in Peril? It will feature investigative reporters Nick McKenzie from The Age, Kate McClymont form The Sydney Morning Herald and Louise Milligan from the ABC. It will be moderated by The Age deputy editor and investigations editor Michael Bachelard. Do come along and say hello.

Particularly if you have children at school, do look out for our Schools that Excel coverage next week. We do this every year, and the aim of it is to look beyond the top-ranking schools to connect data for each school over the course of a decade, so readers can see progress that wouldn’t show up in a single year. It always highlights all kinds of wonderful schools.

Gay Alcorn sends a newsletter to subscribers each week. Sign up to receive her Note from the Editor.