New East London station opens: Customers board trains for first time at Barking Riverside Overground ahead of construction of 10,000 homes beside Thames

Customers have boarded trains for the first time at London’s newest Transport for London (TfL) station in Barking Riverside ahead of the construction of more than 10,000 homes in a massive regeneration project.

London Mayor Sadiq Khan, who was at the new Overground station this morning as it fully opened to the public, called it a ‘game changer’ for this part of east London.

The station has been linked up to the existing Tilbury line, with four trains an hour now leaving the station on the line to Gospel Oak Station (via Barking).

The extension to station has been mooted for almost a decade, and has been built to serve people moving into homes being built next to the Thames as part of the Barking Riverside project.

This will see more than 10,000 new homes built on brownfield land, including the site of the former Barking Power Station, and is expected to have a population of more than 26,000 when finished in the 2030s.

The station and link, which is thought to have cost more than £300 million, was originally due to open last year before being put back to autumn 2022.

However, it has now opened ‘early’ with a ceremony today and a visit from the mayor, who called the development ‘really exciting’. 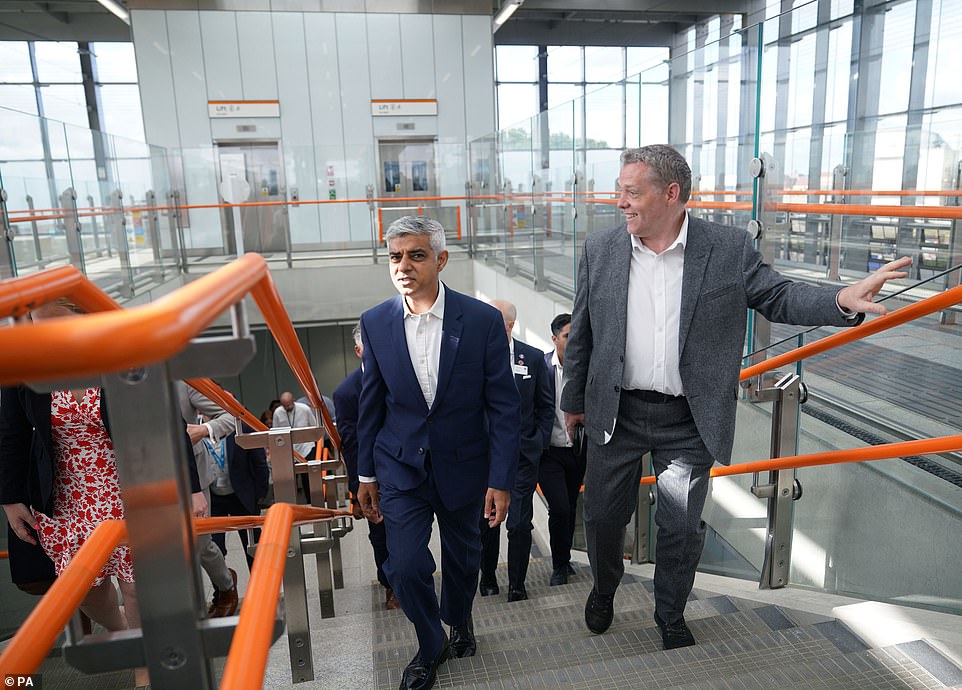 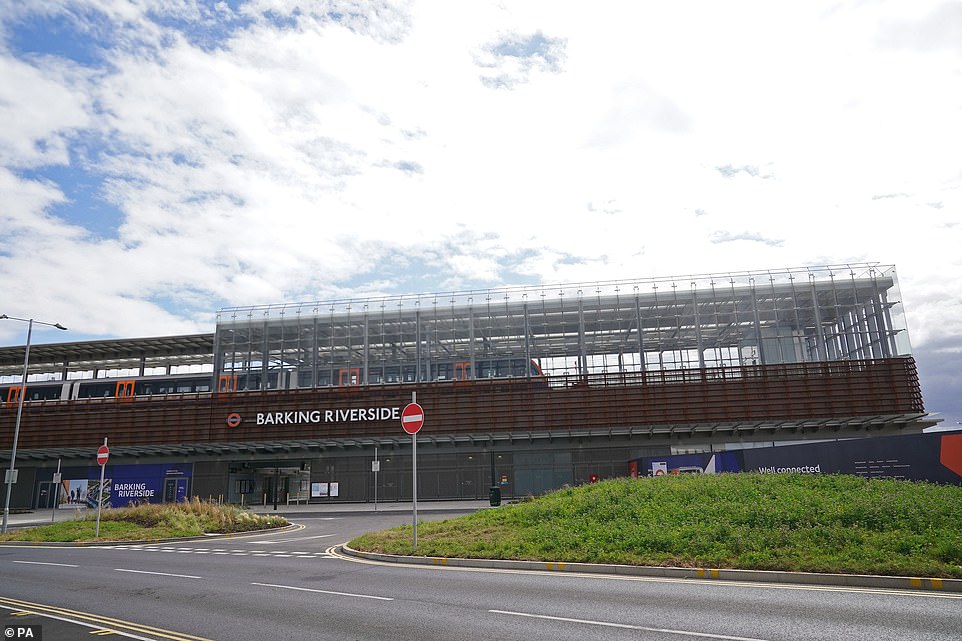 The new station has been built to serve people living in 10,000 new homes that are being constructed next to the River Thames 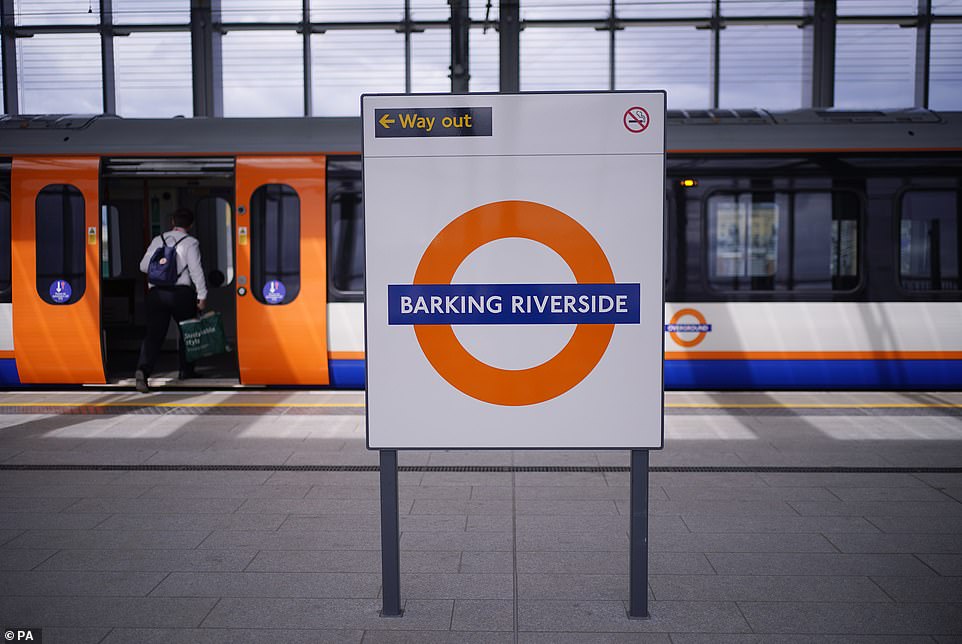 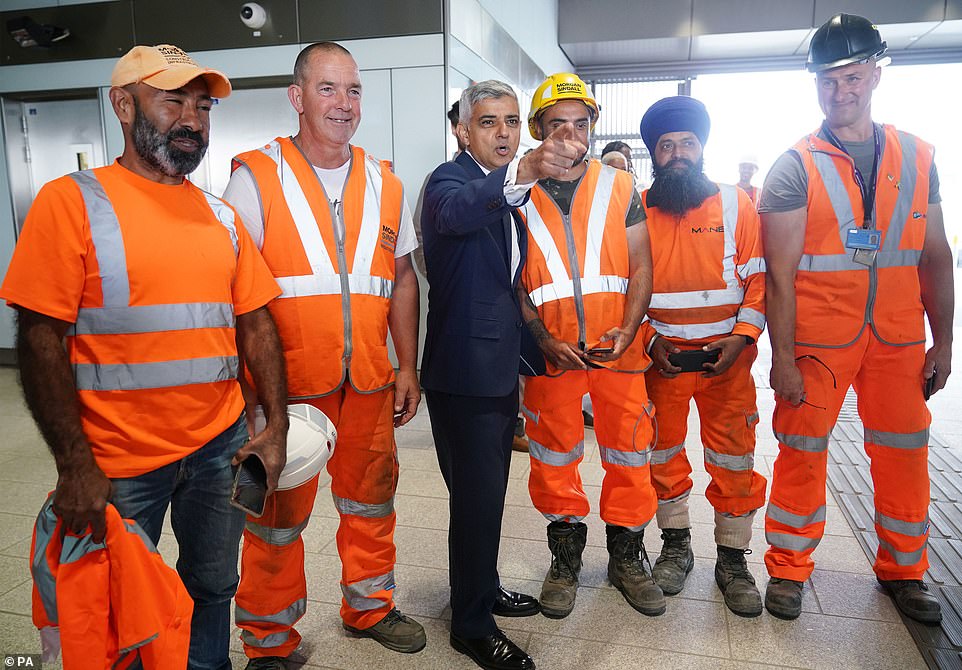 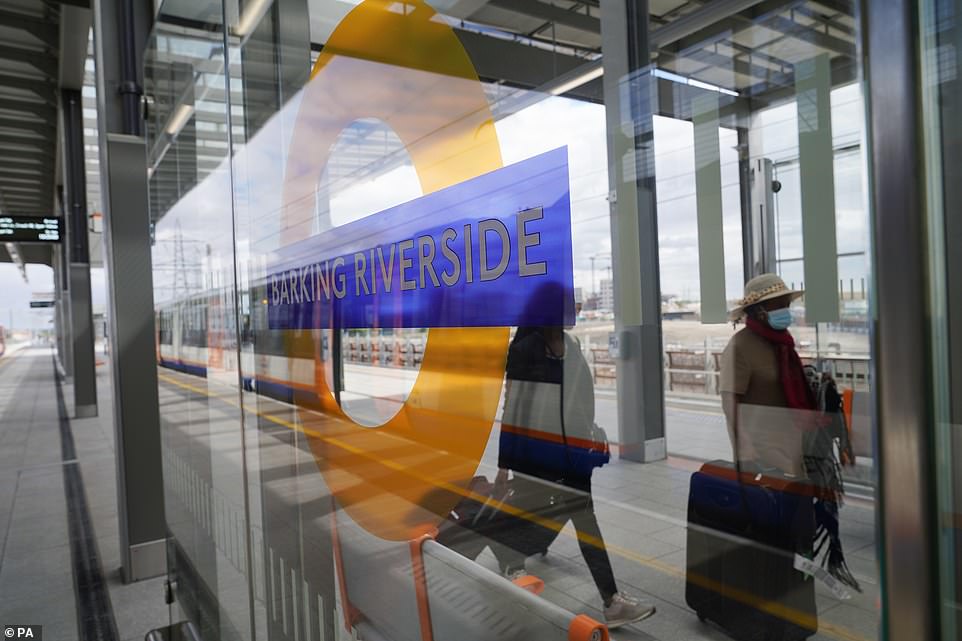 The station was supposed to open last year, but this was pushed back to autumn 2022. However, TfL ended up opening it for the first time in July

Speaking at the station, Mr Khan said: ‘This extension is a real game changer because you’ve got now not just the connection from Gospel Oak to Barking Riverside, the London Overground, that enables people here to get to the Tube, to the Elizabeth line, to the c2c – that is really important.

‘Without this extension (and) without decent public transport, people will understandably jump in their cars and you don’t tackle climate change unless you have reductions in carbon emissions.

‘So that’s what public transport allows. But also you don’t get improvements in air quality without people using cleaner forms of transport. That’s what this is.’

Transport for London (TfL) claims the trains mean people can connect to Barking from the station in seven minutes, and can be in central London in just 22 minutes.

It opened for the first time last week, before closing over the weekend for essential engineering work to be carried out by Network Rail, before reopening seven days a week today. 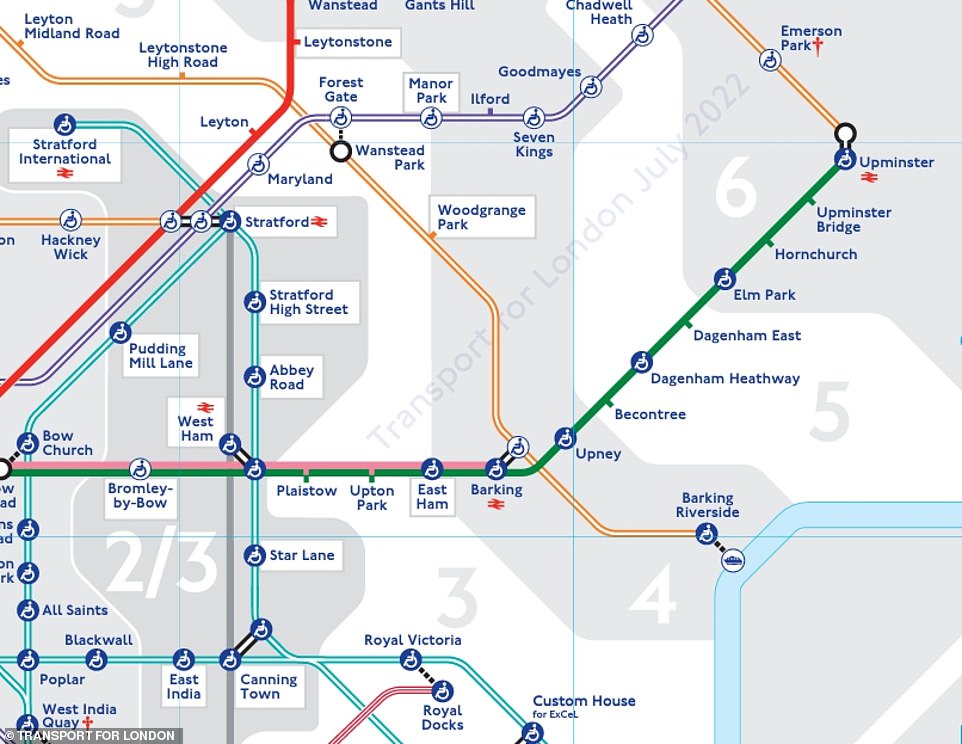 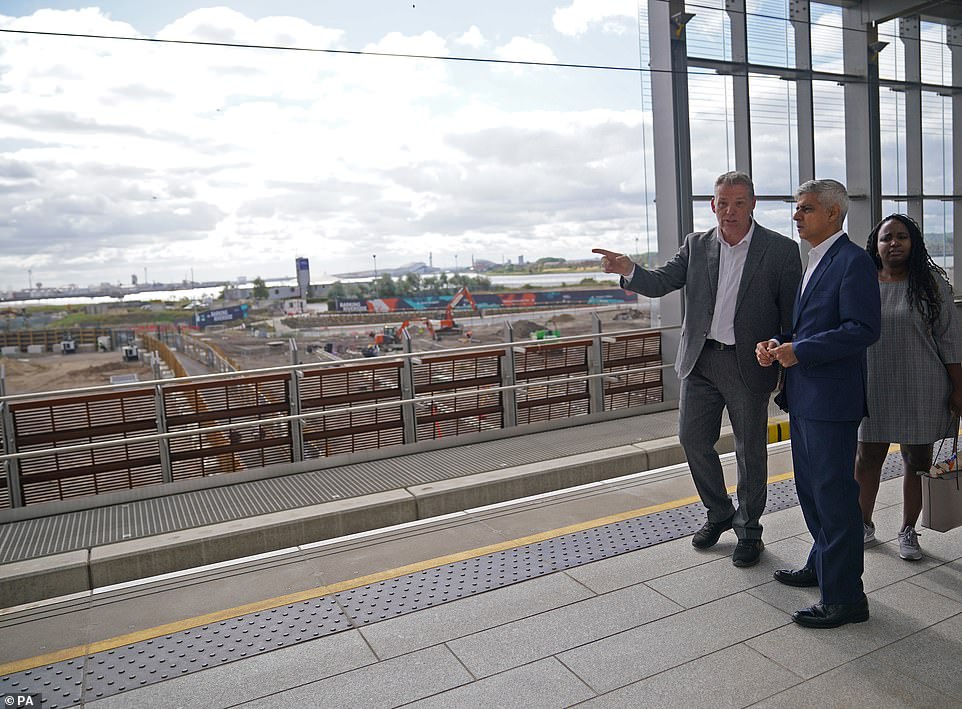 The station offers views of the Thames at the moment (pictured here in the background), but as the development is built this will become blocked by buildings 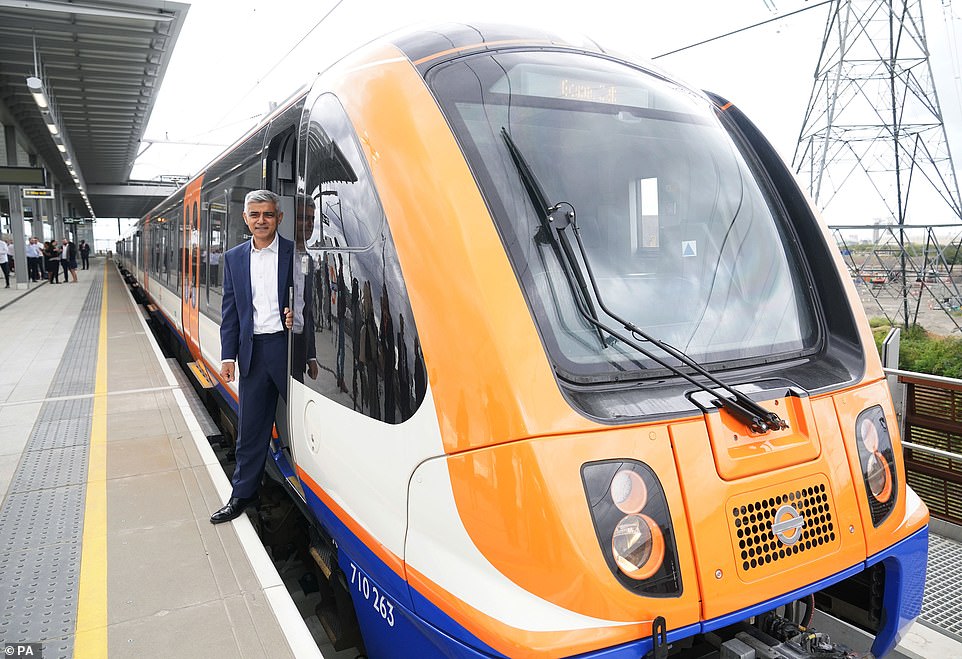 There will be four trains an hour running from Gospel Oak (via Barking) to the new station, with TfL saying people travelling from Barking Riverside can reach central London in just 22 minutes

The long awaited station was built to service thousands of people living in the new Barking Riverside development, which won’t be finished until the 2030s.

It is being built by a joint partnership of property developer Bellway Homes and Greater London Authority Land and Property (GLAP), with Bellway listing properties as being for sale from £398,995 in the  new Fielders Quarter.

Bellway said these homes would appeal to ‘families, first-time buyers, and commuters travelling to central London’.

When finished it is expected a total of seven new schools will have been built in the area, along with new GP surgeries, a leisure centre and three ‘neighbourhood centres’.

At the opening today, Mr Khan hit out at the Government as the ongoing dispute over funding for TfL rumbles on.

The transport body has been been operating on a series of emergency short-term funding deals since falling into financial trouble during the pandemic, and Mr Khan said a new proposal from the Government was still being considered.

‘The indications so far from the Government is not that they’ll give us a deal that we need, but let’s wait and see what the actual deal is in detail. Our officials have been examining it all weekend.’

He said ‘a win-win outcome’ would be for the Government to give TfL a long-term capital deal to allow new bus contracts, which would avoid making cuts and provide revenue support for 2022/23.

He added: ‘If TFL isn’t firing on all cylinders because of Government decisions, that inhibits the ability of our businesses to make profits to flourish and thrive, which means less money for the Government to distribute around the country.’

Mr Khan said ‘cutting London’s money is like them cutting their nose to spite their face’.