Veterans who served in Northern Ireland will be excluded from new legislation designed to protect soldiers from ‘vexatious claims’.

A new Overseas Operations Bill will be introduced today to protect veterans accused of wrongdoing on the battlefield abroad.

But crucially the Bill will not apply to soldiers who served in Northern Ireland, nor will it apply retrospectively to Afghan and Iraq veterans. 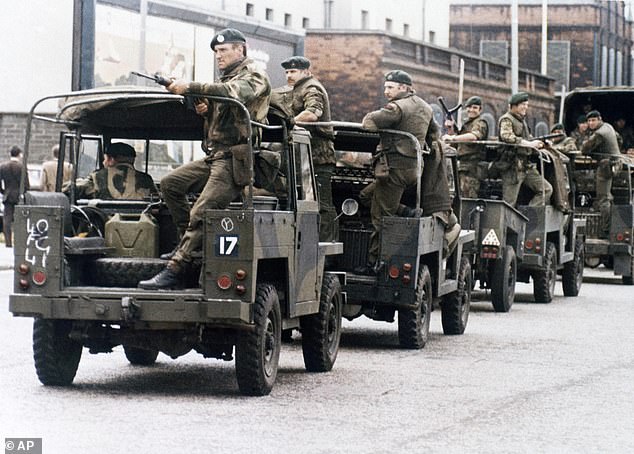 An armored convoy of British troops moves through the streets of Londonderry, Northern Ireland in 1972 (file image)

Yesterday former soldier Dennis Hutchings, 78, who is accused of a Troubles-related shooting over four decades ago, said: ‘It is outrageous. Our politicians should be ashamed of themselves for allowing this discriminatory treatment of veterans to continue.’

But last night the Northern Ireland Office announced the establishment of a new independent body that will examine all the unresolved deaths during the Troubles.

Only cases where there is new compelling evidence and a realistic prospect of a prosecution will be investigated. And once cases have been considered, they will not be reinvestigated.

Secretary of State for Northern Ireland Brandon Lewis said: ‘We owe a huge debt of gratitude to our Armed Forces for their service in Northern Ireland. That’s why these proposals deliver on our promise to protect veterans from vexatious claims.’

Under the Government’s measures announced today, there must be an exceptional circumstance in order for a prosecution more than five years after the event.

Military personnel can also not be prosecuted unless there is compelling new evidence along with consent from the Attorney General. The Bill aims to protect veterans in the future but had it been brought in 15 years ago, 90 per cent of the investigations that took place into Iraq and Afghan veterans over the past few years would not have happened.

Military operations in Iraq resulted in 1,000 compensation claims against the Ministry of Defence for unlawful detention, personal injury and death.

But if people try to bring fresh cases concerning the wars in Iraq and Afghanistan, they will fall under the new rules and will likely be thrown out.

Defence Secretary Ben Wallace said: ‘For decades our Armed Forces have been faced with the prospect of repeated investigations by inquest and police – despite the vast majority having acted in accordance with the rule of law and often at great personal risk.

‘That is why the Government will today legislate to protect our veterans where there is no new evidence against them.’

And Minister for Defence People and Veterans Johnny Mercer said: ‘Today we deliver on our promise to tackle vexatious claims against our Armed Forces. This has gone further than any other government to protect personnel who put their life in jeopardy to protect us.’

The law follows a consultation launched last July which heard the public’s views on the proposed legislation.

Tags: 'No, Bill, new, protect, won’t
You may also like
Celebrities News