Tel Aviv: Shrugging off his looming criminal trial, Israeli Prime Minister Benjamin Netanyahu claimed victory after exit polls indicated he led his Likud Party to a first-place finish in the election, the country's third in less than a year.

But it wasn't yet clear whether Likud and its allies would marshal a majority in the 120-seat parliament, or Knesset, which Netanyahu would need to govern.

"A giant victory for Israel," Netanyahu, 70, tweeted after the projections were released. 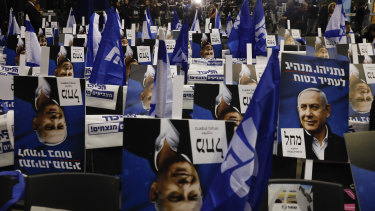 And his apparent triumph, if projections are borne out by official results, could plunge the country into a constitutional crisis over whether a leader facing felony corruption charges should be allowed to form a government.

The 70-year-old Prime Minister – a polarising figure whose long political career has brought him adoring supporters as well as furious critics – sounded ebullient over the results.

"We won, thanks to our belief in our path," he wrote on Twitter early on Tuesday. Flag-waving supporters gathered at Likud headquarters to celebrate.

By contrast, the mood was gloomy at the headquarters of his rival Benny Gantz's Blue and White party, although the ex-military chief did not immediately concede defeat. On Twitter, he thanked his supporters, but in subdued tones.

"I will continue to fight on your behalf," wrote Gantz, who tried to make a case to voters that Netanyahu was morally unfit to serve, but was criticised for a lacklustre campaign.

The outcome appeared to break more than a year of bitter political deadlock, in which Netanyahu and Gantz battled to inconclusive finishes in elections in April and September, and neither was able to cobble together a parliamentary majority.

Many Israelis dreaded the prospect of another election. But despite fears of voter fatigue after previous balloting, Monday's vote was driven by robust turnout, particularly in strongholds of Netanyahu's party.

The exit polls on Israel's main television channels projected that Netanyahu's conservative Likud, together with its religious-nationalist partners, would garner 59 seats – two short of a majority in the Knesset.

His opponents were together projected to get a majority of 61 seats. But with his main challenger, the centrist Blue and White party, trailing Likud by several seats and the rest of the opposition fragmented, polls were pointing to a continued paralysis of Israel's political system.

Official results slowly trickled in and by early Tuesday morning about 14 per cent of the ballots had been counted.

The centre-left bloc led by Gantz's Blue and White party was projected to win 52 to 54 seats. But the exit polls sometimes diverge from the official result, which was not expected until late Tuesday or Wednesday.

Addressing a raucous crowd of thousands of ecstatic supporters at 2.30am, Netanyahu said his era wasn't over.

"This is a victory against all the odds, because we stood against powerful forces," he said. "They already eulogised us. Our opponents said the Netanyahu era is over."

A Likud spokesman said that after the exit polls were released Netanyahu telephoned the leaders of parties that have already partnered with Likud and "they agreed to form a strong, national government in Israel soon."

If Netanyahu's projected edge holds, legal challenges are expected as to whether an election victor who is under indictment can be given the mandate to form a new government – something that the head of the leading vote-getting party is usually asked to do.

Analysts said the early projections seemed to bear out the leader's reputation as a consummate political survivor.

"While we need to wait for the final results, there is no doubt that Prime Minister Netanyahu has won a significant political mandate from the Israeli people," said Yohanan Plesner, president of the Israel Democracy Institute. "At the same time, the country is heading toward constitutional uncertainty."

If he does secure a victory, Netanyahu appeared ready to use his power to try to undermine court proceedings against him. His allies have already said they will seek to pass a law that would preclude or freeze the prosecution of any sitting prime minister.

But legal experts are sceptical that such a measure, even if passed very quickly, could affect the course of a trial set to begin very soon, on March 17.

Netanyahu, accused of bribe-taking, fraud and breach of trust, is the first Israeli prime minister to be indicted while in office.

Prosecutors who charged him in three separate criminal cases said Netanyahu accepted lavish gifts and used improper measures to try to influence media coverage. The Prime Minister has railed against what he calls a rigged judicial system, calling the charges against him a "witch hunt."

The campaign was an ugly one, up to the end. On election day, Netanyahu's social media accounts showed a misleadingly edited video, in which a mumbling Gantz appeared to tell a crowd to vote against his Blue and White party. In fact, Gantz called for support.

Netanyahu, as in past votes, received a pre-election boost from US President Donald Trump, who in January unveiled a Middle East plan that grants most of Israel's wishes but that Palestinians consider a death knell to their statehood hopes. 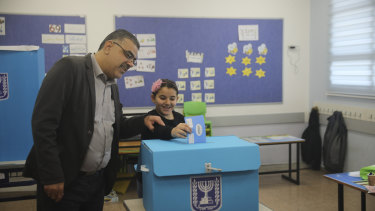 A man and his daughter vote during elections in Tamra, an Arab town in Israel.Credit:AP

During his time in office, Trump has also handed Netanyahu other significant concessions that reversed decades of US policy, including moving the US embassy to Jerusalem and recognising Israel's sovereignty over the Golan Heights, seized from Syria in 1967.

Palestinians were crestfallen at the projected outcome of the vote. "Settlement, annexation and apartheid have won the Israeli elections," Saeb Erekat, a longtime Palestinian negotiator, wrote on Twitter.

As he has done before previous votes, Netanyahu pledged to move toward annexing Jewish settlements in the West Bank if he is able to form a government. Most of the outside world considers the settlements illegal under international law.

In the last vote, in September, Gantz's Blue and White won one more parliamentary seat than Netanyahu, and the retired general hoped to match or surpass that performance. He sought to make the race a referendum on the Netanyahu's character, likening him to a mobster.

The two main parties have similar views on security matters, including on Iran and dealings with the Palestinians. But Gantz has evinced more openness to negotiating Palestinian statehood, which is envisioned in the Trump plan, but with onerous obstacles.

Arab citizens of Israel make up about a fifth of the electorate, and in the last vote, the Arab parties formed a bloc called the Joint List, which performed strongly, garnering 13 parliamentary seats. Pre-election polls suggested a surge of support for it, which appeared borne out by exit polls.

Throughout the campaign, Netanyahu sought to inflame his nationalist base by warning that Gantz, if victorious, would depend on the Arab parties for parliamentary support.

Because smaller parties can be kingmakers under Israel's political system, the final showing by the secular ultranationalist party Yisrael Beiteinu will be closely watched.

The party is led by Avigdor Lieberman, an immigrant from the former Soviet Union and a former defence minister who is an erstwhile ally of Netanyahu, but the two had a falling-out and did not team up during the Prime Minister's previous effort to form a coalition government.

Anshel Pfeffer, who wrote a biography of Netanyahu, said on the website of the left-wing Haaretz newspaper that a win for the veteran politician would be a "stunning comeback" for a man "who doesn't lie down after a setback".

He goes on trial March 17 for charges of bribery, fraud and breach of trust stemming from accusations he accepted lavish gifts from billionaire friends and promised to promote advantageous legislation for a major newspaper in exchange for favourable coverage. He vowed he will prove his innocence in court.

Like many countries around the world, Israel has seen cases of coronavirus – at least 10 confirmed so far, and more than 5500 people under quarantine. To accommodate them, election officials set up special polling places in sterile tents.

Tags: declares, in, Netanyahu, victory
You may also like
Celebrities News