Paris: France will bring forward its night curfew by two hours to 6 pm and expanding it nationally as of Saturday and strengthening border controls as it tries to slow the spread of coronavirus infections, Prime Minister Jean Castex said on Friday (AEDT).

"This measure is effective on the health situation," Castex said. He said areas already with the earlier curfew had two to three times fewer new cases than other areas of France.

Castex said the government would do all it could to avoid shutting down schools but that if the epidemic got out of hand it would put the country back under lockdown. 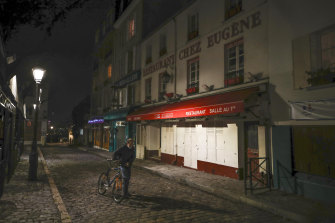 A man pushes his bicycle along a row of closed restaurants in Montmartre, Paris, during a late curfew.Credit:AP

France's COVID-19 death toll is edging towards 70,000, the seventh highest toll in the world.

Big chunks of the country, including most of its regions that border Belgium, Germany, Switzerland and Italy, already faced 6pm-to-6pm restrictions on movement. 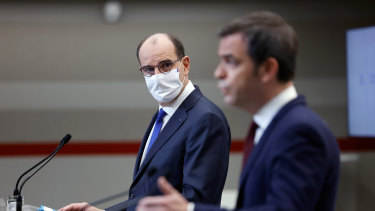 Until a couple of weeks ago, the nightly curfew didn't kick in until 8pm in Prat's department, the Marne. Customers still stopped to buy bottles of his family's bubbly wines on their way home, he said. But when the cut-off time was advanced to 6pm to slow viral infections, the drinkers disappeared.

An earlier curfew combats virus transmission “precisely because it serves to limit social interactions that people can have at the end of the day, for example in private homes,” French government spokesman Gabriel Attal said ahead of Castex's announcement. 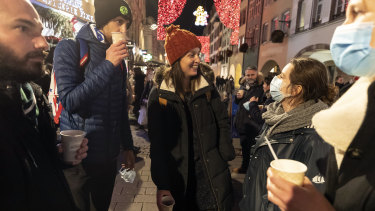 People enjoy a glass of mulled wine in the street before the curfew in Strasbourg, eastern France in December. The country was one of the first to introduce a tough lockdown last year, but soon relaxed the rules.Credit:AP

The number of COVID-19 patients in hospital has been stable at 24,000 to 25,500 for five weeks. But health officials are worried by the more-transmissible variant first detected in Britain, which now accounts for about 1 per cent of new cases in France.

From Monday all travellers coming to France from outside the European Union will have to show a negative COVID-19 test and self-isolate for a week upon arrival.

"We must do everything to prevent this variant from spreading in France," Health Minister Olivier Veran said.

Overnight curfews have become the norm in swaths of Europe but the 6pm-to-6am restriction is the toughest anywhere in the European Union's 27 nations. Others countries' curfews all start later and often finish earlier.

In Italy, it runs from 10pm to 5am, as does the Friday night to Sunday morning curfew in Latvia. Regions of Belgium that speak French have a 10pm to 6am curfew while in Belgium's Dutch-speaking region, the hours are midnight to 5am.

People out between 8pm and 5am in Hungary must be able to show police written proof from their employers that they are either working or commuting.

There are no curfews in Bulgaria, Croatia, Denmark, Estonia, Finland, Ireland, Lithuania, Malta, Sweden, Poland or the Netherlands, although the Dutch government is thinking about whether imposing one would slow new COVID-19 cases.

In France, critics of the 6pm curfew say the earlier time actually crams people together more after work, when they pile onto public transport, clog roads and shop for groceries in a narrow rush-hour window before they must be home.

Women's rugby coach Felicie Guinot says negotiating rush-hour traffic in Marseille has become a nightmare. The city in southern France is among the places where the more contagious virus variant has started to flare.

“It's a scramble so everyone can be home by 6pm,” Guinot said.

The national curfew will initially last for 15 days.

"The situation doesn't require that we impose a new lockdown," Castex said. But the government would be swift to order a new confinement if the epidemic worsened.

France has been slower than neighbours such as Britain and Germany to deploy a vaccine, but Veran said about 318,000 people had now been inoculated and that the country was on track to deliver more than 1 million COVID-19 shots by the end of the month.

Tags: 6am, 6p, curfew, from, National, to
You may also like
Celebrities News