A Muslim schoolgirl’s parents have been threatened with legal action for refusing to send her to school in a shorter skirt because it is ‘against her religious beliefs’.

Siham Hamud has been wearing an ankle-length skirt to school for years, but was shocked when teachers allegedly said the attire was incorrect school uniform last month.

The 12-year-old said she felt ‘bullied’ by the school because of her religious beliefs.

Her father Idris Hamud, 55, said Siham was sent home from school to change every day in December, and told to come back wearing the correct uniform – but she refused.

Uxbridge High School says girls should wear black trousers or a black pleated skirt from official uniform suppliers – which the family claims falls above the knee.

But dad-of-eight Idris claims both uniform choices contravene the family’s strict religious beliefs as the traditional branch of Islam they follow believes women should only wear long skirts.

The school in Hillingdon, Middlesex, has now threatened to action steps to take Idris and wife Salma Yusuf, 44, to court over Siham’s alleged unauthorised absences. 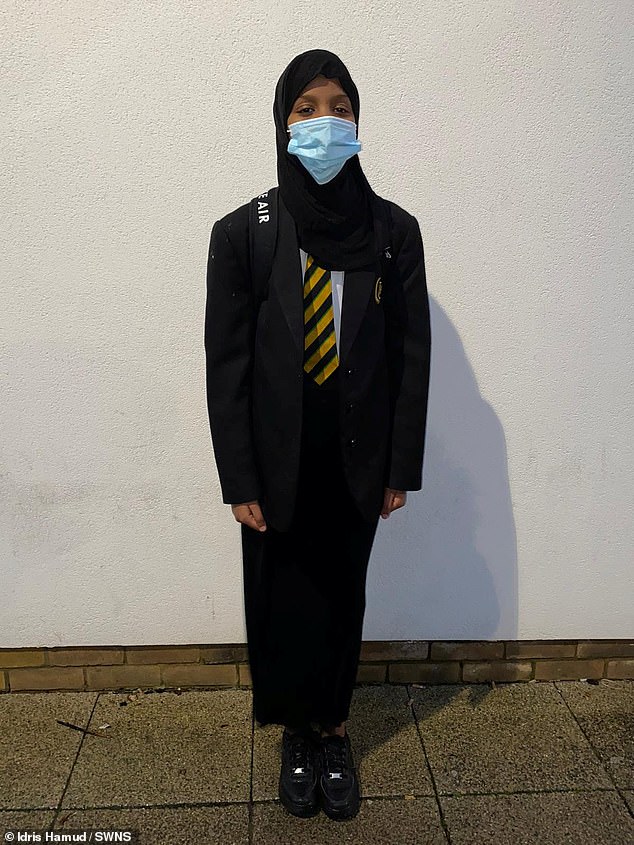 Uxbridge High School pupil Siham Hamud, 12, (pictured) has been wearing an ankle-length skirt to school for years and was shocked when teachers allegedly said the attire was incorrect school uniform

Uxbridge High School says all school uniform should be purchased from their official suppliers.

Trousers should be plain black and loose fitting, with leggings and jeans banned.

Year 7 female students are required to wear pleated tartan skirts, which must be paired with a white blouse and a ‘house pin.’

Girls in years eight to 10 at the school wishing to wear a skirt ‘must purchase the black pleated skirt from our uniform suppliers’, the school states.

Pupils are also told they must wear a black blazer and jumper with a school crest to complete the uniform.

Siham, who is currently studying from home due to Covid lockdown restrictions, said: ‘It feels like bullying because of what I believe.

‘I think they should just let me wear my school uniform to school.

‘I like school normally, and English, drama and RE are my favourite lessons but I couldn’t attend.

‘I find it annoying because I’ve missed a month of school, so I have to catch up a lot. I wish I could just have gone to school as normal.

‘It makes me feel left out, because I can’t see my friends either. They aren’t accepting me for my religion and that’s wrong.

‘I feel confused and annoyed that I can’t wear what I want for my religion. I hope they’ll change their rules so that girls like me wear skirts to school.’

Idris, an athletics coach, added: ‘My daughter is being denied an education because of her religious beliefs.

‘All Siham wants to do is to wear a skirt which is a few centimetres longer than her classmates – and I don’t know why the school has such a problem with this.

‘She is sent home to change into a shorter skirt then return to school later that day – but she isn’t going to change her beliefs in an hour.

‘The school is threatening to take legal action against me, but I’m not forcing her to wear a longer skirt – it’s her faith and her decision to make.

‘She used to love school, but now she goes to school crying because of this – it’s heartbreaking.’ 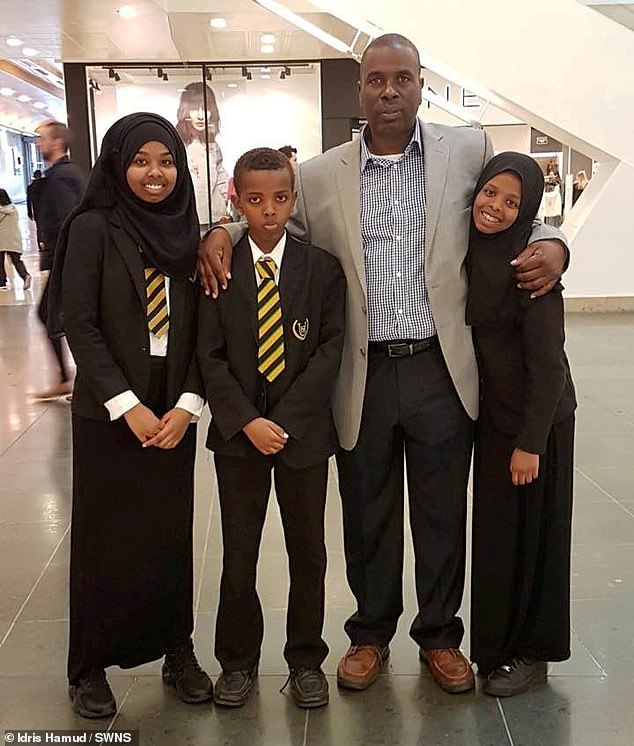 Her father Idris Hamud, 55, (pictured with his three children) said they follow a traditional branch of Islam which believes women should only wear long skirts

The family said they have recently discovered a new school uniform rule about skirts was introduced two years ago, stating shorter school-branded skirts had to be worn. 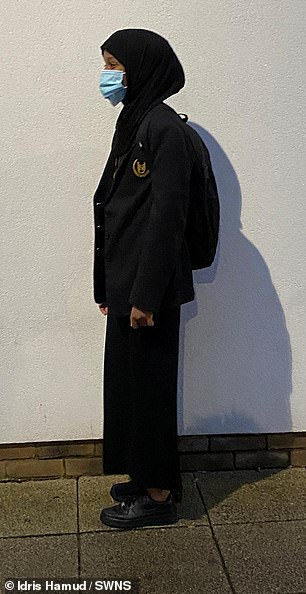 The school sent her parents a letter threatening legal action against them for their daughters alleged unauthorised absences on December 9 after she was repeatedly sent home for wearing the incorrect uniform, her parents claim

But the family claim they didn’t know – and Siham continued wearing her longer skirt, unaware she was breaking any rules, until she was pulled up on December 1.

She was sent home to change – but didn’t return to school – and the same thing happened each day for the three weeks of term in December, her family said.

It comes despite older sisters Sumayyah, 19, and Ilham, 17, having both worn the longer skirts to school without issue.

Dad Idris said they follow a traditional branch of Islam, which means they ‘want to believe in their religion in a pure way’.

He says this means women should only wear long skirts.

The school sent her parents a letter threatening legal action against them for their daughters alleged unauthorised absences on December 9.

It said: ‘Siham’s absence is being recorded as unauthorised. Unauthorised absence may result in a fine being issued, or legal action being taken against the adults who have parental responsibility or day-to-day care of your child.

‘Legal action can be in the form of a penalty notice or a summons to the magistrates’ court. 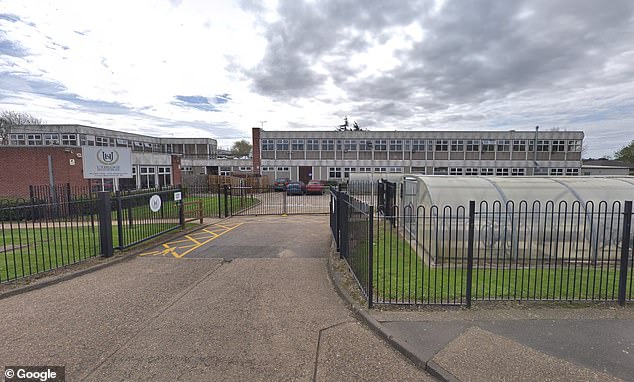 ‘I must ask that you support the school and your daughter by ensuring that she attends school in full school uniform with immediate effect.’

Idris added: ‘I don’t know why her skirt has suddenly become such an issue.

‘She’s always been a bright girl, one of the top in her class, and she loved school – and now they just keep sending her home.

‘Siham makes her own decisions about her religion, and I can’t make her wear clothes she doesn’t want to wear, so neither should the school.

‘She is being denied an education because of her religious beliefs, and I don’t know how anyone can get away with that.’

While Siham has been learning from home since the new term began, Idris expects the issue to return once face-to-face teaching resumes.

He said the issue is due to be discussed on a complaints panel with the school governors later this month.

The school states on their website: ‘Every lesson is important and school should not be missed unless it is completely unavoidable.

‘The school will report any unauthorised or continued absences to the participation team, who will then contact the parent to discuss the reasons for the absences.

‘Legal action and Fixed Penalty Notices (fines) are issued for students who do not attend school regularly.’

The school’s principal, Nigel Clemens, added: ‘This matter is currently subject to examination through the formal school complaints policy.

‘It would therefore not be appropriate to comment further at this time.’

Tags: Are, girl’s, Muslim, Parents
You may also like
Celebrities News

How Chrissy Teigen Damaged Her Teeth At The Inauguration