Mother-of-two, 56, died after waiting nearly an hour for ambulance as she screamed at 999 call handlers: ‘Help me, I’m dying, I can’t breathe’

A mother-of-two died after waiting ‘almost an hour’ for an ambulance to arrive, having been ‘struggling to breathe’ and was heard screaming ‘help me, I’m dying, I can’t breathe’ in 999 call recordings.

Bina Patel, 56, from Ashton-under-Lyne, in Tameside, Greater Manchester already had ‘no pulse’ by the time paramedics got to her home, said her son Ashkay.

She died from a ‘suspected cardiac arrest’, according to a patient report completed by North West Ambulance Service (NWAS).

Ashkay had called for an ambulance ‘seven times’ as her condition deteriorated, in the early hours of October 11, and sat with her as she took her final breaths.

The 27-year-old desperately tried to save her – and blames NWAS for her death. 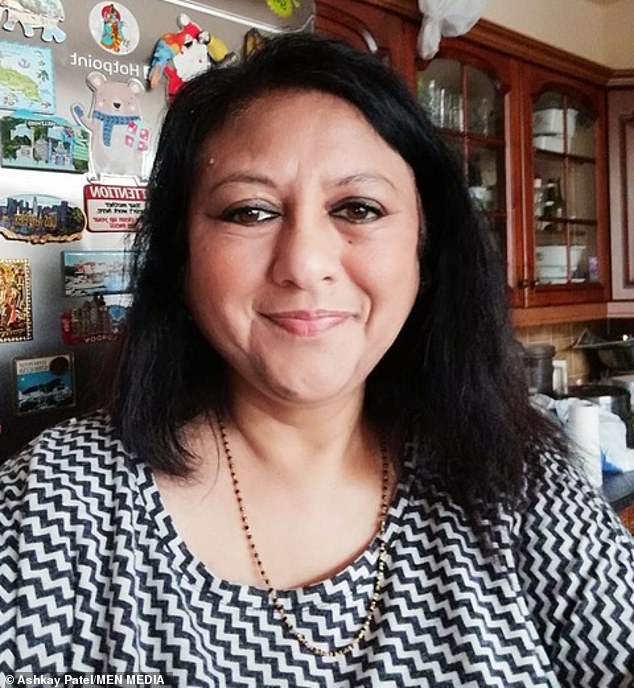 Mother-of-two Bina Patel (above) died after waiting ‘almost an hour’ for an ambulance to arrive, having been ‘struggling to breathe’ and was heard screaming ‘help me, I’m dying, I can’t breathe’ in 999 call recordings. The 56-year-old, from Ashton-under-Lyne, Greater Manchester already had ‘no pulse’ by the time paramedics got to her home, said her son Ashkay

In the weeks following the tragedy, he has demanded answers, saying ‘my mum suffocated for almost an hour’ and that her life ‘could have been saved’.

It comes as new figures revealed patients suffering heart attacks and strokes are waiting for more than an hour for an ambulance amid crippling NHS pressure.

Mrs Patel, who worked in the town’s Asda as a cashier for 15 years, had been out to meet friends in Leicester on October 10 before returning home and heading to bed. All seemed well and she was happy, said her son.

But in the early hours of the next morning, Ashkay woke to the sounds of her shouting for his help, frightened that she was struggling to breathe.

This came as a shock to Ashkay, who claims his mother had long-term diabetes but no unexpected, underlying conditions that would leave her short of breath.

The pair, who shared a home after the death of Ashkay’s father, tried to calm Mrs Patel’s breathing – but to no avail.

When her condition deteriorated, he claims he made his first of seven calls to 999, asking for an ambulance just after 2.30am.

The call handler told him an ambulance would be on its way and that he should attempt to keep the patient calm, said Ashkay. 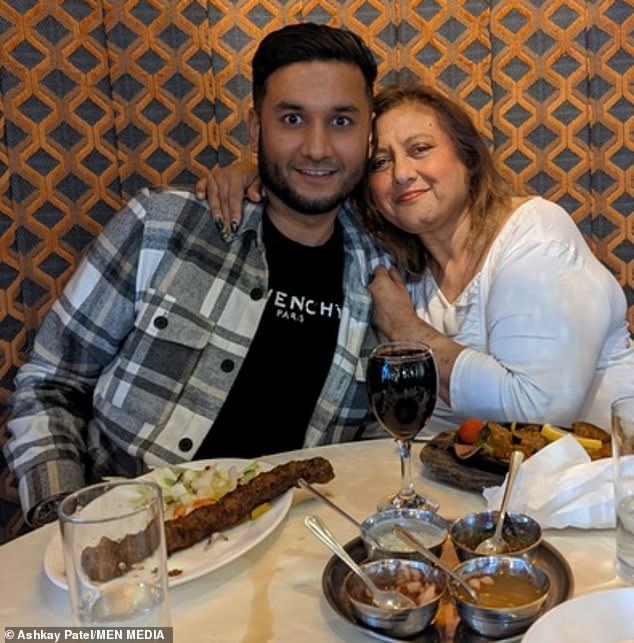 Mrs Patel died from a ‘suspected cardiac arrest’, according to a patient report completed by North West Ambulance Service (NWAS). Ashkay (above with his mother) had called for an ambulance ‘seven times’ as her condition deteriorated, in the early hours of October 11, and sat with her as she took her final breaths. The 27-year-old desperately tried to save her – and blames NWAS for her death

During the next 55 minutes, he said he called 999 again and again as no ambulance was arriving and his mother was becoming severely ill.

Mrs Patel’s distress could be heard in recordings of two of the 999 calls, which Ashkay requested from NWAS.

In the horrific calls, Mrs Patel can be heard screaming, saying on multiple occasions ‘help me, I’m going to die’, with the screaming being acknowledged by the call handler as Ashkay tries to help his mother.

NWAS provided recordings of the calls at 2.52am and 3.17am. During the call at 2.52, the call handler can be heard saying that the wait for an ambulance is an ‘hour and a half’ as ‘we’re very busy’.

In the second recording, from the call at 3.17am, Ashkay tells the emergency service that his mother has now stopped breathing entirely.

A call handler can be heard saying that there is ‘nothing’ Ashkay can do to help, and that he should wait for paramedics to arrive. The call handler then says they have ‘another call coming in and [they] have to hang up’.

Ashkay said an ambulance and paramedic car arrived at 3.27am, nearly an hour after his initial 999 call. By this point, he had been doing CPR as directed by the call handler to no effect and his mother was already dead, he claims.

A patient report completed by NWAS, again requested by Ashkay as he lodged a formal complaint against the service, and seen by Manchester Evening News (MEN), reads that an ambulance was mobile and on the way to the scene at 3.18am.

On the paramedics’ arrival, Mrs Patel was showing ‘no pulse, no respirations’ and had a ‘suspected cardiac arrest’, reads the report. Bina Patel was pronounced dead shortly after.

Ashkay said he has been left ‘scarred’ by the loss, and the terrifying circumstances in which it happened – exacerbated by the fact the family home is very close to Tameside Hospital A&E.

‘The level of care received on that evening was just atrocious,’ he told MEN.

‘Tameside Hospital is two minutes up the road from where we live. If I could have got her in the car and driven her up there myself, I would have. But she just couldn’t.

‘At about 2.10am, my mum was struggling to breathe. She shouted my name, I jumped out of bed and saw that she couldn’t even stand. 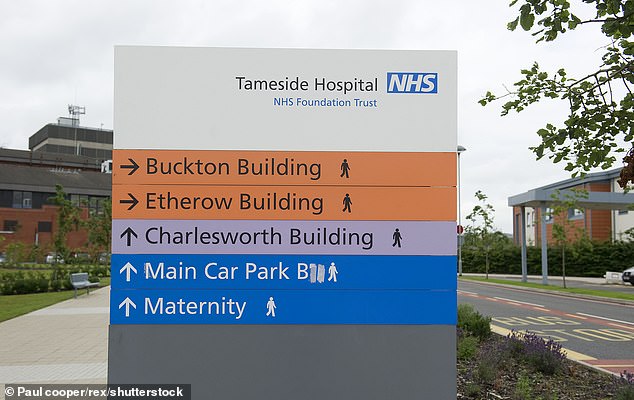 Ashkay said he has been left ‘scarred’ by the loss, and the terrifying circumstances in which it happened – exacerbated by the fact the family home is very close to Tameside Hospital A&E (file image)

‘She was wheezing, she looked dizzy. I sat her down, got her a glass of water and I called the ambulance at about 2.30am to tell them she was having breathing difficulties.

‘Knowing the hospital was so close, I expected someone to be there as soon as possible. No one arrived.

‘I called them seven times that evening. It got to the point where she collapsed on the floor. I rang 999 and, on my final 999 call at 3.23am, they were telling me how to give CPR to my mum.

‘At 3.27am, five minutes later, that’s when an ambulance and paramedic car arrived at the scene. They put adrenaline shots in her and put a machine on her and they did fight for her for a good 30 minutes. But it was too late by then, there was no pulse.

‘I was so angry at them. I told them “I rang you over an hour ago, that’s when you should have been here, when she was still alive and just struggling for breath”.

Ashkay said he will always look back on the night wondering if he could have done things differently.

He now wants answers to know why an ambulance was only able to be mobilised to his home at 3.17am, after he first called to report the breathing difficulties almost 50 minutes prior.

‘A life potentially could have been saved that night because she was struggling for breath for a full hour while waiting for the ambulance service,’ he said.

‘Throughout that whole hour, her lips went from red to white, things I thought I’d never witness in my life. Every time I made a call, they kept saying “calm the patient down”. How do you calm someone who is struggling to get breath?

‘An hour before, I was there, with my mum, trying to help her get her breath. An hour later, she’s lying in front of me, passed away.

‘I’m traumatised because there was no help from the people I needed it from. The service that you and I pay into. None of it makes sense to me. There’s unanswered questions, why was I let down?

‘For anyone it’s heartbreaking to see a parent die in front of you. That whole scenario is always going to be in the back of my mind, I’m never going to forget what I witnessed that night. Never in my life.

‘It’s just scarred me for life. Knowing the NHS wasn’t there when I needed it. I can’t trust the ambulance service at all. No one can believe the ambulance took that long. The first question the 999 call handler asks is “is the patient breathing?”.

‘She just suffocated for that whole hour. Imagine being underwater for a full hour. You’re not going to survive. That’s the position the ambulance [service] put her in.

‘If they came in time, something could have been done. The fact that I had to call 999 to get instructions on how to give CPR to my own mother, it’s sickening.

‘NWAS is the reason my mum died, in my opinion. They caused her death by not coming in time. I feel like they killed her, I blame them for her death. They didn’t do their jobs properly. I don’t think they took it seriously enough.’

NWAS is now making internal enquiries into the incident, said Ashkay, and has promised him a response within 60 days.

In response to MEN’s questions over the death of Bina Patel, a North West Ambulance Service spokesperson said: ‘We wish to pass on our deepest sympathies to Mr Patel and his family for the loss of his mother.

‘We can confirm we have received an official complaint, and the investigation is ongoing. We are in contact with the family and will update them with our findings.’

Ashkay and his brother hope to raise money in her memory for their local temple and the British Heart Foundation.

‘Bina Patel was so well known in the community,’ said Ashkay. ‘She was the most loving and caring person you could ever come across. Any help and guidance you ever needed, she was there.

‘Even now people are coming to my house talking about the happy times they had with her, I had with her. My mum did the best she could, throughout her entire life. She was so proud of my brother and I and what we’ve achieved.

‘She made Indian feasts for the local homeless shelter. Her speciality was cooking. No one is going to cook that feast anymore.

‘She was an amazing person who could connect with anyone in the world. You’ll never find a character like her. My mum was spectacular.’

He added: ‘I’m so angry that if I saw an ambulance with blue lights on, I don’t even think I’d move out of the way for it. When I needed them the most, they weren’t there for me.

‘My mum was only 56. My mind will never settle until I know why I was let down that night. It took the ambulance 57 minutes to get here, and I live two minutes from a hospital.’

Tags: ‘Waiting, 56, after, died, mother
You may also like
Celebrities News