A missing Hawaiian 6-year-old girl, whose adoptive parents were charged with her murder last week, had stopped breathing after being duct taped and held in a dog cage inside the family’s  bathroom in August, one of her sisters told investigators.

Arrest affidavits for Lehua Kalua, 43, and husband Isaac “Sonny” Kalua, 52, filed Friday reveal harrowing new details leading up to the disappearance of their adoptive daughter, Isabella “Ariel” Kalua. The couple reported the girl had gone missing from her bedroom Sept. 13, prompting a massive community-wide search. Now investigators believe she was killed nearly a month before.

The girl’s body has not been found, and the Honolulu Police Department and FBI investigators were searching the couple’s home and the Pearl Harbor Naval Ship Yard, where Isaac works, last week.

Surveillance video obtained from the Kalua’s home on Puha Street in Waimanalo shows Ariel alive on Aug. 18, according to the affidavits. One of Ariel’s biological sisters, identified in court documents only as I.M.K., who is 11 or 12 years old, told investigators Lehua and Isaac asked her to keep a secret about what happened to her missing 6-year-old sibling two months ago. 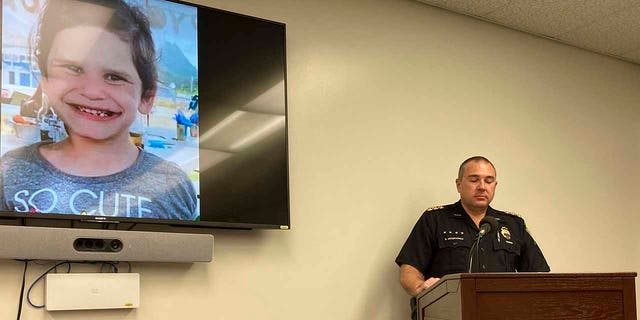 Honolulu Police Maj. Ben Moszkowicz addresses a news conference in Honolulu Wednesday, Nov. 10, 2021, where officers said they had arrested the adoptive parents of Isabella "Ariel" Kalua, shown on the screen to the left. The parents, Lehua and Isaac "Sonny" Kalua, have been charged with second-degree murder in the girl’s death. Police say the girl was killed a month before they reported her missing Sept. 13, 2021.
(AP Photo/Jennifer Sinco Kelleher)

In a recorded interview conducted Nov. 5 by Det. Shayne Iwamoto, the sister said she knows Ariel is dead “because she was there.” According to the girl’s account, Lehua had woken her up around 3:30 a.m. one morning, and they both went to check on Ariel in the bathroom. The sister observed that Ariel “did not wake up” and had “duct tape on her nose and mouth and was not breathing” inside a dog cage.

Lehua then filled the bathtub with water and put Ariel inside to see if she would wake up, but “it did not work,” the affidavit says. The sister then had to help carry Ariel to a bedroom. She did not see what happened to Ariel because she was told to go back to bed as Lehua and Isaac stayed up.

Lehua then drained the tub. A few days later, the sister said, Isaac went to a hospital to “pretend” he had COVID-19. The girl stated she knew Isaac was pretending because she knows that he took off work to “help mom,” the affidavit says, “to get rid of the stuff … evidence.”

The affidavit says Isaac told investigators he went to work Aug. 19, was scheduled to be off on Aug. 20 and woke up feeling ill Aug. 20. He went to an emergency room, where he was treated for possible COVID-19 symptoms. He said he took off work for the next two weeks because of the hospital visit.

The family did not own a dog at the time, and Lehua had purchased the dog cage online because Ariel “would sneak around at night and want to eat because she was hungry,” the affidavit says. The sister said she would sometimes sneak Ariel food because Lehua would not feed her. But Lehua “would catch them and become upset,” so the adoptive mother started keeping Ariel inside the cage at night.

The affidavit says Officer Joel Patterson first responded at about 6:25 a.m. on Sept. 13 to the home on Puha Street in Waimanalo, where he was greeted by Lehua, who identified herself as the girls’ adoptive mother. Lehua told the officer that she hadn’t seen her daughter since about 9 p.m. the night before when putting the girl to bed.

Lehua claimed to have woken the next day to notice the side door of the house was open. In the past, Lehua said, her daughter sometimes would go to the garage unnoticed and fall asleep there. The woman also claimed the girl was known to open windows and leave doors unlocked and said the door sensor was activated at about 1:30 a.m. Lehua said the family had a camera system installed but it constantly crashes and goes on and off.

The affidavit identifies the missing girl’s biological parents as Melanie Joseph and Adam Sellers, who are homeless and live in the Waimanalo. Investigators located Joseph on Sept. 13, and she claimed to have no knowledge of the girl’s whereabouts. Sellers, meanwhile, was living at a residential treatment facility at the time.

The Kaluas had adopted three of Joseph and Sellers’ biological children, including Ariel, and were foster parents to a fourth child of the same couple born in 2020.

The adoptive parents were arrested Wednesday and are being held without bail. The Kaluas appeared Friday before Family Court Judge Linda Martell at Honolulu District Court via video conference from a courthouse cell block, the Honolulu Star Advertiser reported. State Public Defender James Tabe entered not guilty pleas for them. He said if they both qualify for public defenders, one of them will have a private attorney appointed.

An attorney who has acted as the Kalua’s spokesperson, William Harrison, told The Associated Press he is not representing them in the case but has spoken on their behalf as a family friend.

“All I can say is I’m obviously saddened by what’s written,” he said of the court filing. “I don’t know the details.”

During a news conference announcing the arrests of the Kaluas, police declined comment on why they believed Isabella is dead. The timing of the sister’s interview last Friday with the detective coincides with Honolulu Police homicide Lt. Deena Thoemmes saying the case turned into a murder investigation at the end of last week.

Tags: 6, girl, Hawaiian, Missing, was
You may also like
Celebrities News