In her first public appearance since resigning under pressure from Premier Daniel Andrews last year, Ms Mikakos reaffirmed her discontent that department officials did not inform her of emerging issues with contact tracing and quarantine hotel protocols during the state’s second wave of COVID-19 infections last year. 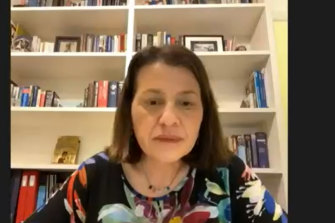 Former health minister Jenny Mikakos speaking at an inquiry into the closure of I Cook Foods. Credit: Victorian Parliament

She stepped down as minister, and quit State Parliament, in September after Premier Daniel Andrews told the Coate inquiry into Victoria’s troubled hotel quarantine system he believed Ms Mikakos was accountable for the program. She resigned a day later and issued a statement disagreeing with the Premier’s evidence and expressing disappointment at her departmental officials.

Speaking at a parliamentary inquiry on Thursday into the forced closure of a catering business, Ms Mikakos talked broadly about departmental issues and veered into the topic of the state government’s pandemic response.

Asked whether she had confidence in Professor Sutton, she referred to her resignation statement and said there were “clearly matters that my departmental officials should have briefed me on”.

“Clearly when I was referring to officials … I also had Dr Sutton in mind,” she said. “There were clearly circumstances where I felt very frustrated and disappointed.”

Leaks from two Victorian quarantine hotels led to thousands of COVID-19 cases that overwhelmed a paper-based contact tracing system and eventually led to more than 800 deaths. Since then, Victoria’s contact tracing has been vastly improved and hotel leaks have caused dozens of outbreaks in other capital cities. 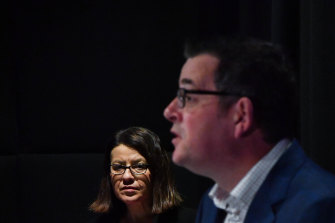 Ms Mikakos, who served as a Labor MP for more than two decades, backed calls for a federal royal commission to examine the policies implemented to respond to the coronavirus pandemic. Several federal Labor MPs as well as the state Liberal Party and former Liberal premier Jeff Kennett also support the idea.

She suggested there would come a time when she could speak frankly about the Andrews government’s response to the pandemic.

“I’m committed to the people of Victoria knowing the truth in all matters and I believe there will come a time when that may be able to occur, whether that be in a court of law or potentially a federal royal commission,” she said, adding that a royal commission could investigate the vaccine rollout and hospital preparedness.

“There is a need for a thorough examination of the entire pandemic response, by state governments, by federal governments. These pandemics will keep occurring.”

Ms Mikakos said last year after her resignation that her quitting should not be understood as an “admission of responsibility” for the quarantine program and that accountability was shared with Jobs Minister Martin Pakula.

In her final submission to the Coate inquiry, she argued Mr Andrews’ decision to “subvert” the usual cabinet processes may have contributed to the errors made and claimed it was “nonsense” for her alone to be held responsible.

The final report of the inquiry found the Health Department overseen by Ms Mikakos failed to accept its role as lead department for the running of the program. It also stated the lack of briefings to Ms Mikakos and Mr Pakula was “at odds with any normal application of the principles of the Westminster system of responsible government”.

The body which oversees Victoria’s government departments, the Victorian Public Sector Commissioner, is reviewing lines of accountability between ministers and department secretaries to determine if Victoria’s system of government is functioning effectively. The government has committed to adopting any recommendations, which are due in the second half of this year.

Tags: Calls, for, Mikakos, pandemic, Roy
You may also like
Celebrities News