Miami Beach city officials are cracking down on crime and law-breaking revelers – namely in the area’s entertainment district – after a tourist was shot and killed in broad daylight at an outdoor restaurant while protecting his 1-year-old son.

Miami’s South Beach is often known for its party crowd and vivacious culture, but the area’s entertainment district has recently made headlines for far less savory reasons: crime and violence. Amid a spurt of high-profile crimes, most recently the shooting death of 21-year-old Dustin Wakefield on the evening of Aug. 24, the city’s exasperated mayor told the public: “We cannot accept this as our normal.”

“Our city arrests more people per capita than nearly any of the other 34 cities in Miami-Dade County.”

“This little area, what we have called an entertainment district, has become an incredible magnet to crime and disorder. And whatever it provides in revenue, it’s just not worth the heartache,” Miami Beach Mayor Dan Gelber said in a video message late last week.

He added: “Despite the volume of arrests and code violations. People are still coming to buy drugs to fight and, too often, carrying guns.”

After the shooting, Tamarius Blair Davis, 22, of Norcross, Georgia, told investigators he shot Wakefield on because he “was high on mushrooms, which made him feel empowered,” according to his arrest report.

Davis allegedly told police he approached the patio area of the La Cerveceria restaurant just before 6:30 p.m. and randomly decided to shoot Wakefield, who was on vacation from Castle Rock, Colorado. In a short video taken immediately after the shooting and obtained by local affiliate WSVN-TV, the gunman can be seen dancing while people are heard screaming. The gunman then walks up some steps, the weapon in his hand.

Davis fled the restaurant, police said, and was captured in a nearby alley. Cellphone video obtained by the Miami Herald shows Davis lying spread-eagle on his back and smiling as three officers approach with their guns pointed towards him yelling commands, warning him that if he touches his gun he will be shot. 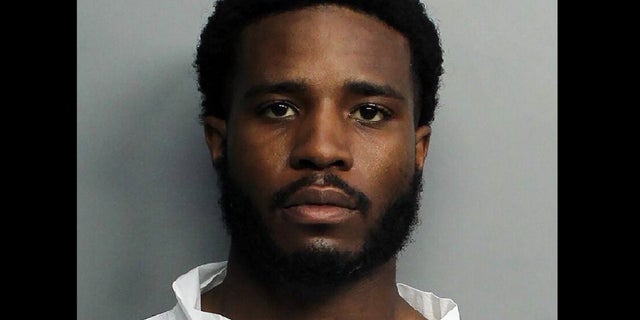 He was ultimately charged with murder. Mike Wakefield, the victim’s uncle, told the Herald that Dustin Wakefield died protecting his young son.

After speaking about the circumstances of Wakefield’s death, Gelber said Friday that several other instances of violence often go unnoticed.

“Most people don’t really even hear about the incidents that happen at other times, like the stabbing earlier this week at around midnight, or the shootings that are too common in this area in the early morning hours,” he continued.

The entertainment district spans from Collins and Ocean drives and Fifth to 15th streets. 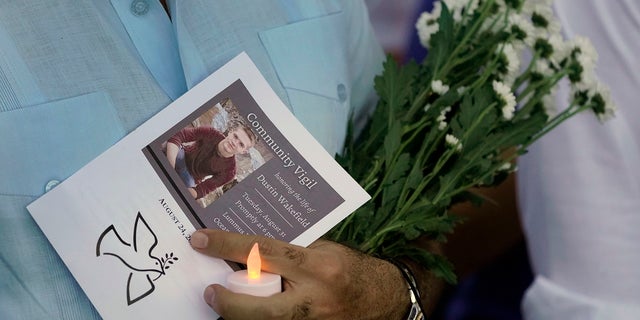 An attendee at a community vigil honoring the life of Dustin Wakefield, holds a program, flowers and a battery-powered candle, Tuesday, Aug. 31, 2021, in Miami Beach, Fla. Wakefield, 21, was shot and killed last week by gunman who walked into a Miami Beach restaurant and fatally shot Wakefield who was vacationing from Castle Rock, Colo. (AP Photo/Wilfredo Lee)
(AP Photo/Wilfredo Lee)

As of Friday, law enforcement had arrested 3,154 people year-to-date in South Beach – 1,593 of whom were nabbed in the entertainment district, Gelber said. Authorities have also taken 457 illegal guns off the streets of South Beach so far this year.

“To put this in comparison, our city arrests more people per capita than nearly any of the other 34 cities in Miami-Dade County,” Gelber said.

In a related memo on Friday, Miami Beach City Manager Alina Hudak announced plans to “create the highest level of regular police presence this area has ever seen.”

She said: “The many years of troubling incidents in this district can no longer be tolerated.” 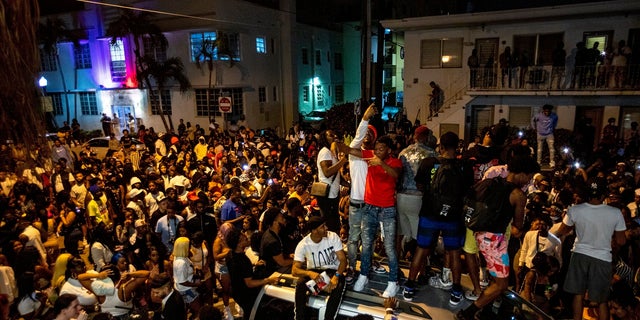 In her plans, Hudak announced that Gelber had ordered police, along with fire rescue, parking, sanitation and other departments to devise a unified strategy to deal with the crowds.

The police department reassigned an average of 40 officers to patrol South Beach streets, to increase “visibility” not just on nights and weekends, but throughout the day, the memo stated. Gelber said 10 officers from the county are being added every weekend to South Beach duty for the rest of the year.

The beach-front party scene has been plagued with increasingly out-of-control partiers during holiday weekends. They city enacted a strict 8 p.m. curfew in March after unruly spring break crowds gathered in the streets by the thousands, erupting into fights, destroying restaurant property and refusing to wear masks. Over 1,000 were arrested and many were from out of town, police said.

“It is no longer sufficient to treat what has historically been defined as ‘high-impact periods’ as anomalies when every weekend brings significant crowds and challenges,” Hudak said.

Additional code officers and park rangers will be assigned to enforce ordinance violations to create a “visible and constant deterrent” to overcrowding and other problems.

Hudak wrote in the memo that the parties created a “year-round threat to public safety from visitors who have demonstrated a blatant disregard for human life, public property and the well-being of our many law-abiding residents and guests.”