South Beach’s sizzling party scene is about to undergo a massive boost in police presence and tougher crackdowns on raucous crowds and crime, weeks after a tourist eating dinner with his family was fatally shot at a Miami Beach restaurant, authorities say.

“The many years of troubling incidents in this district can no longer be tolerated,” City Manager Alina Hudak said in a memo Friday disclosing plans to “create the highest level of regular police presence this area has ever seen.”

Miami Beach Mayor Dan Gelber ordered police, along with fire rescue, parking, sanitation and other departments to devise a unified strategy to deal with the crowds. The police department reassigned an average of 40 officers to patrol South Beach streets, to increase “visibility” not just on nights and weekends, but throughout the day, the memo stated. 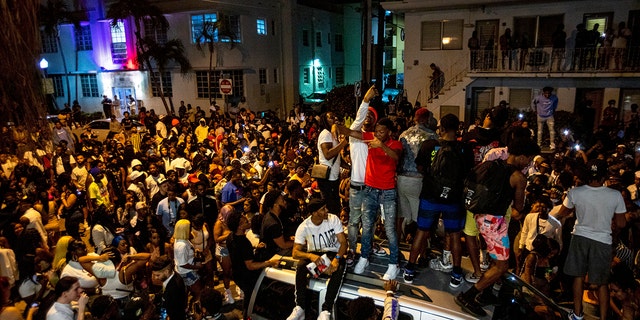 In this March 21,file photo, crowds defiantly gather in the street while a speaker blasts music an hour past curfew in Miami Beach, Fla.
(Daniel A. Varela/Miami Herald via AP, File)

Ten officers from the county are being added every weekend to South Beach duty for the rest of the year, Gelber said in a video message Friday.

The beach-front party scene has been plagued with increasingly out-of-control partiers during holiday weekends. The city enacted a strict 8 p.m. curfew in March after unruly spring break crowds gathered in the streets by the thousands, erupting into fights, destroying restaurant property and refusing to wear masks. Over 1,000 were arrested and many were from out of town, police said.

“It is no longer sufficient to treat what has historically been defined as “high impact periods” as anomalies when every weekend brings significant crowds and challenges,” Hudak said.

Additional code officers and park rangers will be assigned to enforce ordinance violations to create a “visible and constant deterrent” to overcrowding and other problems. Hudak stressed in the memo that the parties created a “year-round threat to public safety from visitors who have demonstrated a blatant disregard for human life, public property and the well-being of our many law-abiding residents and guests.”

Gelber said more than half of the nearly 1,600 arrests in 2021 came from the entertainment district, where speeding, fights and gun violence have become commonplace. The city seized more than 500 guns this year and now has 870 surveillance cameras operational.

“Every few days, I call a police officer who has been injured in the line of duty,” the mayor said. “Few cities face these challenges or ask as much of police.”

The crackdown comes less than two weeks after a fatal tourist attack, when police said a gunman shot a 21-year-old father eating dinner with his family as the man protected his 1-year-old son.

Twenty-two year-old Tamarius Davis told investigators he shot Dustin Wakefield last month because he “was high on mushrooms, which made him feel empowered,” according to an arrest report.

Since then, terrified residents have urged the mayor to take action. The mayor noted that Wakefield’s killing happened at 6:30 p.m. on a Tuesday, but he said the world didn’t hear about a stabbing earlier this week or the frequent early morning shootings.

“We cannot, we cannot accept this as our normal,” Gelber said.

He warned that the new stepped-up police presence was not sustainable, and said the party district needs to be rezoned with fewer bars and clubs and more residential and office buildings.

“What we have called an entertainment district has become an incredible magnet for crime and disorder and whatever it provides in revenue is just not worth the heartache,” the mayor said.