Married detective sergeant, 30, avoids jail after filming naked woman in shower on his iPhone and making ‘wholly absurd’ claim that he was only looking for his razor

A married detective sergeant has avoided jail after filming a naked woman in the shower on his phone and making the ‘wholly absurd’ claim that he was just looking for his razor.

Det Sgt Benjamin McNish, 30, held his mobile phone above the glass panel to record his victim as she undressed and washed on February 18, 2019, at a small flat in north London.

As soon as she spotted the phone, McNish pulled it away, then pointed it at her again, Southwark Crown Court heard.

The woman grabbed her towel, ran into the corridor and found startled McNish looking ‘like a rabbit caught in the headlights.’

But the officer, who worked in the Sapphire Unit dealing with investigations into sexual offences, insisted to jurors he was trying to find his blue razor. 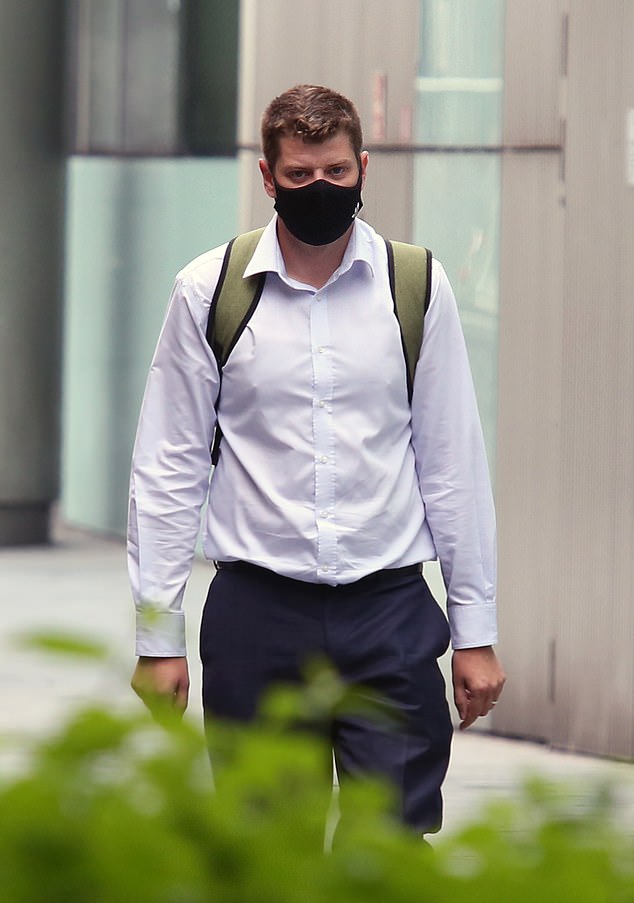 Det Sgt Benjamin McNish (pictured at Southwark Crown Court), 30, held his mobile phone above the glass panel to record his victim as she undressed and washed on February 18, 2019, at a small flat in north London

McNish was convicted of voyeurism at Southwark Crown Court after a four day trial last month.

Judge Jeffrey Pegden, QC, said McNish was a ‘pretty experienced detective sergeant’ at the time of the offence.

‘You most certainly abused the duty of trust you had to her for the purposes of your own sexual gratification.

‘I am further satisfied that your actions had a profound effect on her, causing her extreme anxiety, distress and alarm.

‘She was deeply shocked, upset and angered and it is plain she will never forget these events.

‘She remains feeling violated and angry that a police officer could behave like that when there are so many good police officers doing good work.

‘At trial, you advanced what may be described as a wholly absurd defence.

‘Mainly that you were using your phone as a sort of periscope so that you could see your razor.

‘Your account was unanimously rejected by the jury, perfectly understandably so.’ 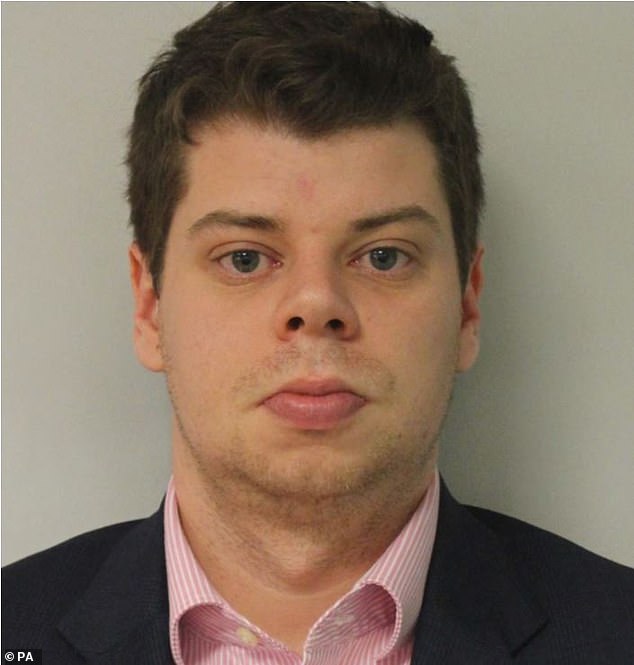 As soon as she spotted the phone, McNish (pictured) pulled it away, then pointed it at her again, Southwark Crown Court heard

McNish was staying with the woman and one of his senior colleagues, Chief Inspector Garry Smith, at a small flat in north London, at the time of the offence.

The night before, McNish brought up showering arrangements for the next day and offered to use the bathroom before the woman.

The following morning the woman heard the shower in use and waited for her turn.

When she entered the shower and took off her pyjamas she looked up and spotted a phone poking above the glass panel, the court heard.

Giving evidence from behind a screen the woman broke down in tears as she told the court: ‘I was confused, I was shocked. I was quite indignant that somebody would invade my privacy.’

William Eaglestone, prosecuting, told jurors: ‘She did a double take and then the phone went away and then she saw it again.

‘She grabbed her towel and ran into the corridor and found Mr McNish.’

Jurors heard McNish waved his arms up and down and told the woman to ‘calm down’ to not wake up his senior colleague.

Mr Eaglestone continued: ‘She said ”are you f***** taking photos of me?” He said, ”yes I did but I’ve deleted them” or words to that effect.’

After hearing the commotion Chief Inspector Smith ran into the corridor and saw McNish gripping a phone.

Inspector Smith told jurors he heard McNish say he had taken pictures but quickly erased them.

McNish was arrested for voyeurism on the spot and interviewed at the police station.

Giving evidence McNish told the court he accidentally photographed the woman as he looked for his razor. ‘The phone was up and I was trying to get the right angle..I was trying to see the razor.’

McNish said the door suddenly flung open, knocking his arm sidewards and causing him to take a blurred picture of the wooden door.

‘I knew exactly how this would look, being stood there outside the bathroom with my phone in my hand. I felt panicked.’

McNish also claimed he had dyspraxia and for that reason had acted ‘impulsively.’

The court heard McNish was ‘doing quite well in his career’ after working on child safety investigations.

He has also worked in the Sapphire Unit dealing with investigations into sexual offences.

McNish, of Benfleet, Essex, denied but was convicted of one count of voyeurism.

He was sentenced to 20 weeks jail suspended for two years and will take part in the Horizon programme for medium risk sex offenders.

Andrew Levin, from the CPS, said: ‘Benjamin McNish was a serving policeman who observed a woman showering without her consent for his own sexual gratification.

‘This was a private act that McNish had no right to observe. He violated the victim’s privacy by spying on her in a bathroom. His actions were clearly illegal and wholly unacceptable.

‘During the trial McNish claimed that he had just been using his phone to look for his razor by the sink, but the prosecution was able to prove to the jury that this was an absurd lie.

‘The CPS will always aim to prosecute those who commit criminal acts, regardless of who they are, where there is the evidence to do so.’