Nearly two months after Officer Darian Jarrott was gunned down during a traffic stop, his widow is demanding answers. &nbsp;

The man who was seen on video gunning down a New Mexico State Police Officer before being fatally wounded during a police chase with responding officers allegedly had a “violent criminal history,” including drug trafficking charges, from out-of-state offenses, according to reports.

New Mexico State Police officials recently revealed that Officer Darian Jarrott was apparently caught by surprise when Omar Felix Cueva opened fire during a highway traffic stop. Cueva, 39, had agreed to at the time to temporarily surrender a rifle when, instead, he opened fire, officials said late last week.

Cueva fired at least once at Jarrott across the pickup truck’s bed and then fatally shot Jarrott after he ducked and fell, according to an agency statement and video excerpts released Friday.

“Cueva fired several more rounds at Officer Jarrott who was struck by gunfire and killed,” the statement said. “As Cueva ran toward the front of the truck on the passenger’s side, he shot Officer Jarrott point-blank in the back of the head.”

WARNING: THIS VIDEO CONTAINS GRAPHIC CONTENT AND LANGUAGE THAT SOME MAY FIND DISTURBING

Authorities previously said Cueva fatally shot Jarrott after being pulled over on eastbound Interstate 10 between Deming and Las Cruces and that Cueva later died in a shootout with other officers following a pursuit.

On Monday, Jarrott’s wife, Gabriella Jarrott filed a tort claim notice with the state seeking damages, one of the first steps in filing a wrongful death lawsuit, the Albuquerque Journal reported.

Jarrott alleged that her husband was told to conduct a dangerous traffic stop without backup and was not informed of the details of the investigation, which led to his death.

New Mexico State Police Chief Robert Thornton told reporters that Cueva was on his way to Las Cruces to do a drug deal. 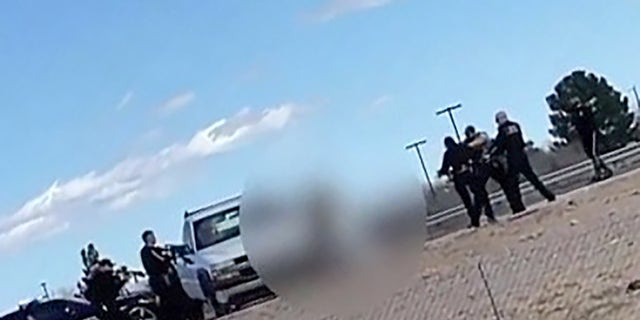 The Associated Press cited Thorton in describing how Cueva had a “violent criminal history,” that included drug trafficking charges from outside New Mexico.

According to KFOX14, Cueva’s criminal history included at least nine charges filed in California dating as far back as 1994 and as recent as 2010.

Spokespersons from the New Mexico Department of Public Safety and New Mexico State Police did not respond to Fox News’ requests for information on Wednesday morning.

Cueva was charged with vandalism in June 1994 and with possession of a controlled substance in September 2001 and October 2002, according to the report.

In April 2004, he was charged with importation of cocaine; in August 2006, he was hit with charges of burglary, fictitious check and false check; and in March 2007 he allegedly committed a probation violation, KFOX14 reported.

Jarrott, who joined the State Police in 2015 after previously working as state transportation inspector and local law enforcement officer, was from the small community of Lordsburg and was stationed in Deming.

Thornton said the officer had a reputation for always having a smile on his face.

“Even when there was a situation that was tough, the guy was always smiling,” Thornton said.

Tags: killed, Man, Mexico, new, Poli, who
You may also like
Celebrities News