A man has been arrested following a reported six-kilometre drag race along the Monash Freeway which culminated in a man rolling his car and being left with life-threatening injuries.

Police say two vehicles were seen travelling towards the city along the freeway and appeared to be racing; weaving and changing lanes, when the crash occurred at 10.45pm in Mulgrave. 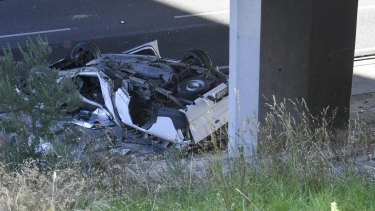 A man is in a critical condition in hospital after crashing this ute on the Monash Freeway at Springvale Road, Notting Hill. Credit:Penny Stephens

A 20-year-old Dandenong man driving a white Ford ute lost control before crashing into the Springvale Road overpass and rolling.

He was trapped for some time before he was extricated from the vehicle, a Victoria Police spokeswoman said. The man remains in a critical condition with upper-body injuries at the Alfred Hospital.

The other vehicle, believed to be a white Camry sedan, was seen allegedly speeding alongside the Ford ute between Wellington and Springvale roads and the driver allegedly fled the scene following the crash.

Investigators have now arrested a 20-year-old Narre Warren South man who is assisting police with their inquiries.

No one has been charged in relation to the incident.

A vehicle has been located and seized as part of the investigation.

The 18-year-old passenger in the ute, also from Dandenong, was conveyed to hospital with non-life-threatening injuries.

Detective Senior Sergeant Gerard Clanchy said officers were investigating whether the vehicles were driving in a reckless manner before the crash.

"It appears that the driver of the Ford [ute] was travelling at excessive speed when he has lost control, rolled his vehicle and collided with a concrete pillar of the overpass," he said.

Inbound lanes on the Monash Freeway remained closed between Springvale Road and Ferntree Gully Road until about 10.30am on Tuesday morning.

Detectives are appealing for any witnesses or motorists with information or dashcam vision of the cars racing prior to the collision near the EastLink overpass to come forward.

Anyone with information is urged to call Crime Stoppers on 1800 333 000 or can submit a confidential report at www.crimestoppersvic.com.au

Catch all the day’s headlines

At the end of each day, we’ll send you the most important breaking news headlines, evening entertainment ideas and a long read to enjoy.  Sign up here.

Tags: after, arrested, FREE:, Man, Monash
You may also like
Celebrities News