Police and probation service were warned in 2011 that Joseph McCann posed risk of sexual offending before he was freed from jail and went on UK rape rampage, damning report reveals

Eight years of warnings that Britain’s worst sex offender Joseph McCann should be kept in prison were ignored before his 37-rape rampage including on a 11-year-old boy, it was revealed today.

Probation staff first expressed concern about the danger of letting McCann back on the streets in 2011, a damning Ministry of Justice report published this afternoon has said.

And between 2017 and his release from prison in error in February 2019 there were eight occasions where keeping him in jail was considered but dismissed, a Government investigation has found.

Eight weeks after he was freed without a parole board hearing he launched a two-week rape-and-kidnap rampage where he abducted, raped and assaulted 11 victims aged between 11 and 71 in Watford, and the North West in April last year.

There was a ‘repeated failure’ by probation officers to recall the serial rapist despite concerns being raised by other professionals, today’s Ministry of Justice report said.

McCann was handed 33 life sentences and jailed for a minimum term of 30 years in December last year – one of his victims told The Sun today: ‘This coward should not have even been walking the streets at the time these offences happened, but was only doing so as a result of an outrageous and avoidable failure in the justice system.’ 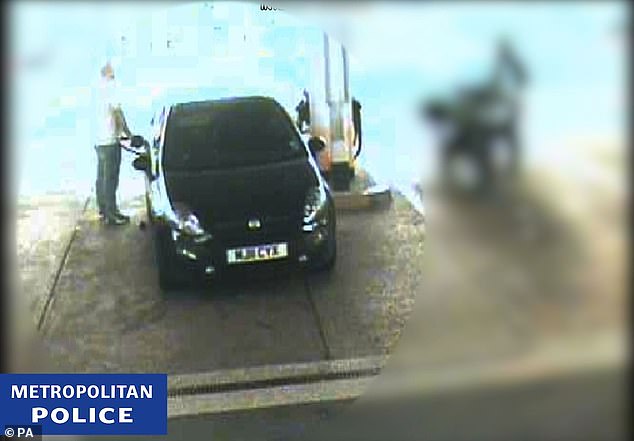 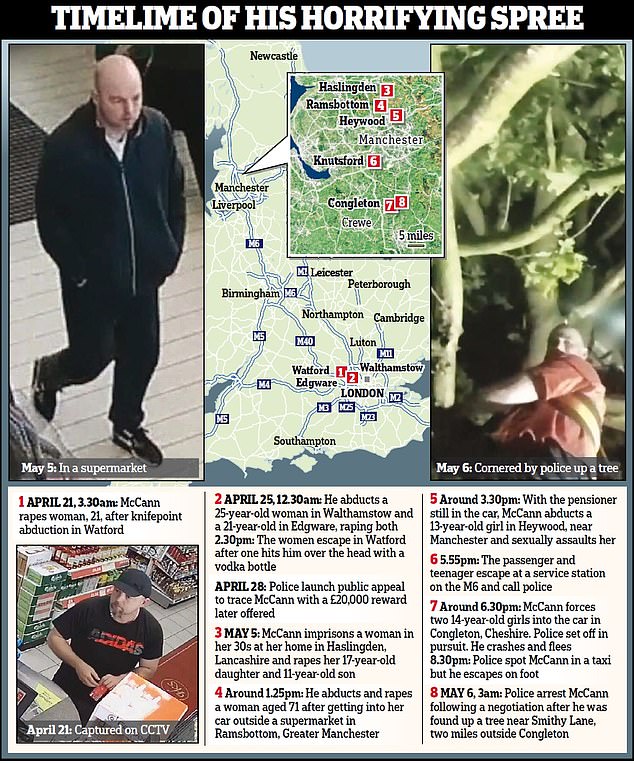 McCann had been freed despite being subject to an imprisonment for public protection (IPP) sentence for a burglary armed with a knife in 2008.

He was in and out of jail until he was released after serving half of his three-year prison sentence for burglary in February 2019 – without having to face a parole board hearing despite his IPP status.

He was seen by probation officers 10 times in two months after his release from prison before he went on his spree of sex attacks.

2008 – Joseph McCann threatened to stab an 85-year-old man in his home. He told the elderly man ‘give me money or I will knife you’ before taking his wallet and banking papers. He was jailed for an indeterminate term and told he cannot apply for parole for two and a half years.

Early 2017 – McCann is released on licence by the parole board.

Late 2017 – While on licence, he commits a burglary and is returned to prison on a three-year sentence.

February 2019 – McCann is wrongly released without having gone before the parole board. Instead, he is released automatically half way through his three-year jail term.

April and May 2019 – McCann goes on two-week rampage of rape, sexual assault and kidnap.

He had left prison in February 2019 and last saw a probation officer on April 19, three days before he committed his first rape.

A probation officer said McCann had attended the Watford probation office, where he was served with a warning for failing to disclose a new relationship under the terms of his licence because of his history of domestic violence.

McCann was ‘not happy’ about it and when his new fiancee’s parents found out about the condition, they broke off the relationship because they thought he was a sex offender.

The review found he should have been recalled to prison after he committed a burglary while on licence for an earlier offence.

Instead, he was handed a fixed prison sentence and released automatically halfway through, without Parole Board involvement, in February last year.

McCann had been given an indeterminate sentence for public protection (IPP) in 2008 after admitting breaking into and burgling the home of an 85-year-old man.

The terms of that sentence meant the Parole Board had to decide if it was safe to release him once his tariff expired.

Following his release on licence in 2017, McCann committed the second burglary and should have been recalled to prison.

But he was remanded into custody and then given a three-year determinate sentence, which did not take into account his earlier offending.

Today’s MoJ report said: ‘The most significant practice failure was the repeated failure to recall Joseph McCann or to reflect critically on earlier decisions not to recall him, in the face of both court and prison staff communicating their concern’.

Described by his sentencing judge as a ‘classic psychopath’, the 34-year-old convicted burglar had been freed after a probation service error two months before he embarked on the cocaine and vodka-fuelled rampage.

A review carried out by the Ministry of Justice (MoJ) and published on Thursday said: ‘From the point where McCann was arrested for burglary in 2017 to the point of his release, there were eight occasions where recall was considered or the recall decision was questioned.

‘These all represented opportunities to recall.

‘If the probation service had recalled McCann he would not have been released until the Parole Board was satisfied his release could be managed in the community.’

The findings have prompted the department to ask chief inspector of probation, Justin Russell, to carry out an independent review of the National Probation Service’s management of McCann and how the process of recalling offenders to prison is working.

Probation officers must be ‘more inquisitive’ instead of taking criminals who claim they’ve gone straight at ‘face value’, a report warned in January.

Her Majesty’s Inspectorate of Probation says too many staff are not investigating what is going on ‘behind the scenes’ when they meet offenders.

The warning follows the case of London Bridge attacker Usman Khan, who persuaded officials he was not a risk before stabbing two people to death in November. HMIP found repeated examples across England and Wales of probation officers failing to ask sufficiently thorough questions.

HM Chief Inspector of Probation Justin Russell also raised the prospect of an internal review into the case of Joseph McCann, who committed a string of sex attacks on women and children after being released from jail in error.

The probation service does not usually publish the results of such investigations, but Mr Russell said there was a ‘strong argument there is a public interest’ to do so in McCann’s case.

‘We need staff to demonstrate a more inquisitive approach rather than taking things on face value,’ a senior probation inspector warns in his report. ‘[Staff] should take a more proactive approach to investigate what’s going on behind the scenes.’