Joan Bakewell, 87, crowdfunds legal challenge against government’s decision to delay second Pfizer jab for up to a million pensioners to 12 weeks – despite evidence it should be 21 days 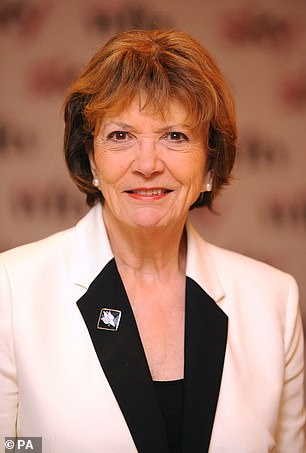 Broadcaster Joan Bakewell has launched a legal challenge to the Government’s controversial decision to give Britons a single dose of a Covid jab without a second one immediately lined up.

Officials in the UK decided last month to use all available doses of the Pfizer/BioNTech and Oxford/AstraZeneca jabs, to get a single dose to as many people as possible.

In the process they will leave people waiting up to 12 weeks for their second jab. The gap between jabs was initially meant to be only three weeks.

Pfizer warned last month there was ‘no data’ to show a single dose of its vaccine provided long-term protection, while the World Health Organisation refused to back the U-turn.

Announcing her legal challenge and a crowdfunding campaign, Dame Joan, 87, said her intention was to establish whether the decision to delay giving the second dose of the Pfizer jab is ‘lawful and safe’.

The presenter expressed her opposition to the decision to delay giving the second dose in an article for the Daily Mail last week.

She said she had initially been left ‘in limbo’ after being given an initial dose of the Pfizer vaccine but then ‘heard nothing’ from her GP after the policy U-turn. 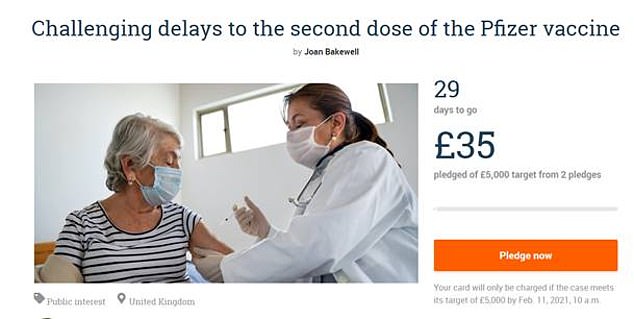 Dame Joan posted her crowdfunding campaign on website crowdjustice.com and said she was aiming to raise a minimum of £5,000

Last week it emerged that doctors would defy Government orders to give a second dose of the Pfizer jab to those elderly patients who were promised one when they got their first injections.

Dame Joan said that while she did not disagree with the idea of giving as many people as possible the first dose, so that they have some protection rather than none, she said ‘clarity’ was ‘desperately’ needed.

She added: ‘My sense of limbo is worsened because some doctors’ leaders have now spoken out, saying they believe that delaying the second jab is “grossly unfair” and “undermines the vaccine programme as a whole”.

Dame Joan posted her crowdfunding campaign on website crowdjustice.com and said she was aiming to raise a minimum of £5,000.

‘My intent is to establish whether the proposed delay to the administration of the second dose of Pfizer Vaccine is lawful and safe,’ she wrote. 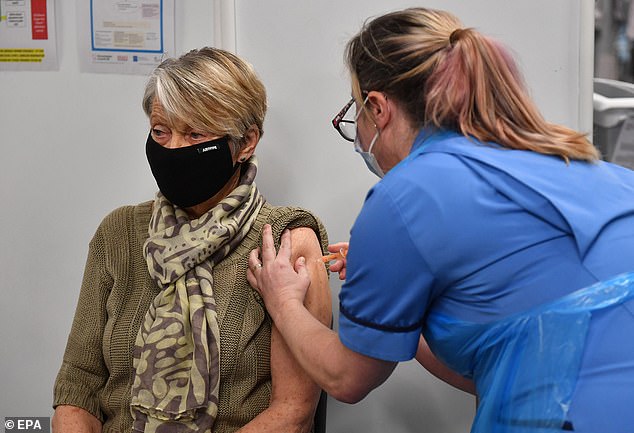 Officials in the UK decided last week to use all available doses of the Pfizer/BioNTech and Oxford/AstraZeneca jabs, to get a single dose to as many people as possible

She said her lawyers, from legal firm Leigh Day, had sent a letter to Health Secretary Matt Hancock on Friday last week asking him to explain the ‘basis for the decision’ by Tuesday, January 12.

Britain’s coronavirus vaccination strategy could increase the risk of yet another mutant strain of the virus evolving by giving it more time to mutate.

The Government last month unveiled its controversial policy which will see people given a single dose of a Covid jab without a second one lined up.

Both the vaccines approved so far – one made by Pfizer and the other by Oxford University – rely on two doses to be most effective, with them ideally spaced three weeks apart.

But in a scramble to stop the devastating second wave of Covid-19, Britain has abandoned this rule and decided it will extend the gap to 12 weeks so it can give more people a single dose as soon as possible.

The benefit will be that millions more people end up being vaccinated in the coming weeks. But it’s possible the vaccines won’t work as well in the long run.

Officials switched to this schedule because they want to vaccinate around 13million people by mid-February so that lockdowns can start to gradually be lifted.

And Professor Whitty said it may also raise the risk that an ‘escaped mutant’ version of the virus evolves to resist immunity produced by the jabs.

Dame Joan said the letter ‘outlines three potential grounds for a judicial review’ – where a judge would review the lawfulness of the decision.

She claimed the first reason to consider a judicial review was that the NHS’s letter telling doctors to delay giving the second dose ‘instructed health care professionals to act in a manner that appears to be contrary to the instructions for use that had been agreed between the MHRA and Pfizer.’

The second reason claimed it was ‘unlawful’ to depart from the Medicines and Healthcare Products Regulation Agency’s (MHRA) assessment, which approved the Pfizer vaccine for use on the basis the second dose would be given within 21 days.

In the third reason she gave, she said there had been a ‘breach of legitimate expectations’.

‘It was clear from published documents and publicly made statements that the second dose would be administered 21 days after the first dose,’ she said.

‘Patients consented to a course of medical treatment on that understanding.

‘The instruction contained in the NHS Letter breached these expectations and undermined their informed consent to the first dose.’

The Department of Health and Social Care has defended the decision to delay giving the second dose.

Its permanent secretary, Sir Chris Wormald, said: ‘We followed the advice of the JCVI (Joint Committee on Vaccination and Immunisation ) and the chief medical officers that the best public value in public health terms was to get the first dose to the maximum number of vulnerable people as quickly as possible.

‘As opposed to the alternative strategy of giving second doses to the same people.

It comes after the WHO last week said governments should be giving people their second dose within 21 to 28 days of having the first, to make sure the vaccine works long-term.

But it did not attack Britain’s decision to delay giving the second dose, admitting the Government had been forced to make a difficult decision because of spiralling infections and deaths in recent weeks.

Dr Alejandro Cravioto, chairman of WHO’s vaccination advisory group, said: ‘We deliberated and came out with the following recommendation: two doses of this vaccine within 21-28 days.’

His colleague Dr Kate O’Brien said the data being used to justify the 12-week regime being used in the UK was ‘imperfect’.

Although the WHO refused to give its approval to the UK’s 12-week plan, it also did not criticise it.

It said there was a need for flexibility, particularly in countries with bad outbreaks, and that it was up to governments to make their own decision on the balance of risks.

Dr Joachim Hombach said: ‘The [JCVI], the recommending body of the UK, has given more flexibility up to 12 weeks in consideration of the specific circumstances that the country is currently facing.

‘We feel that we need to be grounded in evidence in relation to our recommendations but totally acknowledge that countries may see needs to be even more flexible in terms of administration of the second dose. 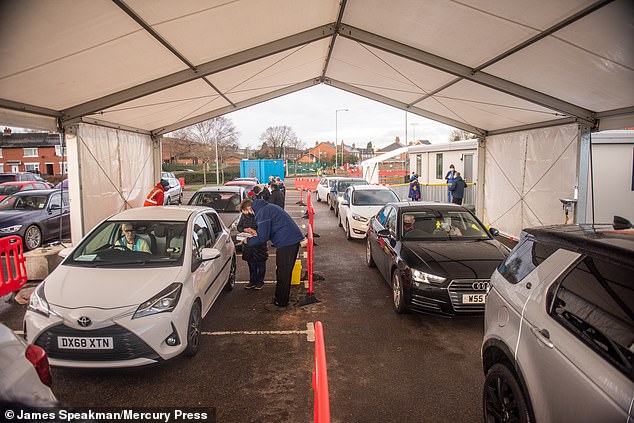 Cars are pictured queuing at a drive-in vaccination centre in Hyde, East Manchester

‘But it is important to note that there is very little empirical data from the trials that underpin this type of recommendation.’

On Monday night, ministers pledged that everyone over 50 would be offered a coronavirus jab by the end of April.

It means 32million Britons – six in ten adults – will need to be vaccinated in 16 weeks.

Two million jabs will be given every week in what called ‘the greatest logistical challenge of our time’.

Around 2.6million jabs have been given so far – with two fifths of the over-80s and quarter of elderly care home residents having had the vaccine.

By the end of January another 43 mass centres will open, each able to give out thousands of jabs a day.

Pharmacies, GP-led centres, and hospitals will also be involved.

In a meeting to discuss how doses are spaced out yesterday, WHO experts concluded that, with the Pfizer/BioNTech jab, people should get their second dose 21 to 28 days after the first, with an ‘outer limit’ of six weeks.

This maximum limit is still only half as long as the UK plans to leave it, with hundreds of thousands of people being told they could have to wait three months.

Tags: 87, Bakewell, crowdfunds, Joan
You may also like
Celebrities News