Australia’s best-known online alcohol service is being investigated over the death of a Sydney man after delivering three bottles of wine to his home a day, almost every day, in the weeks before he died.

The NSW alcohol regulator is investigating Jimmy Brings over whether it broke the state’s responsible service laws in delivering wine and spirits to the 49-year-old man’s Bondi home, including two identical orders that were placed within 10 minutes of each other. 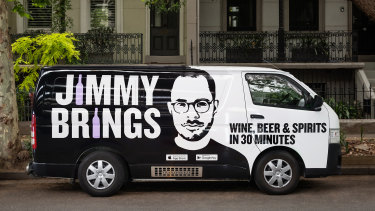 Jimmy Brings is being investigated over the death of a man in Sydney’s eastern suburbs.

A spokesman for Liquor and Gaming NSW said the watchdog was examining the circumstances of the man’s death in June 2018, in particular whether the 30-minute delivery service breached liquor laws by enabling excessive alcohol consumption, but declined to comment further.

The regulator previously reviewed the man’s death after speaking with the company, neighbours and NSW Police.

No action was taken against Jimmy Brings, however Liquor and Gaming found there were regulatory loopholes that spurred the government to tighten alcohol delivery laws in July, including preventing deliveries to intoxicated people and verifying the identity of the customer was the same as the recipient.

Nadine Ezard, the clinical director of St Vincent’s Hospital’s drug and alcohol service, said even as an expert she would “be challenged in that brief moment to be able to tell you whether someone is intoxicated or not”.

“In pubs and clubs we have an RSA … is there an expectation the person delivering has to make an eyeball assessment?” Dr Ezard said.

Deakin University professor Peter Miller, an expert in alcohol-related harm, said that as booze sales boomed during the pandemic, prompting the proliferation of online ordering platforms, stronger safeguards needed to be put in place that included the collection of data relating to deliveries rather than overall sales.

“It’s really a system designed to fail, and it’s going to fail the community,” Professor Miller said, adding a two-hour wait should also be imposed to mitigate impulsivity, as well as limiting the hours of delivery. In NSW, deliveries are available between 9am and midnight and customers can now also exclude themselves from online providers.

Sources with knowledge of the investigation who are not authorised to speak publicly said it was recently reopened after a review of the company’s sales data found a large increase in the orders placed by the man in the fortnight before he died.

The orders included multiple bottles of alcohol being delivered nearly every day. On one occasion he placed an order before placing the same order 10 minutes later.

According to the sources, the man spent $24,000 with Jimmy Brings on almost 300 orders in the three years before his death, with the increasing number of orders prompting the regulator to scrutinise the coroner’s findings as to how he died. 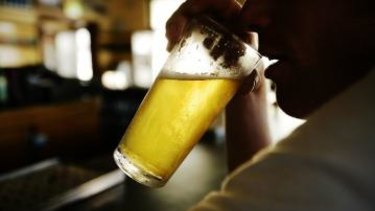 Alcohol sales have boomed during the pandemic.Credit:Andrew Quilty

A spokesman for Endeavour Group, which owns Jimmy Brings, as well as Dan Murphy’s and BWS, said the company’s philosophy was to “exceed legal and regulatory compliance” with a range of initiatives to reduce harm and lift the overall industry standard.

“All Endeavour Group (including Jimmy Brings) drivers are trained in the responsible service of alcohol and all same day alcohol deliveries must be delivered to an adult over the age of 18 years and who is not intoxicated,” the spokesman said. “We utilise independent third-party mystery shopping of these and our other RSA practices.”

According to the company, Jimmy Brings also has an automated RSA system that red-flags customer orders online that could be high risk, allowing for intervention.

A review of more than 200 online alcohol delivery services in 2018, published by the Sax Institute on Wednesday, found only 5 per cent included a policy on their website relating to the delivery of goods to an already intoxicated person and 60 per cent did not require a customer to prove they were aged 18 or older.

New laws introduced in July were also influenced by recommendations from the review, conducted by researchers from Northern Sydney Local Health District, as well as a government sting in 2020 in which deliveries were made to schools and playgrounds.

Study co-author Paul Klarenaar, director of health promotion at the local health district, said there were concerns about appropriate oversight of the rising number of services in the industry, noting the new rules only govern same-day delivery.

But Mr Klarenaar said COVID-19 measures allowing small bars and bottle shops to deliver to homes during NSW’s lockdown meant the number of businesses effectively operating in this way could be closer to 12,000.

“Without proper control that would be able to generate additional emergency presentations, impact public health more generally and also likely result in additional assault and domestic violence incidents,” he said.

As spending on alcohol home delivery boomed across the country during the pandemic, alcohol-related deaths also rose, increasing by 8.3 per cent in 2020 compared to 2019, according to the Australian Bureau of Statistics.