The White House has responded again to spitfire rapper Nicki Minaj’s claim that she was invited there to discuss COVID-19 vaccines.

On Thursday, Biden administration officials doubled down by saying they had only “an early-stage call” with Minaj to answer her questions about vaccine safety. 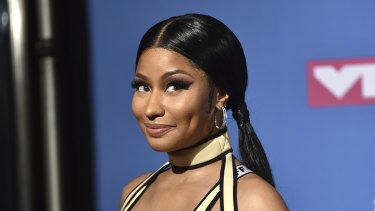 Some concerns about the COVID vaccine: Nicki Minaj at the MTV Video Music Awards in 2018.Credit:AP

Minaj, who made tidal waves this week with tweets expressing her doubts about COVID vaccines, told a different story on Wednesday.

“Do y’all think I would go on the internet and lie about being invited to the f—–g White House? Like what? Do you guys see what is happening right now?” Minaj said in a 14-minute Instagram Live video.

Nonetheless, the matter made its way to a White House press briefing Thursday, where Press Secretary Jen Psaki was asked to address the discrepancy between the administration’s account and the rapper’s.

“We don’t see this as a point of tension or disagreement. I want you all to know that we engage all the time with people who have big public platforms or profiles,” Psaki said.

“We offered a call with Nicki Minaj and one of our doctors to answer questions she had about the safety and effectiveness of the vaccine. This is pretty standard and something we do all the time,” she added.

“We’re not even at the point of discussing the mechanism or the formats or anything along those lines. It was simply an offer to have a conversation and an early-stage call.”

Psaki said she hoped that people who have a platform as large as Minaj’s would “project accurate information” about the effectiveness, safety and availability of the vaccine. 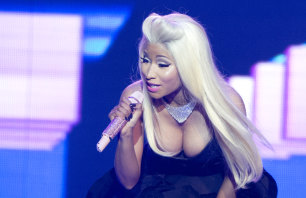 Nicki Minaj performs at the Brisbane Entertainment centre in Brisbane in 2012.Credit:Harrison Saragossi

“At the same time, and both can be true, we also recognise that people have questions out there,” she said.

“In our outreach to celebrities, it follows a pretty standard process: Officials who are working on these issues engage in regular conversations, offer to answer questions — offer to do that privately sometimes, sometimes it’s done publicly.”

On social media Wednesday, Minaj shifted the narrative away from the ridicule of her cousin’s friend’s swollen testicles story and instead waded deep into race relations and real questions she had about healthcare. The Super Bass artist accused her critics of trying to “assassinate” her character.

She also touched on multiple facets of the viral controversy — from her bizarre alliance with Fox News’ Tucker Carlson, alleged betrayal by MSNBC’s Joy Reid, involvement of the Trinidad health ministry and social media activism.

Minaj’s responses also moved from Twitter — where the 38-year-old has more than 22 million followers — to Instagram, where she has a much larger following of 157 million, after she claimed Twitter locked her account late Wednesday.

(A Twitter spokesperson disputed that, telling The Times that the platform “did not take any enforcement action” on her account.)

“If Malcolm X were here, he’d be asking questions & most of y’all that holler ‘black lives matter’ & ‘protect black women’ would be telling him to shut-UP & fall in line. Y’all say these ppl’s names but embody the spirit of a coward.”

In her video, Minaj said that her management and publicist were on the phone call with Biden administration officials, who she said invited her to the White House to speak with Dr Anthony Fauci, director of the National Institute of Allergy and Infectious Diseases, as well as Surgeon General Dr Vivek Murthy.

The rap star, who skipped the Met Gala earlier this week and said she recently contracted COVID-19, said she told them she’d rather not travel and would prefer to do some sort of livestream.

“And they said they’re open to me choosing a platform to do [an Instagram] live. But they had never taken that off the table for me to come to the White House,” she said in Wednesday’s video.

She also opted to have a public conversation about it because “it would not feel genuine if it was something that I discussed with them only, privately, because then it would come off disingenuous to my fans because it would sound like I was kinda, like, selling them the vaccine. And everyone agreed.”

Psaki made no mention Thursday of the high-profile doctors Minaj name-checked.

The rapper noted that some officials told her management and publicist that they weren’t happy about her tweeting about the White House, but insisted she wouldn’t make something like that up and slammed those who went on Twitter to “try to make a fool” of her.

Minaj’s publicist did not immediately respond to a request for comment Thursday.

The artist also unleashed her fury on the Democratic party and liberals affiliated with it, bashing anyone telling her she can’t agree with a Republican. She argued that since her critics could no longer make fun of her cousin’s friend’s story, they would now “have to attack her personally” instead.

“Eighty percent of the artists that y’all following right now feel like I feel about the vaccine and are too afraid to speak on it,” she said.

“And guess what they’re doing right now? If they assassinate me and assassinate my character and make me look crazy or stupid, guess what, no one else will ever ask questions again. Don’t you see what’s happening?

“It’s disgusting that a person can’t speak about just questions or thoughts they’re having about something they’re gonna have to put in their body, that this attack is this hateful and purposeful.

“You see, they have to get people who just get up there [and] make women of colour look f—— dumb. They can’t deal with smart women. Whenever a smart woman challenges anything, they’re called a b—- or crazy. Pick one or both.”

Still, Minaj said she respected the White House officials who actually reached out and said it was “a really nice gesture and this has nothing to do with them”.

“We’re living in a place without free healthcare. So anybody in this country has the right to question anything about their health. Because if your health mattered that f—— much, there would be free f—— healthcare, bozos,” she argued.

Minaj’s viral claims about the vaccine this week elicited responses from a number of medical experts, including Fauci, who debunked her cousin’s friend’s story about vaccines causing swollen testicles and impotence.

The controversy — ripe fodder for Twitter memes and late-night hosts — also prompted reactions from British officials and Terrence Deyalsingh, the Trinidad & Tobago health minister, who blasted the rapper Wednesday and said he and his team “wasted so much time yesterday running down this false claim”.

Minaj further slammed that uproar in the video, saying she was bothered when she spoke to her family in Trinidad who said they couldn’t work if they weren’t vaccinated.

“Could you imagine being in a country where it’s not that easy to get on Instagram… If I have to be their voice, then I will,” she said.

“I was born in Trinidad. I am a self-made woman. So at the heart of who I am I am always going to root for the underdog.”