Melbourne’s hospitality businesses are bracing for a New Year’s Eve marred by coronavirus-related staff shortages while still hoping to avoid a wave of booking cancellations similar to that in the lead-up to Christmas.

With almost 18,000 active cases in the state on Tuesday, and 2735 new cases recorded, thousands of Victorians are facing sudden bouts of illness and isolation. 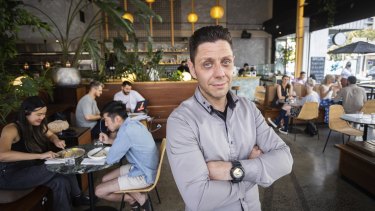 Cristian Folletti works at Abacus Bar in South Yarra. Businesses are seeing patrons cancel bookings due to COVID, but crucially having to cover repeatedly for staff because they’ve lost people to exposures.Credit:Paul Jeffers

Greg Kahan, from The George on Collins in Melbourne’s CBD, said at least two of his staff had flagged they could not work New Year’s Eve after catching the virus. He says staffing is going to be a “nightmare going forward”.

Like many business owners, he experienced a rash of cancellations last week as customers tried to avoid large-scale gatherings and reduce the risk of coronavirus exposure before Christmas.

“I’m very nervous about New Year’s Eve in terms of numbers of patrons … everyone seems to just be getting (COVID-19) at the moment,” Mr Kahan said.

“It’s just a rollercoaster. You just don’t know what’s going to happen over the next few weeks – is this all going to subside or is it going to carry on?”

“Again, Omicron is another dampener, but it’s not the end of the world”.

Victorian Chamber of Commerce and Industry chief executive Paul Guerra said there was still hope that this year’s celebrations could be “symbolic” of Melbourne’s hospitality industry returning to form.

For now, he says, Melburnians have not made the widespread booking cancellations they did in the weeks before Christmas.

“Owners are really pumped because obviously people have been turning out really well, but there’s also the nervousness around staff availability, and customers cancelling at late notice due to the COVID situation,” Mr Guerra said. 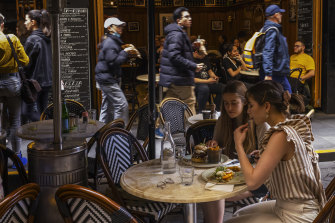 Hospitality businesses are again hoping for packed tables on New Year’s Eve after another year of COVID disruptions.Credit:Getty Images

“This year, we want a clean run at it. People have come out and supported hospitality and retail really strongly.

“Businesses that have struggled for the last few years are starting to have hope and certainty that they’ll be able to trade through it and start making inroads into the debt that’s been amassed.”

Over the last eight weeks of trading, Abacus Bar and Restaurant’s reservations manager Olivia Zhang has repeatedly had to race into the South Yarra venue after COVID exposures left them suddenly short-staffed.

“If we had to cancel a booking, that would just deliver disappointment, and we don’t want that,” she said.

”We’re trying our best to keep everybody safe and be open every day. We’re lucky when it comes to New Year’s Eve, because Abacus is a really spacious area and everyone can keep a safe distance.“

Instead of the usual rooftop fireworks display in the CBD, the City of Melbourne has resorted to ticketed celebrations built around localised fireworks shows in Flagstaff Gardens, Treasury Gardens, Alexandra Gardens and Docklands, with 42,000 tickets already snapped up.

Lord Mayor Sally Capp said “tremendous effort” had been put into creating safe New Year’s Eve festivities fitting of a city that has been through so much during the pandemic.

In Sydney, NSW Premier Dominic Perrottet has urged the city’s partygoers to forge ahead to stimulate the city’s battered economy after its 107-day lockdown.

“After doing it tough during lockdowns, our traders are obviously keen to recoup some losses over the traditionally busy holiday season,” he said. “Everyone respecting the rules gives them the best chance of achieving this extra income.”

When it comes to Victoria’s COVID-safe rules, masks are still required at indoors venues for those aged eight and over, with the Chief Health Officer Brett Sutton “strongly recommending” face masks outdoors when you can’t socially distance.

Acting premier Jacinta Allan said the Victorian government’s advice for New Year’s Eve remained that people should make their own decisions about how they commemorate the end of 2021.

“How people make their own personal choices about their movements over this period of time is a matter for them,” she said on Tuesday.

“I’d hope that part of those choices are continuing to follow those mask-wearing rules. If you’ve got the chance to pop out and get vaccinated for your third dose, or even if you haven’t had the chance to get the first or second dose, please add that in to your activities over this festive season.”