Italy has seen its highest number of coronavirus deaths in a single day with 41 new fatalities in the worst outbreak in Europe.

The latest figures – the highest the country has seen in one day – brings the death toll to 148.

It comes as Italy announced a clampdown on people visiting their elderly relatives in its latest bid to contain the deadly disease, that infected a further 769 today bringing the total to 3,858.

The government has placed restrictions on nursing home visits and has urged the elderly to stay inside unless strictly necessary. 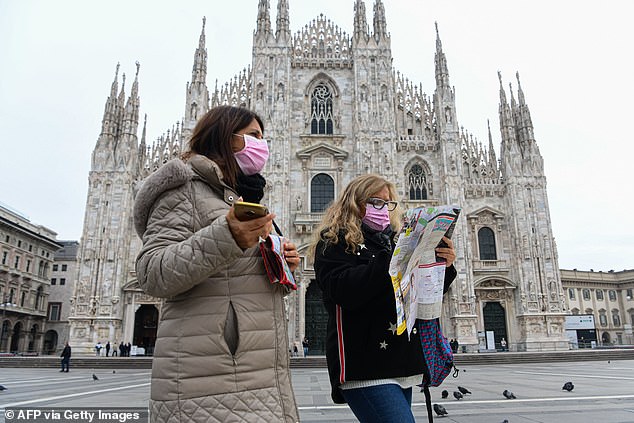 Two tourists from Argentina wearing face masks walk in front of Milan’s Duomo cathedral today, with northern Italy at the centre of the outbreak

Meanwhile, ministers are facing growing anger over school and university closures which are due to continue until March 15.

The World Health Organisation’s Italy adviser has called the drastic measure ‘useless and harmful’ because a 10-day closure is shorter than the 14-day incubation period.

The government has also announced plans for an economic stimulus, with budgetary targets abandoned to tackle the growing crisis.

Italy’s foreign minister accused CNN on Thursday of ‘distorting reality’ by appearing to suggest in a map that much of the world was catching the new coronavirus from his Mediterranean country.

Luigi Di Maio posted a screen grab from the US television news network with the offending image on his Facebook page.

The map showed more than a dozen red arrows shooting from Italy to other parts of the world.

Di Maio said the map made it looks like ‘Italy seems to the origin of the outbreak’.

‘This is a distorted view of the reality,’ he wrote.

‘But the point in not CNN, this is just one example, because there are also (other) international media painting Italy in the wrong way.’

‘Nobody must lose their job because of coronavirus,’ Italian economy minister Roberto Gualtieri told reporters following a cabinet meeting today.

Rome will now ask the EU for the go-ahead to increase its budget deficit target from 2.2 per cent to more than 2.5 per cent.

The money would be used to support the hard-pressed health service and civil protection agency, while also helping families, workers, and firms, Gualtieri says.

Prime minister Giuseppe Conte said Italy had set aside €7.5billion (£6.5billion) to help the economy through the virus outbreak.

Conte has justified the school closures by warning that there might not be enough intensive care units to treat patients if the virus continues its ‘exponential’ spread.

More than 8.5million children and teenagers began missing classes today because of the virus outbreak.

The World Health Organization’s Italian government adviser Walter Ricciardi called it ‘useless and harmful’ because 10 days is too short a period to contain the virus.

The government’s own Scientific Technical Committee called the idea of closing shools to halt the spread of a disease that has killed 107 in Italy ‘devoid of scientific evidence’.

And even Education Minister Lucia Azzolina said she hoped ‘the pupils will return to school as soon as possible’. 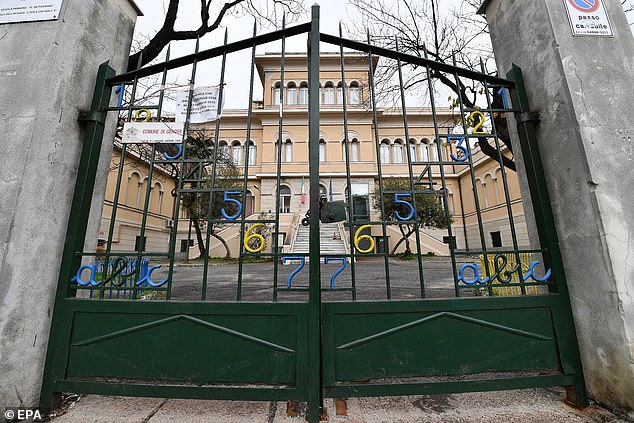 Some have lobbied against the move because it forces working parents to stay home with their children.

Commentators think the government’s main fear is that a virus whose spread has been contained to pockets of the richer north will start appearing across the poorer and less developed south.

The Mediterranean country’s health system is regionally organised and the south’s hospitals may simply not be able to cope with a flood of contagious patients.

Italy already has first-hand experience of what that could mean, after its first cases stemmed from a single man who was hospitalised for pneumonia but not immediately diagnosed for the new viral strain.

He was isolated from the others only when it was too late.

Prime Minister Giuseppe Conte effectively admitted as much in a video he posted on Facebook after a day of chaotic government meetings and debates.

‘In case of exponential growth (in the number of cases), not just Italy but any other country in the world would not be able to manage the situation,’ Conte warned.

The government has repeatedly stressed that the overwhelming majority of the deaths were among people in their 80s and 90s and who were suffering from other disease.

In a separate decree today, the government is also limiting access to the elderly in nursing homes to prevent possible contagion. 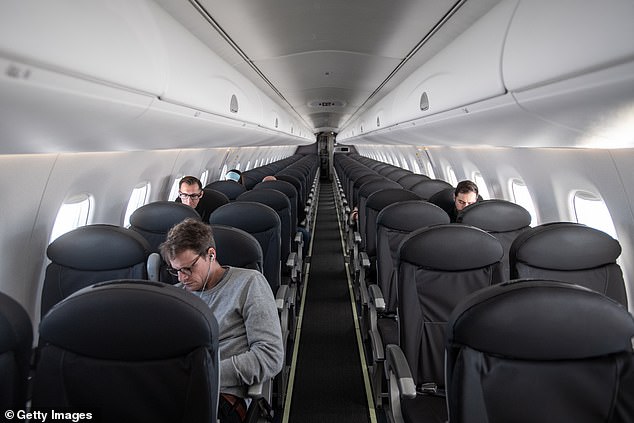 An almost empty British Airways passenger plane flies from Milan to London today, with many countries now imposing restrictions on travel from Italy

Italy, the epicentre of the outbreak in Europe, has the world’s oldest population after Japan.

The 107 people who have died so far in Italy are all elderly, sick with other complications or both.

The government is adopting a range of other measures altering Italians’ everyday lives.

Football matches and other sporting events will be played behind closed doors for a month.

Italy’s Six Nations match against England has also been called off because of virus fears.

People are being advised not to greet each other with the customary pecks on both cheeks.

Cinema goers are being kept rows of seats apart and just about everyone is being advised to stay an arms-length away from others in a crowd.

‘Freedom has been taken hostage,’ the La Repubblica newspaper grumbled in an editorial.

La Stampa praised Conte for having the ‘courage’ to make an unpopular decision on schools – ‘even if it is not a given that it is the right one’.

Tags: bans, elderly, Italy, R, to, visits
You may also like
Celebrities News