When Labor cabinet minister Marlene Kairouz peered into a ministerial conference room at the top of Exhibition Street on March 10, 2020, she joked that all her political faction’s “trouble makers” were “in one room”.

The comment was light-hearted but Kairouz was not wrong. 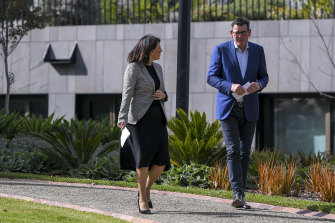 The room was hosting a political meeting to plot the expansion of an alleged substantial branch-stacking operation. The aim was to deliver Labor’s “Moderates” faction the voting numbers to influence state and federal preselections and key party positions.

What unfolded inside that Exhibition Street meeting room, and in the surrounding weeks and months, have cost Kairouz, 45, her place in Daniel Andrews’ cabinet and killed off the political career of the man leading that day’s meeting, Labor kingmaker Adem Somyurek.

Ms Kairouz resigned from cabinet last year after The Age and 60 Minutes revealed she, Mr Somyurek and assistant treasurer Robin Scott were allegedly involved in the largest branch-stacking scandal to engulf the ALP.

Yet Kairouz’s troubles are far from over. What happened at that March meeting threatens to end a 23-year political career that included stints as a Darebin councillor in Melbourne’s north, an official at the Shop, Distributive and Allied Employees Association – a huge force in Labor’s Right faction – and peaked with her elevation to cabinet in June 2016. 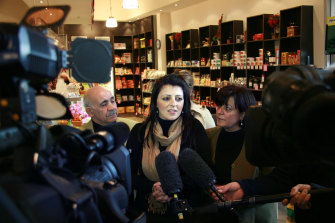 Marlene Kairouz with her parents on the day she was elected to Parliament in 2008. Credit:Melanie Faith Dove

When the former medical laboratory scientist entered Parliament in 2008, she spoke of a commitment to social justice born of values instilled by her Lebanese migrant parents. She also described the battle she’d waged navigating the ALP’s byzantine internal processes to win her seat: “As it turned out, I managed to win in five different ALP processes” during a “highly emotional and competitive period”. It is those same processes she is now accused of exploiting for her faction’s benefit.

Victorian Labor Party administrators Steve Bracks and Jenny Macklin have charged her under party rules with a string of branch-stacking offences and referred her to the party’s internal disputes tribunal on the basis of what she said in the March 10 meeting with Somyurek and about five other factional operatives, who also held jobs as taxpayer-funded parliamentary staffers.

Kairouz has rejected the accusations brought by Bracks and Macklin and denies she has been involved in, or has promoted, branch stacking – a process which involves recruiting non-genuine members in order to rig votes for preselection and ALP positions.

“I have never stacked in my life,” she recently said in a public statement. 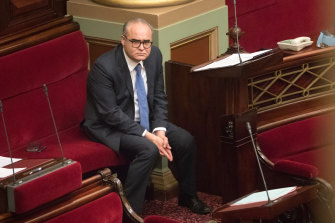 In another seemingly clear indicator of branch stacking, he goes on to say how his operatives “have been putting thirteens”, a reference to the maximum number of new members that can be added to a branch in a single go.

Kairouz responds to Somyurek’s spiel about his statewide “lay of the land” enthusiastically.

As Somyurek dictates orders, Kairouz occasionally interjects with a suggestion about whether a certain operative is better placed than another to gather members.

She also tells the meeting she has certain branches under control – “Oh mate, we’re fine” – and encourages Somyurek’s operatives to liaise with her own or give “a little bit of support” to other branches.

Kairouz has in her recent public statement denied the allegation – currently being investigated by anti-corruption commission IBAC – that she was was using taxpayer-funded office staff to sign up party members. She has stressed that her staff members only engaged in such activity in their own time. In the meeting with Somyurek, Kairouz doesn’t draw that distinction, saying only that signing up or renewing members is labour intensive.

“My office is starting … doing their renewals. Done. But that takes … and last time … we were doing it for everybody and my staff were just working on that because it was rushing. It was terrible.”

Kairouz’s other key defence appears to involve labelling her accusers as racist hypocrites because she has been accused of conduct men in the party have gotten away with. “It is interesting that white Anglo-Saxon men who have engaged in branch stacking to get into Parliament are not being investigated," she said in her recent statement.

This appears to be an attack of Daniel Andrews. In a speech to the upper house in December last year, Somyurek used parliamentary privilege to accuse the Premier of branch-stacking activity in the 1990s in Melbourne’s south-east. “Andrews was stacking for the local [Socialist Left] aligned local member,” Somyurek said. Whatever the truth of the historical allegations involving Andrews, there is no tape recording of him discussing branch stacking.

Kairouz’s biggest issue in rebutting the case put by Bracks and Macklin is that her own tape-recorded words don’t accord with her protestations of innocence.

For instance, in her written statement rejecting the branch-stacking claims, Kairouz suggests it makes no sense for elected MPs to bother stacking on the basis that they have already won their seat. But in the meeting with Somyurek, Kairouz appears to relish the power delivered by her faction’s growing membership numbers.

“We are it. They don’t do anything without us,” she says of some of her Labor colleagues.

“We’re very big, but if we can continue to grow, well, why not?”

Tags: could, Inside, meeting, that, the
You may also like
Celebrities News