When a man calling himself “Rex” handed Nevinka Curtain’s daughter a tiny rag doll kitten from the back of his four-wheel drive in South Melbourne, Ms Curtain thought they had finally found the perfect feline for their family.

Looking back at the interaction, she says the red flags were clear, but seeing her daughter’s face light up as she cradled the kitten in the street, emotions took over. 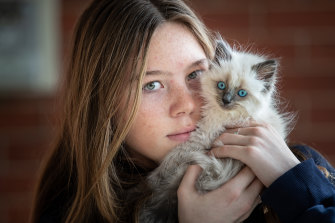 Howie was bought from a backyard breeder and nearly died soon after. He is now recovering with owner Emily, 13.Credit:Jason South

Within days, they were racing the kitten, named Howie, to an emergency vet after he went limp, clinging to life. They realised they’d been duped by a charismatic, illegal backyard breeder.

“We believed everything he said, but as soon as we told our vet we’d bought Howie off Gumtree, their hearts sank,” Ms Curtain said.

The RSPCA and animal welfare advocates say COVID-19 restrictions and booming shelter adoption rates are prompting more Victorian families to turn to the internet to find a pet.

They say many are unknowingly fuelling the illegal sale of pets from puppy farms and illegal backyard breeders disguising themselves as legitimate salespeople. Buyers often spend thousands and leave with sick kittens and puppies. 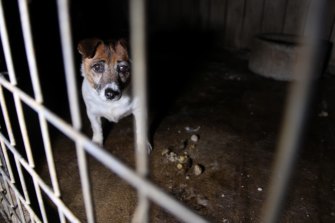 A dog found at a puppy farm in conditions rife with disease.Credit:Debra Tranter

Lost Dogs Home spokeswoman Suzana Talevski said the pandemic had led to record demand for dogs and cats. In August alone, 416 adoptions were recorded, double the average pre-pandemic rate. Supply to meet the demand has been scarce.

While she welcomed the rise in adoptions from rescue groups, Ms Talevski was particularly concerned at a recent increase in the number of puppies and kittens aged under one being dumped at shelters, many arriving with health and behavioural issues. She said it was believed many of these animals had been found online and bought from illegal breeders.

“Some have never seen daylight. They don’t know how to walk around because they have been confined to such small quarters, so we’d hate to think that kind of industry is being kept alive because of the shortage at shelters right now,” she said.

“We are asking people to be patient and wait for animals to come back through the shelters soon, because they really need you. They’re the state’s most vulnerable cats and dogs and they will need your help again. 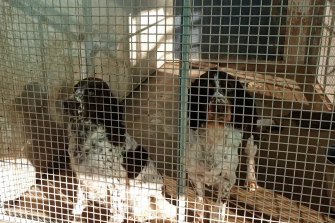 “Save yourself the heartache and your money and do your research. You should be able to freely attend [sellers’] premises and look around to see the conditions animals are being held in. Don’t take their word for it.”

The sale of animals in public places became illegal as part of the 2017 puppy farm and pet shop amendment to the Domestic Animals Act.

RSPCA Victoria’s new chief inspector, Michael Stagg, said the act made it clear that all dogs and cats must be sold from either a registered domestic animal business, a private residence or at a place where an animal sale permit is in place.

He said the RSPCA had noted a rise in calls from the public about the illegal sale of animals during the pandemic and it believed some of the pets were coming from intensive breeding operations.

“High demand for pets during the pandemic meant many Victorians sought alternate sales channels and unknowingly purchased animals from illegal businesses that sell animals from public places to hide the location of their operations,” he said.

Data from anti-puppy farm campaign Oscar’s Law shows a 25 per cent increase in tip-offs about illegal breeders to its hotline since the start of 2020.

Last month, Mornington Peninsula police arrested and charged a woman after she made $31,000 from five alleged French bulldog puppy scams advertised online over the previous 15 months.

Detective acting Sergeant Catherine Weeks said while police appreciated that people may look for a furry friend to get them through lockdown, the current environment was allowing opportunistic scammers to take advantage of people and their families.

Ms Curtain said her family was still coming to terms with being scammed – paying $2000 cash for what they were told was a healthy, pure-bred kitten – as little Howie recovers at home after numerous vet visits.

She said she had since learnt the adoption and veterinarian documentation she had been given was false and she believed the person responsible was a convicted illegal breeder previously identified in the media.

“Most people don’t think others are capable of this until something like this happens to you. You see deadbeats doing this on the news, but you never really think it’ll happen to you,” she said.

“His story made sense to me, that we couldn’t come inside his unit because of coronavirus, so we went to the back of his 4WD on the street and other people were standing in a line excited just like we were. By the time you realise, they’ve deleted everything, their mobile number is gone and they’ve gone on to create new profiles. Now we don’t even know if [Howie] has been wormed or vaccinated.”

Victims of online scams can make a report at cyber.gov.au. Anyone with any information on scams can contact Crime Stoppers on 1800 333 000 or via crimestoppersvic.com.au. Report to RSPCA Victoria’s major investigations team by calling 9224 2222.

Tags: as, illegal, lock, Pet, rise, Sales
You may also like
Celebrities News