The fight over territory can become an ugly one at times, as proved by incredible footage of a hyena trying to drag its rival’s head under water and drown it.

A brutal video, published today but filmed in December, shows two animals battling it out for supremacy in the river at a South African game reserve.

The clip, nearly six minutes long and recorded at Greater Kruger National Park, begins with one hyena sinking its teeth into the neck of another.

Field guide and camp manager Vicky Stephenson, 29, stumbled across the savage confrontation after hearing strange noises from her camp in nearby Ingwelala.

‘We were all shocked as it was the first time any of us had seen such a vicious fight between hyenas,’ she told latestsightings.com.

‘It was brutal to watch as the hyena being attacked was already badly injured and looked terrified, exhausted and in pain. 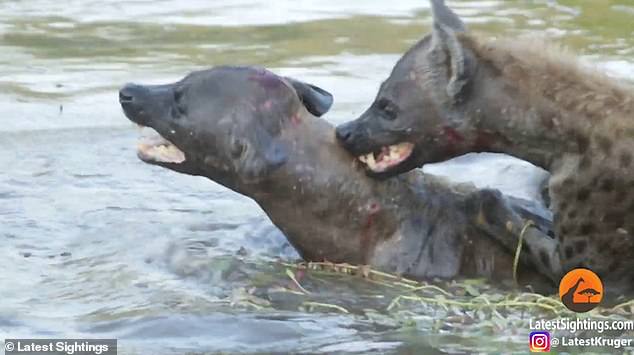 The attacking hyena sinks its teeth into its opponent, and uses its front legs to try and push it down beneath the surface 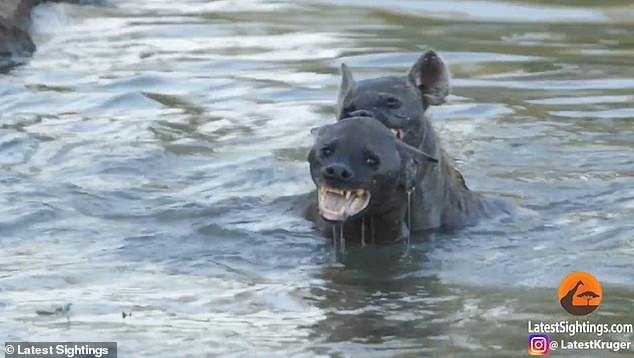 ‘We felt obligated to watch though, as this was fascinating, especially being a field guide and never having seen something like this before – although, not pleasant to watch.’

The two mammals thrash about in the water as they grapple with one another, with the attacker using its front legs to forcibly try and push its opponent down beneath the surface.

The mane of the hyena which is under attack has been completely ripped off as it desperately tries to bite back and defend itself but fails to overpower the aggressor.

The bloody battle rumbles on towards the banks of the river, where the victim of the attack tries to stand its legs on the land and fend off a further onslaught, but it is once again overpowered. 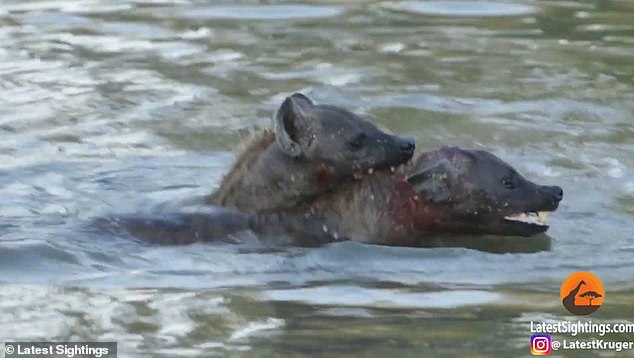 The mane of the hyena which is under attack has been completely ripped off, and despite its best efforts to bite back and defend itself, it fails to overpower the aggressor 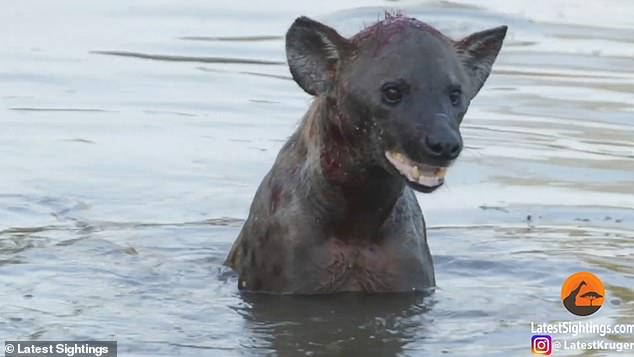 Vicky Stephenson, field guide and camp manager at the game reserve, described the fight as ‘the worst I’ve ever seen’

As the attacker continues to drag its rival under the water, more cries can be heard as it desperately tries to stay afloat.

Unable to drown its opponent, the aggressor eventually climbs out of the water, while the injured hyena again rests its legs on the riverbank as it finally catches breath.

However, Vicky insisted the respite didn’t last long and that a sad ending followed for the animal.

She said: ‘After about two hours of on-and-off fighting, we saw the attacker and two others heading down the road towards the injured hyena and at that stage we knew that the hyena would not survive the last fight so we decided to leave it in peace. 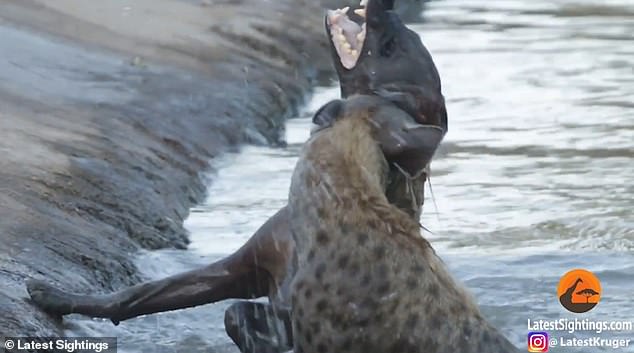 The bloody battle rumbles on towards the banks of the river, where the victim of the attack tries to stand its legs on the land and fend off a further onslaught 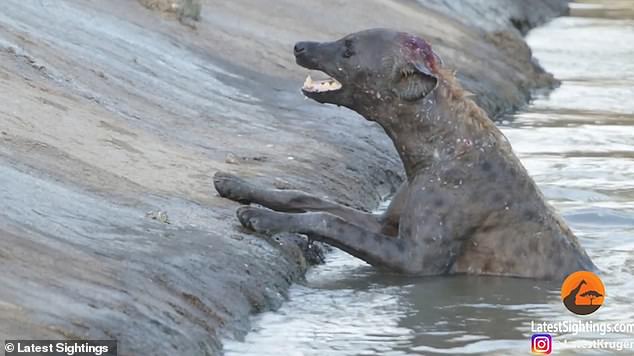 Unable to drown its opponent, the aggressor eventually climbs out of the water, while the injured hyena, pictured, rests its legs on the riverbank as it finally catches breath 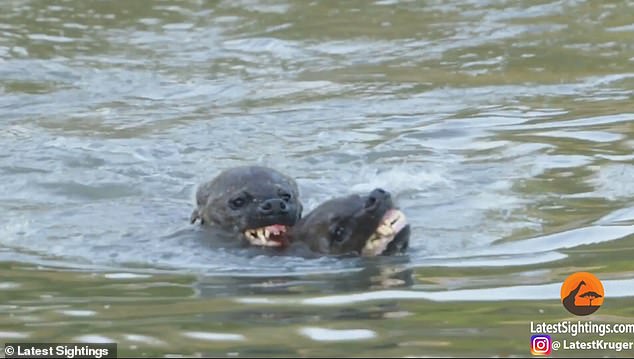 ‘We later found out from the office that the hyena had in fact been killed after we left.’

To try and find out why such a vicious fight broke out, the footage was then sent to a hyena expert, who explained that all four involved were males and that the youngest – identifiable by its teeth – was being attacked after most likely leaving his natal clan to find another to join.

Males will do this to ensure genetic variation, the expert told her.

Vicky added: ‘This was the worst hyena fight I have ever seen. Usually you get the normal scuffle at a kill but never an intense ongoing fight like this one.

‘Even though it’s never pleasant watching any animal in pain, it is nature, which always has a purpose, and if you can stomach it, it’s a sighting you will never forget and probably never get to watch again.’

Tags: Drag, Hyena, rival&apos, to, tries
You may also like
Celebrities News