Not long ago, Bonnyrigg High School in Sydney’s west was the school ambitious parents avoided. It’s surrounded by social housing, and most of its students come from families with little education themselves; some of their parents never learned to read and write.

But in a little more than a decade, enrolments have more than doubled. Local families are returning. Students feel pride in their school, which principal Michael Bryce fosters by putting aside about $40,000 a year to ensure all of them have a uniform, including a pair of high quality leather shoes.

And this year, the school where almost half of students are among the most disadvantaged in the state punched well above its weight in the HSC, finishing 150th in the Herald’s rankings with 160 top scores. More than 80 of its students were distinguished achievers, and one – Melissa Ly Tiev – topped the state in Chinese beginners.

Mr Bryce was proud of the band sixes. But something else pleased him more. “We had fewer band ones and twos than we’ve ever had before,” he said. “Our job is to get the kids out of the band ones and twos, and get the twos into the threes and four. That’s our success story this year, again.”

The Herald’s rankings are based on schools that have at least 150 entries in HSC courses in 2021 based on their success rate of getting band sixes. The NSW government only releases information on the highest-achieving students, who tend to also be the most advantaged students because they have well-educated parents who can support their schooling.

But there are also schools from less advantaged areas that succeed against the odds. Bonnyrigg is one. Beverly Hills Girls High – which achieved its best results in more than five years – is another, as is Bossley Park High.

Doonside High School, where two thirds of students are in the lowest quartile of socio-educational advantage, achieved 12 top scores, which was also its best result since at least 2016.

Mary MacKillop Catholic College is another that punched well above its weight. The Catholic school in Wakeley – near Fairfield – has a similar profile to Bonnyrigg. It teaches students from all over the world, including refugees. 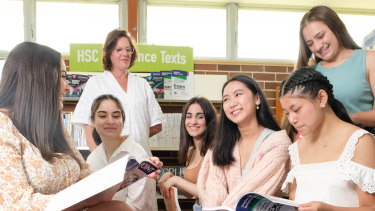 Students at Mary Mackillop Catholic College punched above their weight in the HSC.Credit:Oscar Colman

Its students achieved 102 high scores, giving the school its best-ever rank of 139, ahead of more privileged schools such as St Pius X College and All Saints Grammar.

Mary MacKillop’s principal, Gilda Pussich, said the school focuses on ensuring girls are strong in literacy and numeracy. “The kids work hard, the teachers work even harder, so I think our success is really about our work ethic,” she said.

“The girls have really high aspirations. That’s one of the things we try to do – our motto is around inspiring a love of learning and empowering them to make a difference. We won’t settle for the girls thinking they can’t be successful.

“Our challenge is our communication with the parents, because of the language barrier. The parents put their trust in us and it’s a really beautiful aspect of the school. They trust the school, and they trust that we put their daughters’ well-being and learning first and foremost.”