The mail maidens of Six Triple Eight: How US Army sent its first battalion of black women to Britain to deliver 17m letters to American troops at height of WWII – as Oprah Winfrey is set to star in Netflix film about wartime heroines

They were the first ever contingent of black women in the US Women’s Army Corps to be assigned to overseas service.

The pioneering servicewomen made up the 6888th Central Postal Directory Battalion – and were based in Birmingham during the Second World War.

Now, chat show queen Oprah Winfrey is among a slew of high-profile stars who are are set to head to the UK next month to make a new Netflix film about the battalion.

Six Triple Eight, which will partly be filmed in the historic Little Germany area of Bradford, will also star Kerry Washington and Susan Sarandon. 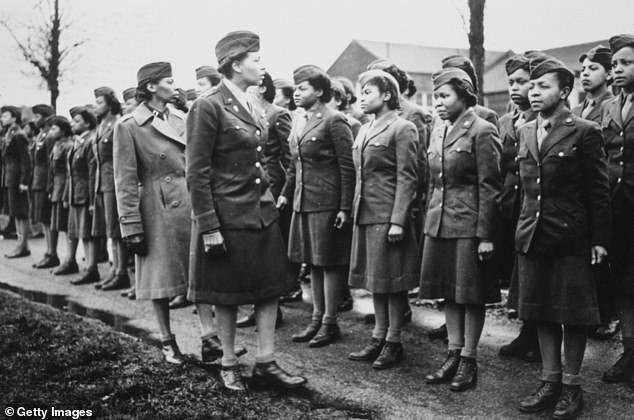 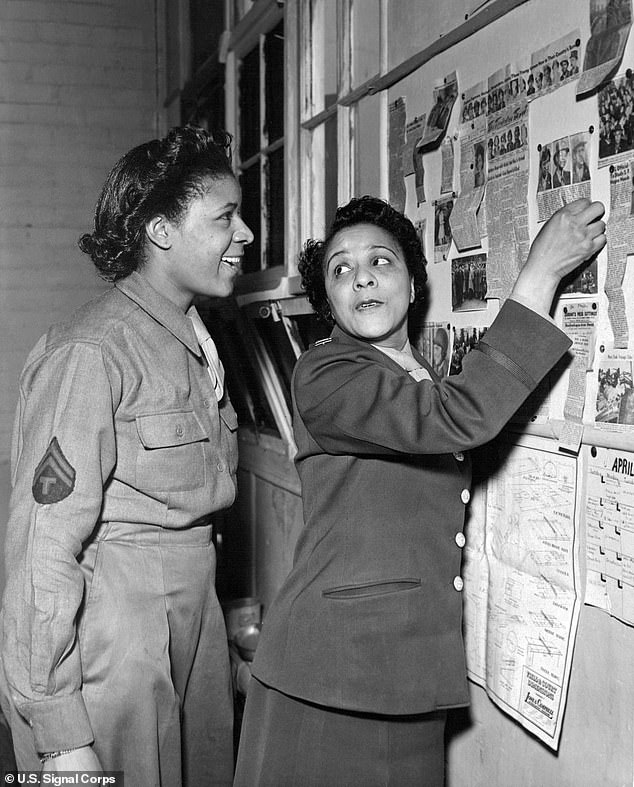 An unnamed servicewoman and Capt. Mildred D. Carter (right) who was in charge of all recreational activities for the battalion

A day of filming is scheduled on February 16, with preparation work by the production company beginning this Sunday, according to the Telegraph and Argus.

Members of the all-female 6888th arrived in Britain in February 1945 on a ship that had to zig-zag across the Atlantic to dodge German torpedoes and ships during a terrifying 11-day voyage.

They were tasked with dealing with a huge backlog of 17million pieces of mail intended for US service personnel.

Before the women got to work, there were hangars filled with undelivered messages and Christmas presents.

The women were tasked with investigating insufficiently or incorrectly addressed mail to try to find out the intended recipients.

They also handled the sad duty of returning mail addressed to servicemen who had died. 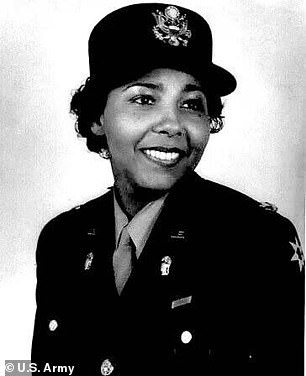 The WAC members were quartered in what had been King Edward School in Birmingham.

However, because of the US-enforced ‘colour bar’, the women were unable to go to local clubs run by the American Red Cross for military personnel.

In response, Major Charity Adams led a boycott of the alternative segregated facilities offered by the Red Cross.

Instead, the 6888th ran their own mess hall, hair salon, refreshment bar and recreational facilities.

The women went on to create a new mail tracking system and processed an average of 65,000 pieces of mail per shift. It enabled them to clear the six-month mail backlog in three months. 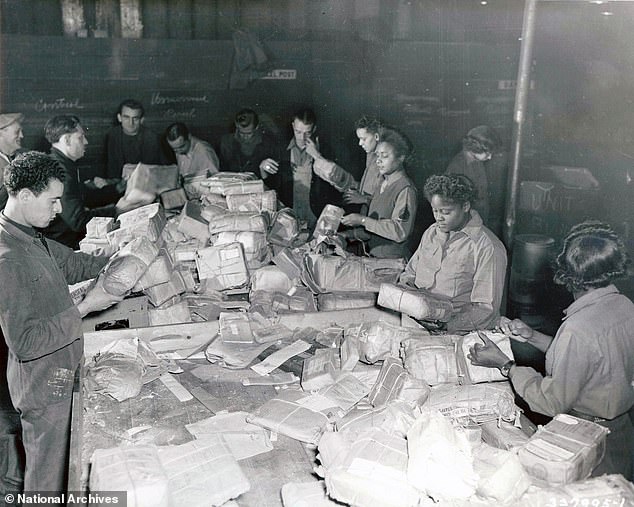 Members of the all-female 6888th arrived in Britain in February 1945 on a ship that had to zig-zag across the Atlantic to dodge German torpedoes and ships during a terrifying 11-day voyage. They were tasked with dealing with a huge backlog of 17million pieces of mail intended for US service personnel 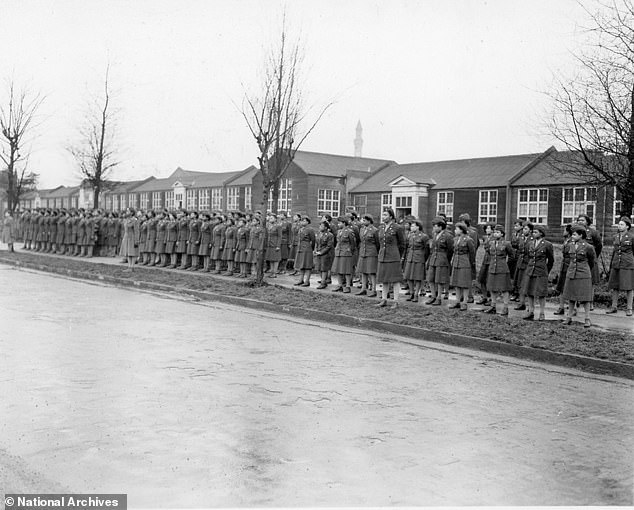 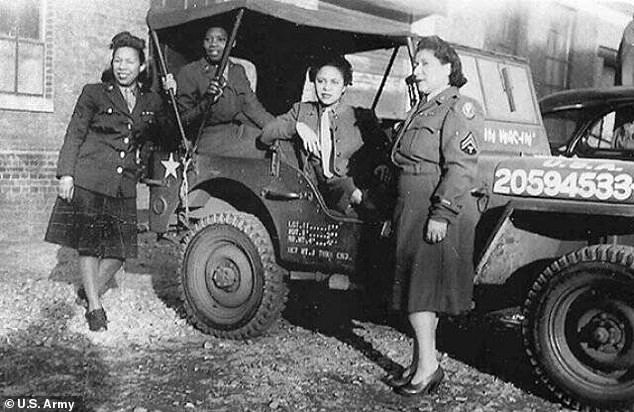 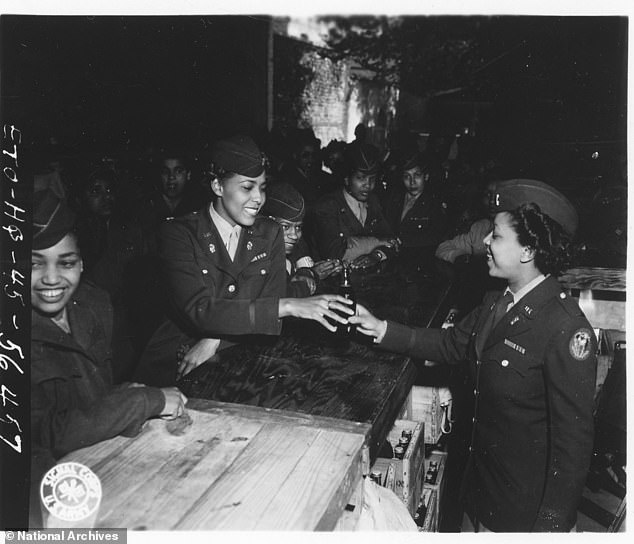 Second Lt. Freda le Beau serving Major Adams a soda at the opening of the battalion’s new snack bar in Rouen, France. Major Adams led the unit in a boycott of the alternative segregated facilities which the Red Cross offered to the women. Instead, they operated their own mess hall, hair salon, refreshment bar, and other recreational facilities 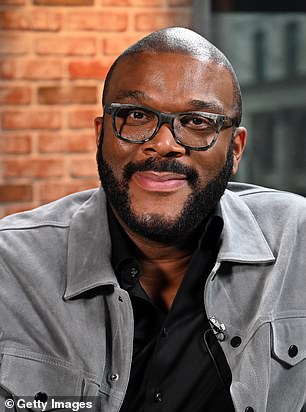 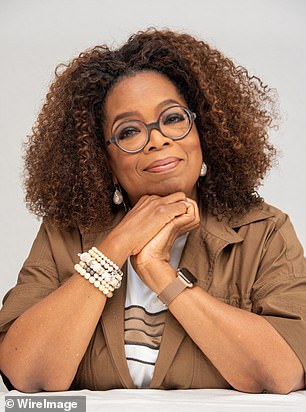 As well as the black members of the WAC, around 150,000 of the US troops who came to Britain were black.

Despite the fact that the British government were uncomfortable with the segregation imposed by the US, the main preoccupation was maintaining good relations with the country’s most important ally.

As a result, the government’s official policy was that ‘it was desirable that the people of this country should avoid becoming too friendly with coloured troops’.

However, ordinary Britons are known to have often acted favourably to black troops.

The situation was described in an African American journal at the time by black US journalist Roi Ottley.

He wrote: ‘The people here have a racial tolerance which gives them a social lever.’

Ottley added that black people had ‘social equality here in more ways than theory’ and said racism ‘in the main’ was ‘confined to colonial and military officials.’

Adams and many members of the 6888th sailed back to the US in December 1945 before the Army promoted her to lieutenant colonel – the first African American woman to achieve the rank, according to The New York Times.

She left the armed forces in 1946 to complete graduate school before starting a job at the Veterans Administration and as the dean of a college.

She said that issues of ‘racial harmony, Black acceptance and opportunity’ were unresolved in her memoir.

Adams moved to Germany and studied psychology and learned German while her husband went to medical school – before she spent most of her life to addressing racial justice as an activist in Dayton, Ohio.

The Women’s Army Corps (WAC) was created in 1942, after the US had entered the fight against Nazi Germany and Japan.

Black and white recruits trained together at Fort Des Moines in Iowa but were later segregated into separate units, in accordance with US policy. 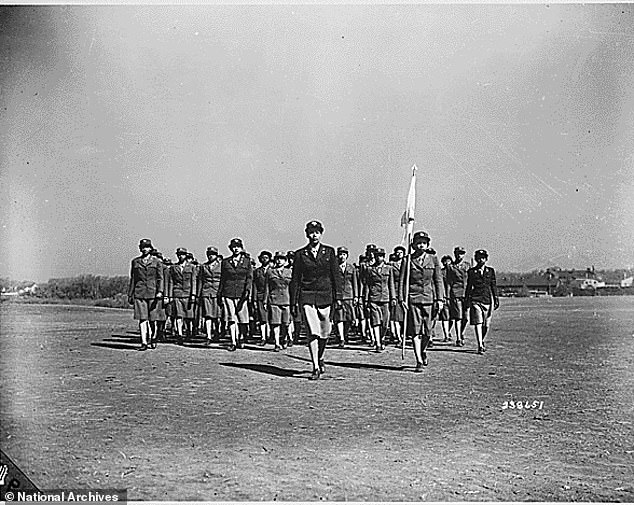 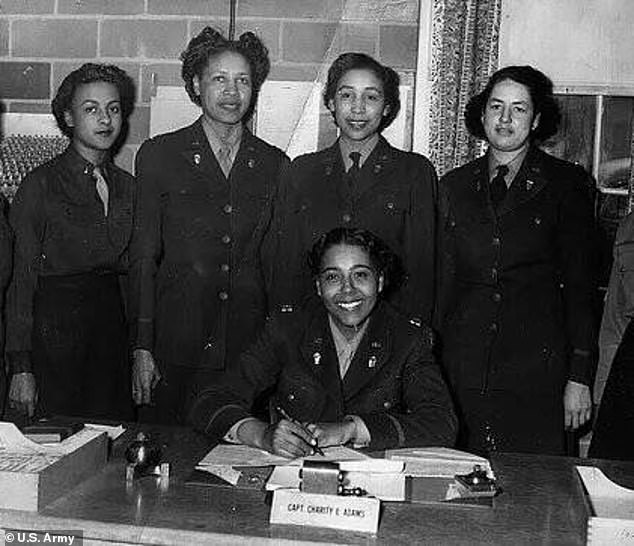 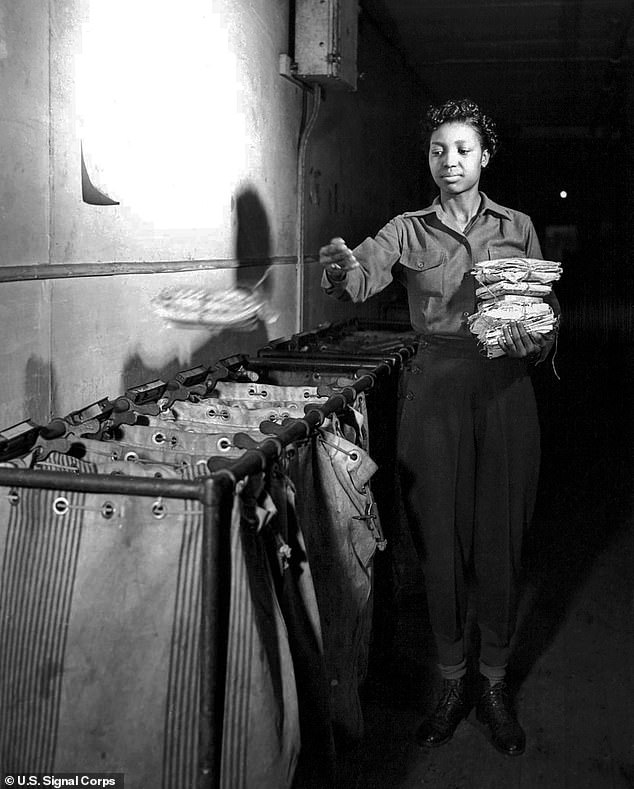 Although most of the 6888th worked as postal clerks (above), others worked in supporting roles around the base in laundry service, motor pools, supply rooms and kitchens  – this made the battalion almost entirely self- sufficient

Those who came to Britain were among 1.5million members of the US armed forces who were posted to the UK during the war.

The WAC – initially set up as the Women’s Auxiliary Corps (WAAC) – was established for ‘the purpose of making available to the national defense the knowledge, skill, and special training of women of the nation.’

When the WAAC became the WAC in 1943, it meant that the serving women had ‘active duty’ status, meaning they received the same rank insignia, pay and allowances as men.

During the war, Life Magazine summed up the WAC’s work: ‘The idea behind [the WAAC] is simply this: Women can do some of the jobs that men are doing in the Army,’ Life’s editors wrote, to introduce the pictures.

‘By taking over these jobs, they can release men for active or combat duty.’ Women learned to become weather forecasters, radio mechanics, cryptanalysts, sheet metal workers and surgical technicians, among many other jobs.

The roles the women carried out were similar to those performed by the UK equivalents of the WAC, including the Auxiliary Territorial Service (ATS).

Streets in Little Germany are set to be made to look how they would have done in the 1940s. Residents received letters earlier this week informing them of street closures.

Six Triple Eight is just the latest TV show or film to be filmed in Little Germany.

Little Germany gets its name from the influx of German merchants who came to Bradford from the 1850s onwards to work in its thriving wool trade.

The unique buildings – 55 out of 85 are listed – in the area were built between 1855 and 1890.  Many were offices or warehouses built and used by the German arrivals.