Think it’s hot now? How Britain roasted in TEN-WEEK heatwave during summer of ’76: Temperatures hit 36C, criminal trials came to a halt, towns were plagued by swarms of insects and water was rationed as country faced worst drought in 250 years

Wildfires have raged, speed restrictions have been imposed on some railway lines and hospitals have already declared ‘critical incidents’.

The hot weather in Britain this summer is set to peak next week, when the mercury could top 39C (102F) in London.

The current non-stop sunshine has evoked memories of the summer of 1976, when there were 15 consecutive days that saw temperatures of 89.6F (32C) somewhere in the UK.

Overall, there were ten weeks of blazing heat that saw widespread drought, mass standpipe use, and even the pausing of the murder trial of the notorious ‘Black Panther’, after a woman suffering from ‘heat exhaustion’ collapsed.

During a First Division football match between Manchester City and Aston Villa, City player collectively lost four stone in weight, prompting the team’s captain to call for an end to ‘summer soccer’.

At that year’s Wimbledon tennis championships, umpires were allowed to remove their jackets for the first time in living memory, whilst major roads were littered with broken-down cars that had overheated.

The extreme weather also caused an increase in the number of 999 callouts to domestic disturbances, as tempers buckled due to the heat. 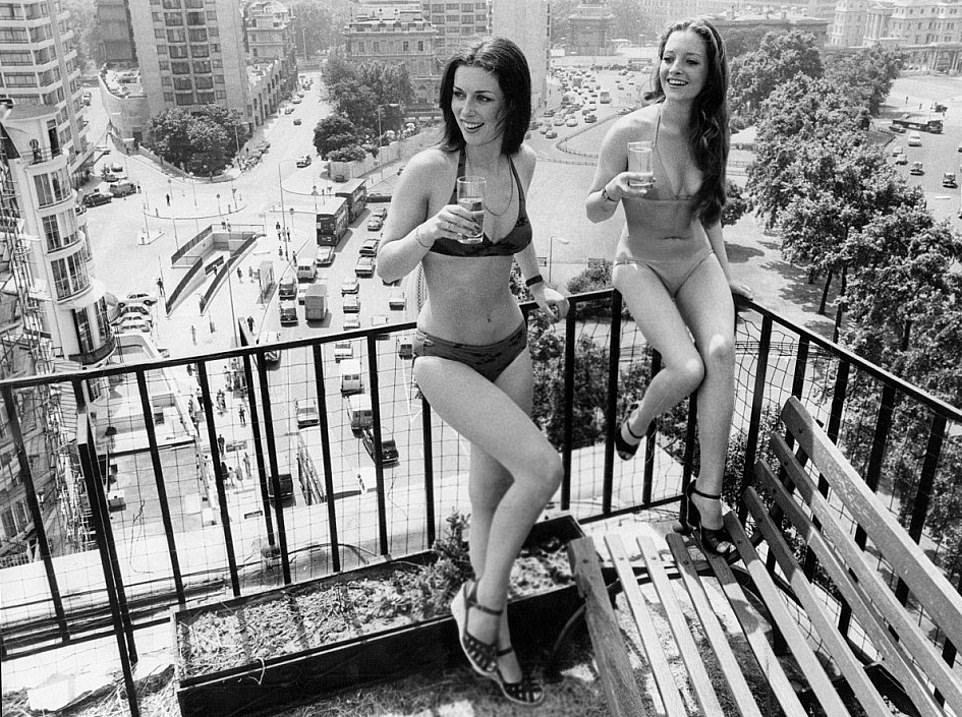 The current non-stop sunshine has evoked memories of the summer of 1976, when there were 15 consecutive days that saw temperatures of 89.6F (32C) somewhere in the UK. Above: Bikini-clad women are seen enjoying the hot weather in 1976 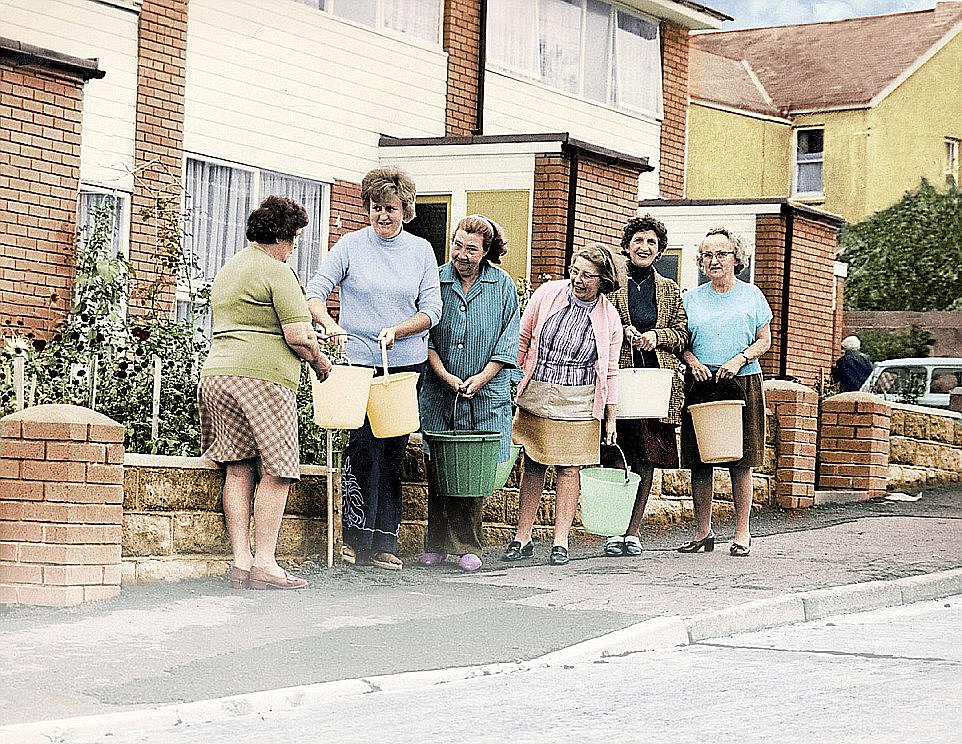 Overall, there were ten weeks of blazing heat that saw widespread drought and mass standpipe use. Above: Residents collect water from a standpipe in Northam, Devon 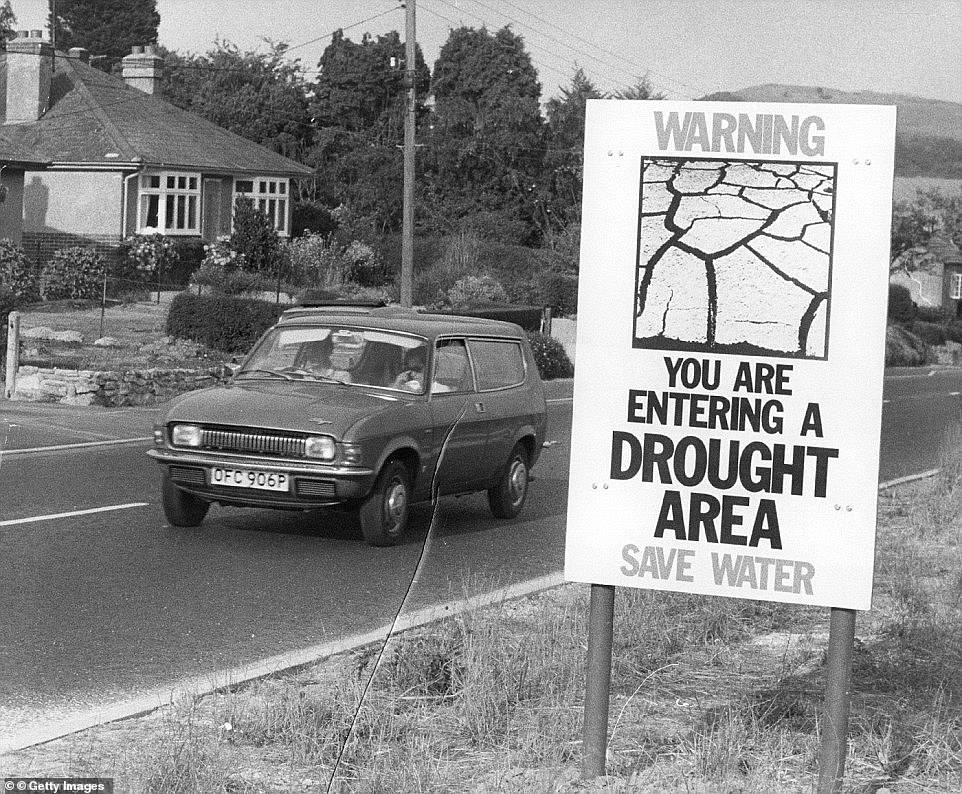 A public information notice warning about the drought, erected by the road in the Bridport area of Dorset. The drought was worsened by the fact that there had been a lack of rainfall the previous summer

The summer of 1976 was caused in part by very hot air that had originated in the Mediterranean. The warm weather and lack of rain began on June 23 and did not abate for more than a month.

The highest temperature recorded in the summer was on July 3, when the mercury hit 96.6F (35.9C) in Cheltenham. The average maximum daily temperature was 67.8F (19.9C).

Photographs from the period show the impact that the heat had.

In one, residents were seen queuing with buckets to get water from stand pipes in Devon.

In another a model was photographed sunning herself on the dried-up basin of Pitsford reservoir.

Another showed some of the thousands of people who flocked to Brighton beach in East Sussex to sunbathe.

Like with this year’s heat, the weather caused wildfires around the country, including in Epping Forest in Essex and Bellerby Moor in North Yorkshire.

Back then, knowledge about the dangers posed by the sun’s rays to people’s skin was not as extensive as it is now. It meant Britons took fewer precautions to protect themselves. 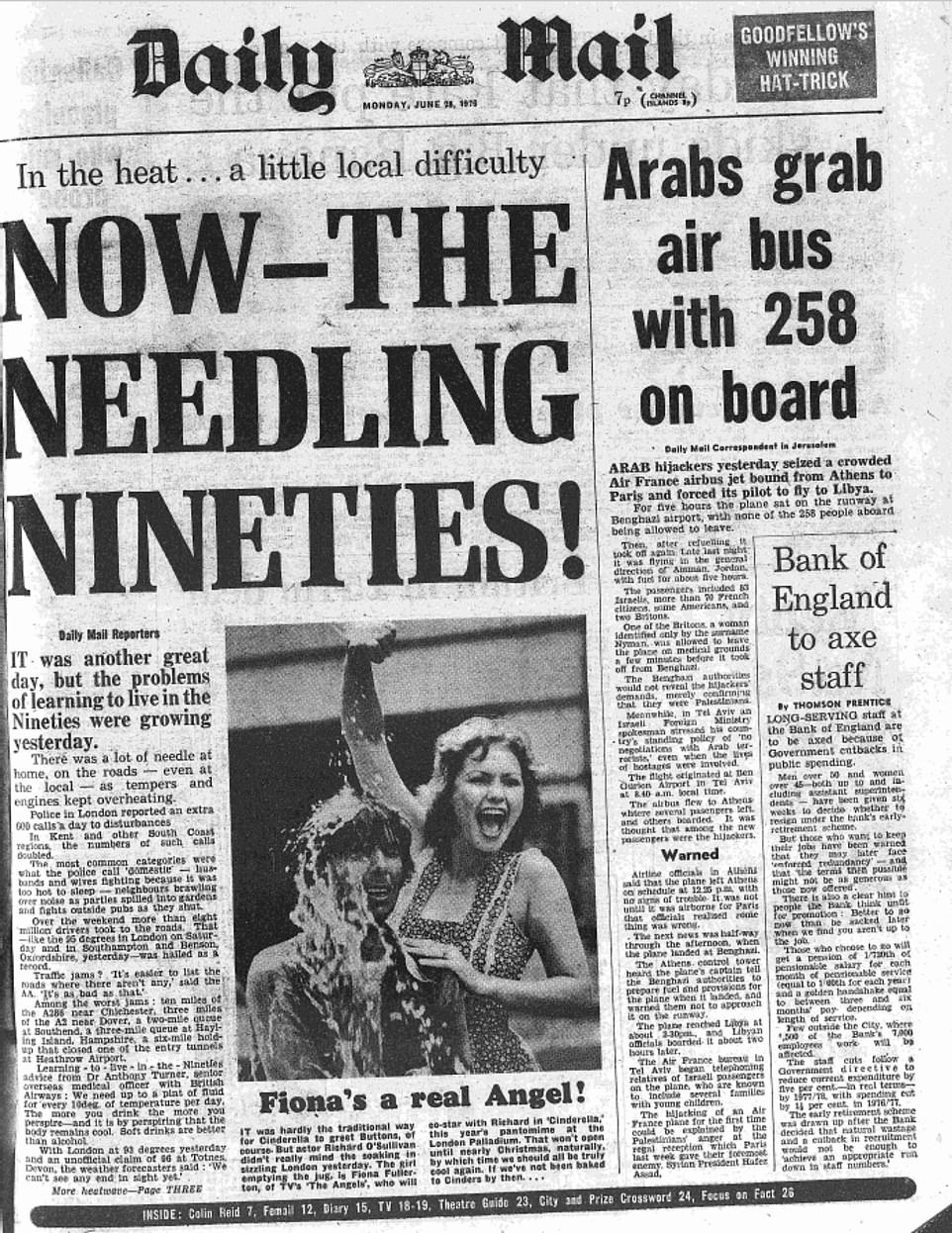 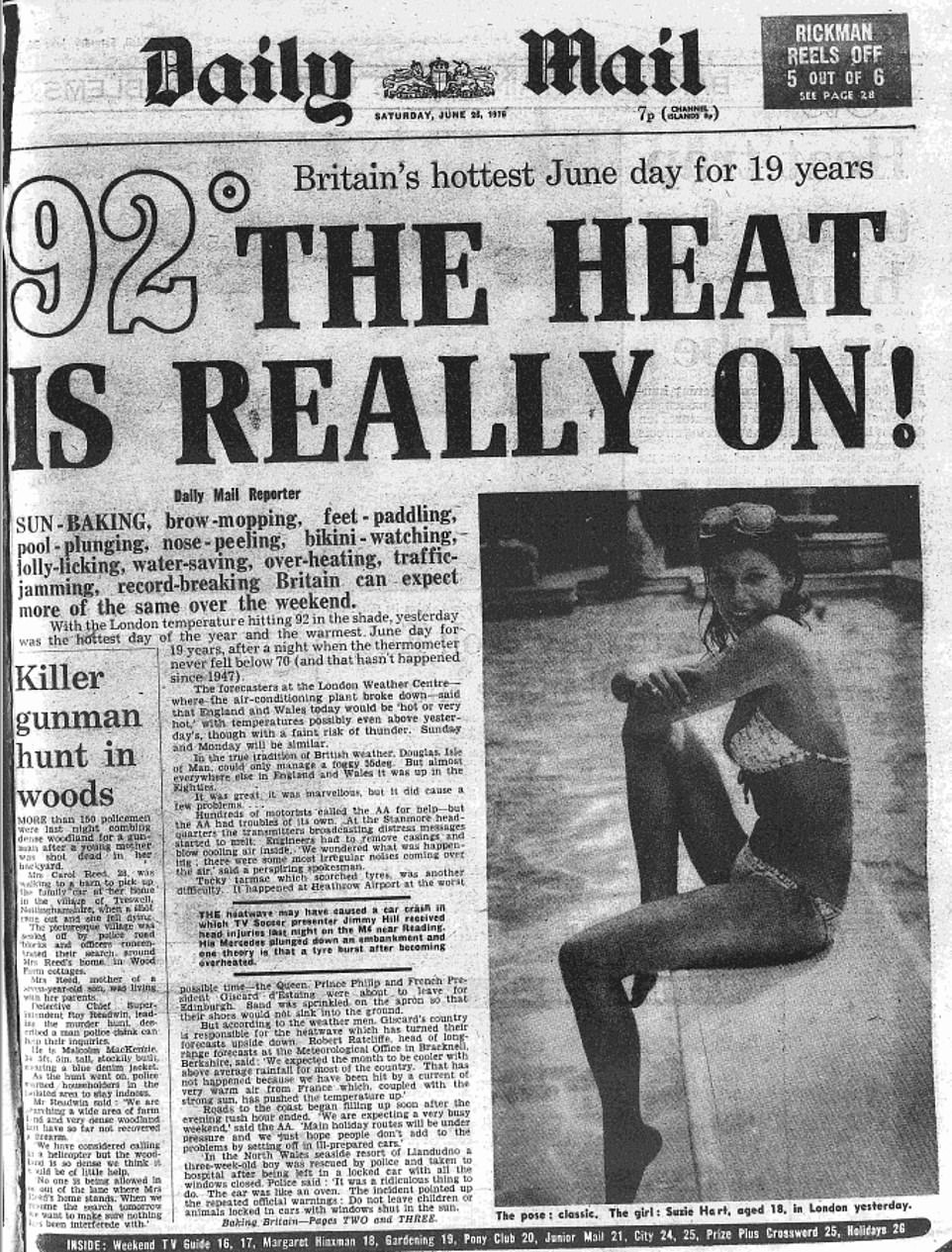 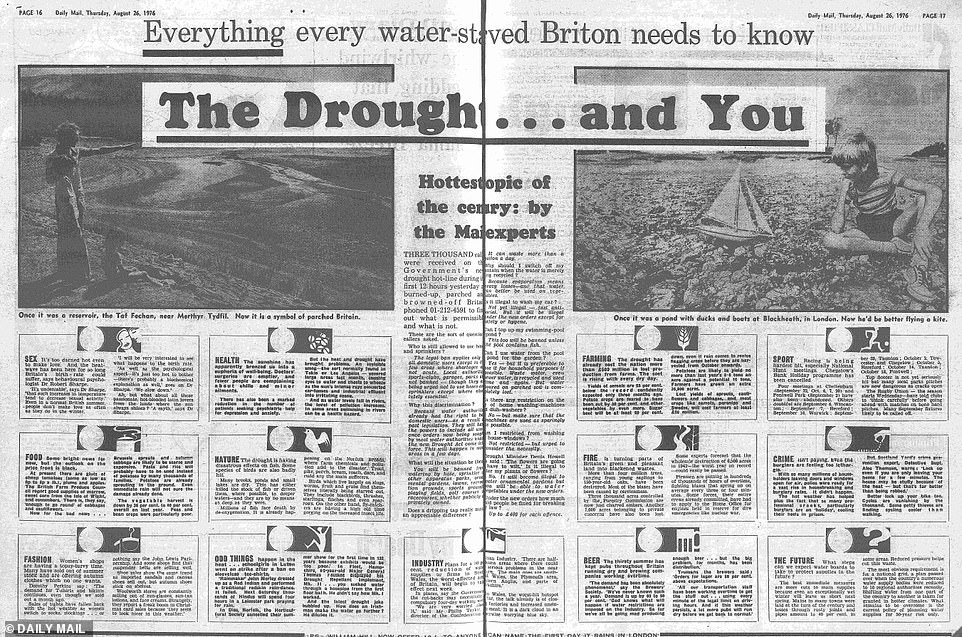 At the Wimbledon championships, where Bjorn Borg would go on to win the first of his five titles and a young Sue Barker made it to the quarter-finals, 400 people were treated for ‘exposure to the sun’ in a single day.

The conditions were what prompted officials to relax the strict dress code for umpires for the first time since the tournament began nearly 100 years earlier. 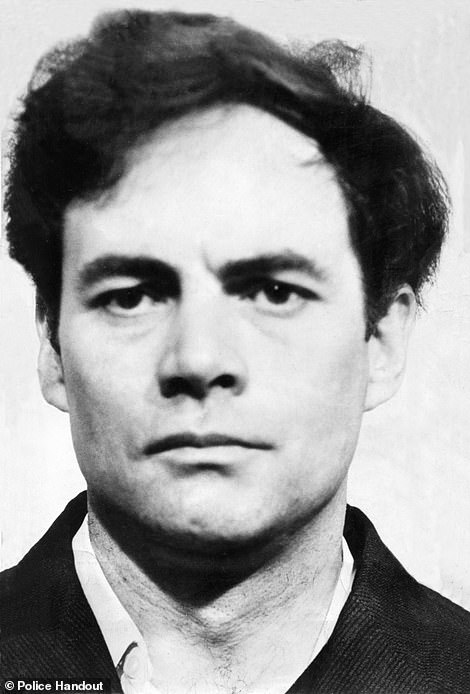 The trial of kidnapper Donald Nielson, who was nicknamed the Black Panther and was accused of murdering a 17-year-old woman, had to be suspended at Oxford Crown Court when a woman in the public gallery feinted

In the House of Commons, bar staff walked out in protest when officials refused to allow a similar relaxation in costume rules that would have allowed them to remove their traditional green jackets.

Above them, the Big Ben clock on what is now named the Elizabeth Tower suffered what was its only major breakdown due to metal fatigue caused by the heat. It took three weeks for the clock to be fixed.

Elsewhere, dozens of people desperately dived into the water of Trafalgar Square’s fountains in an attempt to cool off.

As well as the weight loss seen in the football match between Manchester City and Aston Villa, the Metropolitan Police dealt with 600 more daily calls to domestic disturbances than normal.

As the drought worsened, a strict hosepipe ban was imposed in most places and residents were encouraged to alert the authorities if their neighbours used any water unnecessarily.

Showers instead of baths were encouraged, with the latter only allowed if there was no more than 5inches of water in the tub.

The drought was worsened by the fact that there had been a lack of rainfall the previous summer, meaning reservoirs and rivers were already low.

The lack of water prompted fires to break out. As well as blazes in Essex and Yorkshire, 300 residents in an old people’s home in the New Forest had to be evacuated when a wild fire took hold nearby.

Farmers struggled too as thousands of acres of crops failed, prompting concerns that there would be huge increases in the price of food.

Street traders in London’s Hyde Park were slammed for charging the grossly inflated price of 40p for a bottle of Coca-Cola, even though they were costing 22p in the Dorchester Hotel across the road.

The weather also caused problems for couples, prompting a newspaper to give them advice on how to keep cool in the bedroom.

The drought became so severe that the then Labour government, led by James Callaghan, considered getting water by tanker from Norway.

Legislation – the Drought Act of 1976 – was passed in rapid time to both impose a nationwide hosepipe ban and to grant the government emergency powers that allowed them to reduce or turn off water supplies to industry.

The then sports minister, Dennis Howell, was made the new minister for drought.

In Wales, the mains water supply was switched off for up to 17 hours a day.

Each standpipe – an outdoor tap installed on streets – that people had to use was shared between 20 homes.

By late August, there were only 90 days’ of water supply left in London. In Leeds, the figure was 80.

It prompted t-shirt manufacturers to start selling clothes bearing the slogan: ‘Save Water – Bath With A Friend’.

Thanks to the dry reservoirs and sections of rivers, fish died in their thousands, whilst birds died of botulism – a disease caused by stagnant, de-oxygenated water.

The heat also caused an invasion of ladybirds, with their numbers so high that they were often unavoidably crushed underfoot.

The heat on stricken trains on the London Underground became so severe that people took to smashing train windows.

The trial of kidnapper Donald Nielson, who was nicknamed the Black Panther and was accused of murdering a 17-year-old woman, had to be suspended at Oxford Crown Court when a woman in the public gallery feinted.

However, a week after Mr Howell’s appointment in late August as minister for drought, the rain finally arrived and the hottest and driest days of Britain’s most famous summer were finally at an end.  It had been the worst drought in England in 250 years.

The hot weather of the past few weeks has prompted many Britons to draw on their memories of the summer of 1976.

On Twitter, one wrote: ‘I’m a survivor of the summer of 1976. What a time to be alive. It was amazing. I was 15 and the No government as I remember instructed me in how to behave.’

Another said: ‘I have no idea how so many of us got through summer of 1976, unscathed. We didn’t have social media to try to frighten the life out of us.’

A third wrote: ‘A few hot days in July and they’re trying to pretend this weather is somehow unusual. Anyone else remember the summer of 1976, when we had comparable temperatures to now, except it went on for more than two months rather than the usual week or two? This is *not* an emergency!’

Their comments came as Downing Street called the week’s second Cobra meeting on the heatwave, with temperatures set to rise up to 39C (102F) from Monday.

Rivers are at 30 per cent of normal levels, farmers are using a third more water and Britons have been told to take shorter showers after the lowest rainfall in more than a quarter of a century in parts of the UK.

Farmers warned today of a ‘significant challenge’ posed by the extremely dry weather as they try to keep crops fully watered in the face of rising fuel, electricity and fertiliser costs during the heatwave gripping Britain.

East Anglia is particularly parched this summer after it saw just two thirds of its normal rainfall in the first half of 2022, making it the region’s driest six-month period since 1996 and the 11th driest since records began in 1836. 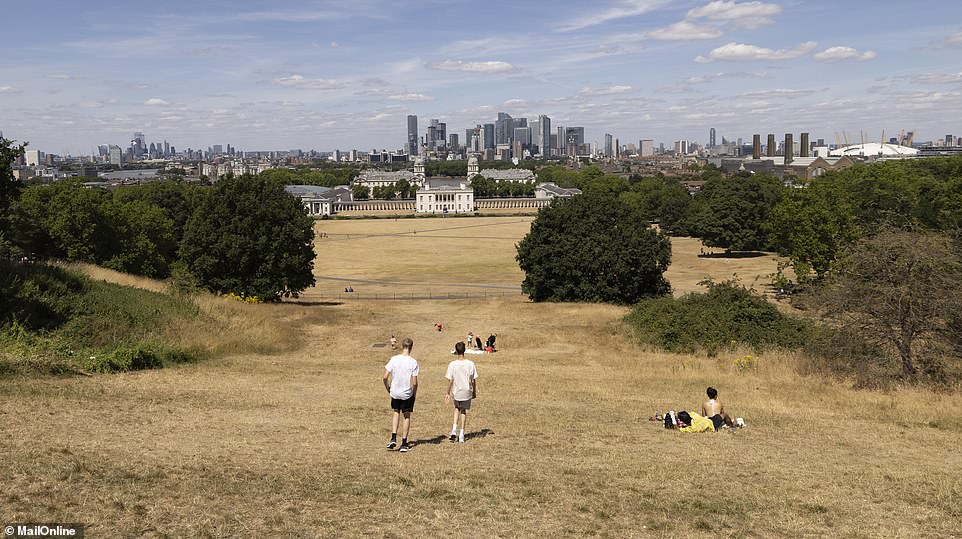 Some rivers in the area are drying out – such as the River Waveney which is at only 30 per cent of its normal flow – while millions of households in Yorkshire have been urged to cut water use or face the prospect of a hosepipe ban.

The Environment Agency has classified the Waveney’s flow rate as ‘exceptionally low’, while the River Great Ouse in Ely, Cambridgeshire; the River Yare in Norfolk; and the Little Ouse in Thetford are all now labelled ‘notably low’.

Yorkshire Water has said it cannot rule out a hosepipe ban and is urging residents to spend at least one minute less having a shower – suggesting singing Bon Jovi’s Livin’ On A Prayer to reduce their time to four minutes.

One farmer on the Norfolk/Suffolk border said he would normally budget £80,000 for electricity to pump water around his crop fields, and this had already gone up to £250,000 this season. But this is now set to increase to £300,000 because of an extra 25 to 30 per cent of water that he is having to pump due to the very dry weather.

Yesterday, the Met Office extended its extreme heat warning to last from Sunday until the end of next Tuesday for most of England and Wales amid warnings of chaos on transport networks and in the NHS and other services.

But there will be some temporary respite, with today set to be the first day since July 9 that temperatures have not got to at least 30C (86F) in the UK, with highs of 27C (81F) to 29C (84F) expected between today and Saturday.

However the amber warning then begins at midnight on Saturday night, with highs of 33C (91F) forecast on Sunday before the peak of the heat on Monday and Tuesday when up to 39C (102F) is expected in London.

The Met Office confirmed today that ‘exceptional heat is possible for southern and central areas of the UK late this weekend and early next week, with temperatures likely in excess of 35C (95F) in some places’.