London: Since leaving the royal family, the Duke and Duchess of Sussex have preferred to appear as a pair. “We’re like salt and pepper,” Meghan opined in an interview. “We always move together.”

Recent months have seen the couple release Harry & Meghan their six-part Netflix documentary series, followed by a joint, high-profile appearance at a glitzy event in New York where they accepted a human rights award. 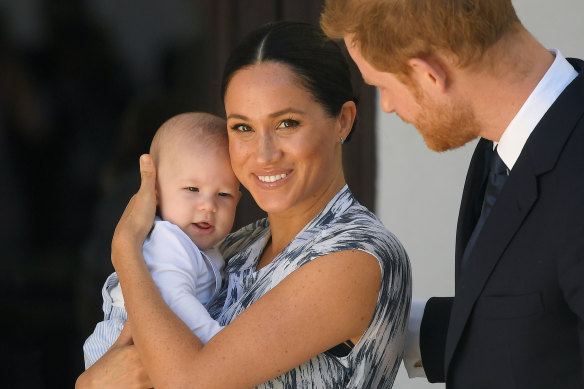 Prince Harry, Duke of Sussex and Meghan, Duchess of Sussex and their baby son Archie during a tour of South Africa in 2019.Credit:Getty Images

Even when projects have been helmed by the Duchess, such as her Archetypes podcast, which was accompanied by wide-ranging interviews with The Cut magazine and Variety, Prince Harry has popped up in a supporting role.

Whether making a cameo appearance during her conversation with Serena Williams, juggling at the window in her 40th birthday video or joining children at a New York school when she was promoting her own book, The Bench, Harry has always been on hand to lend his name to his wife’s endeavours.

He joined her for the second half of the Oprah Winfrey interview and “appeared from somewhere in the house” to tell the journalist from The Cut that Meghan had complained after her photoshoot that she was a mum not a model. “You can be both,” he said.

Similarly, the Duchess popped up in Harry’s Apple TV+ series about mental health and a promotional video for the Invictus Games. 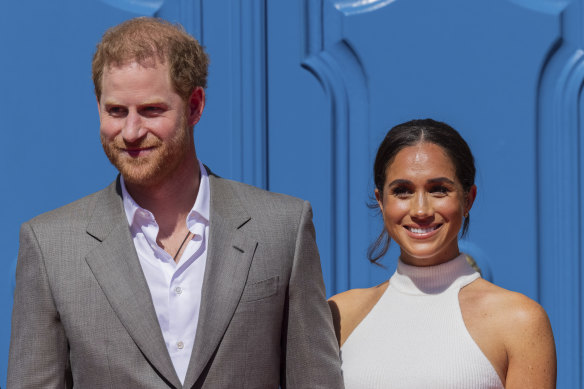 Prince Harry and Meghan, Duchess of Sussex, visit Duesseldorf, Germany, in September ahead of this year’s Invictus games.Credit:AP

But, since Christmas, Harry has been left to soak up the limelight alone.

As he embarked on a publicity blitz this month to promote Spare, his memoir, Meghan has remained below the radar – sending a clear message: This is Harry’s project, not mine.

As with anything to do with the Sussexes, there has been much sniping and speculation online about the Duchess’s perceived influence.

The book has Meghan’s fingerprints all over it, some have claimed, her voice throughout is unmistakable, she is the puppetmaster pulling the strings.

But she was not quite the driving force behind the project that many have assumed.

Sources suggest media-savvy Meghan was more circumspect about the concept of a memoir and may have raised gentle concerns about whether it was the right move.

No stranger to taking on her enemies, she is understood to have been more wary than the Duke about his project.

Harry, burning with resentment towards his father, his brother and the press, was fuelled by a bitter determination to right the wrongs of his past, but his wife took a broader view.

But once Harry had made up his mind and embarked on the two-year process with ghostwriter JR Moehringer, the Duchess is said to have offered her full support and is immensely proud of his achievements.

“Is this the way she would have approached things? Possibly not,” said one source. “But she will always back him and would never have got involved in promoting such a personal project.

“This was about his own life, his own journey and his own perspective.”

Harry has made no secret of his hope that he will jolt his family into a reaction, to contact him, to apologise and to lay the foundations for reconciliation.

He made clear in the introduction that it had been written as an elaborate explanation for King Charles III and the Prince of Wales about his state of mind, his personal hurt and the anger that had built up over decades.

They did not even know why he had fled to California, he revealed.

“And maybe they never really did. And to be fair, maybe I didn’t either.

In the many interviews Harry gave to promote the book, Meghan has remained holed up at their Montecito home. One source close to the Sussexes noted that if she had been involved in any aspect of promoting the book, she would have been accused of trying to steal the limelight.

Perhaps, some suggest, she feels she has nothing to gain having already spoken to Oprah Winfrey.

She has also let it be known that she kept a diary when she was a working royal and has “a lot to say, until I don’t”, as she told The Cut last summer, words interpreted by some as a thinly veiled threat to the royal family.

“It takes a lot of effort to forgive. I’ve really made an active effort, especially knowing that I can say anything,” she added.

Meghan may back her husband in seeking peace with his family, but for her, they represent a miserable chapter of a life now left far behind.

As such, royal sources have indicated that they think it unlikely she will attend the King’s coronation at Westminster Abbey on May 6.

The book has hit the couple’s popularity, with approval ratings falling on both sides of the pond.

Harry and Meghan have, for now, retreated into the shadows as they take stock. But when they do re-emerge, it will likely be together, just like those salt and pepper pots.