Windsor: Prince Harry walked with Prince William after their grandfather’s funeral, talking with
his brother and William’s wife Kate.

The princes chatted as they walked out of St George’s Chapel following the service. 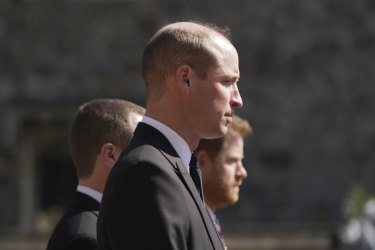 Prince William, Peter Phillips and Prince Harry walk in the procession, ahead of Prince Philip’s coffin.Credit:

The reunion came after the so-called feuding brothers were separated by their cousin Peter Phillips as they walked behind the Duke of Edinburgh’s coffin.

Harry was initially seen speaking to his sister-in-law Kate Middleton as they left the chapel and began walking, but then she appeared to hang back so he could talk to William for a few moments without her.