THE chaotic Handsworth Parish Council meeting that saw the chairman unceremoniously booted off a Zoom call has sparked a flurry of hilarious memes. 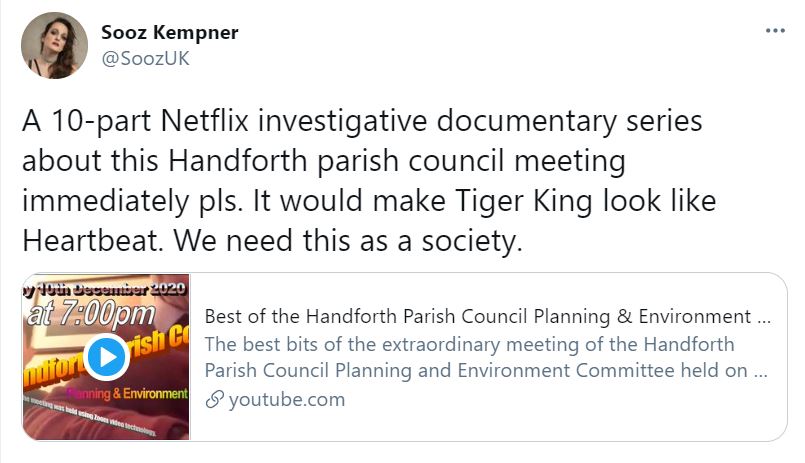 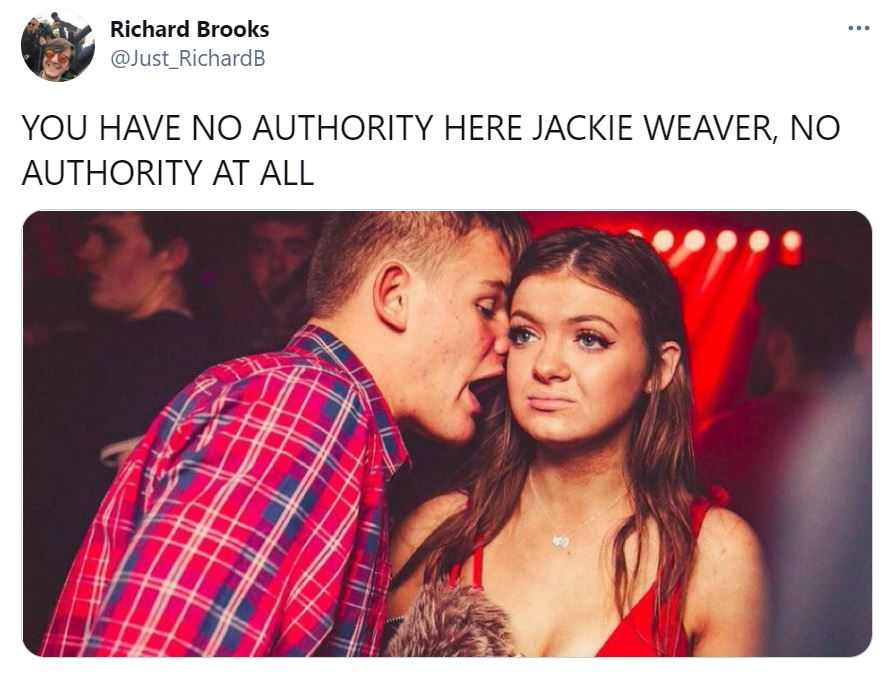 Footage of the hapless Zoom quickly spread on social media with people comparing the clips to an episode of The Thick of It.

In the footage, Chairman Brian Tolver lashed out at clerk Jackie Weaver – who has quickly shot to social media fame – saying “you have no authority" before she chucked him out of the meeting.

Vice-chairman Aled Brewerton then branded the meeting “illegal” before Clerk Jackie asked the group to elect a new chairman.

Enraged Aled then yelled: “No they can't because the vice-chairman is here, I take charge.

“Read the standing orders. Read and understand them.”

The tumultuous meeting has since been viewed more than two million times – which at one point heard an unseen councillor mumbling "f*** off" under their breath.

Speaking to BBC Women's Hour this morning, Ms Weaver, from the Cheshire Association of Local Councils, said for the most part, council meetings were not as dramatic.

But she said: "Clearly, there is amusement in the way someone has lost it.

"It's harsh to take some pleasure from that but I'm afraid when you are being bullied, if you can see that the other person has lost it, there is a sense of 'I did OK there'." 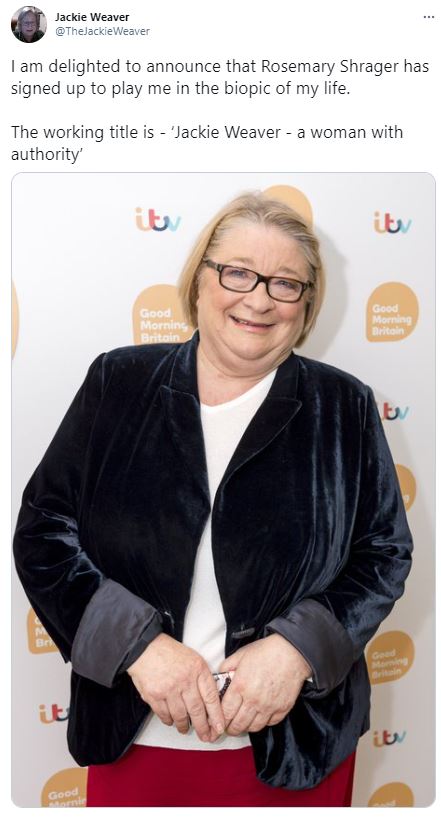 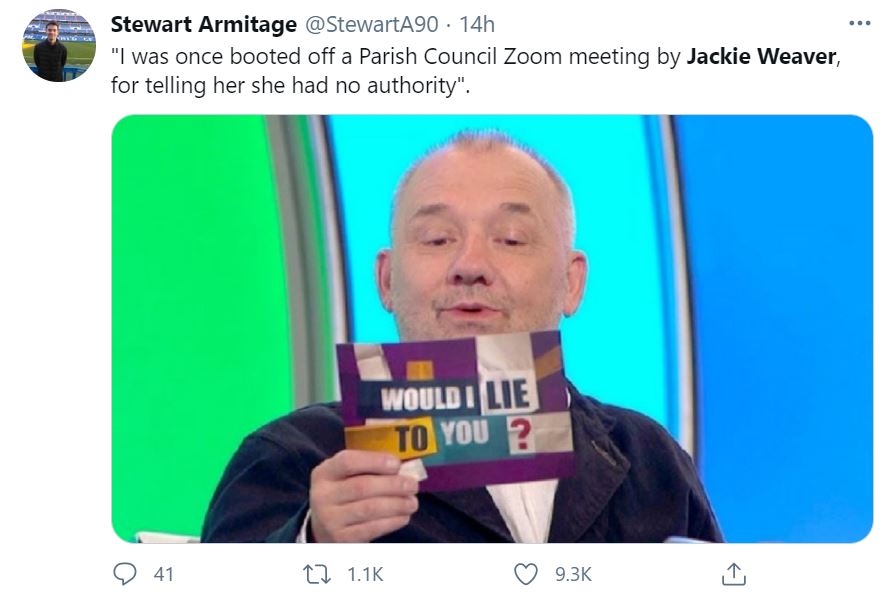 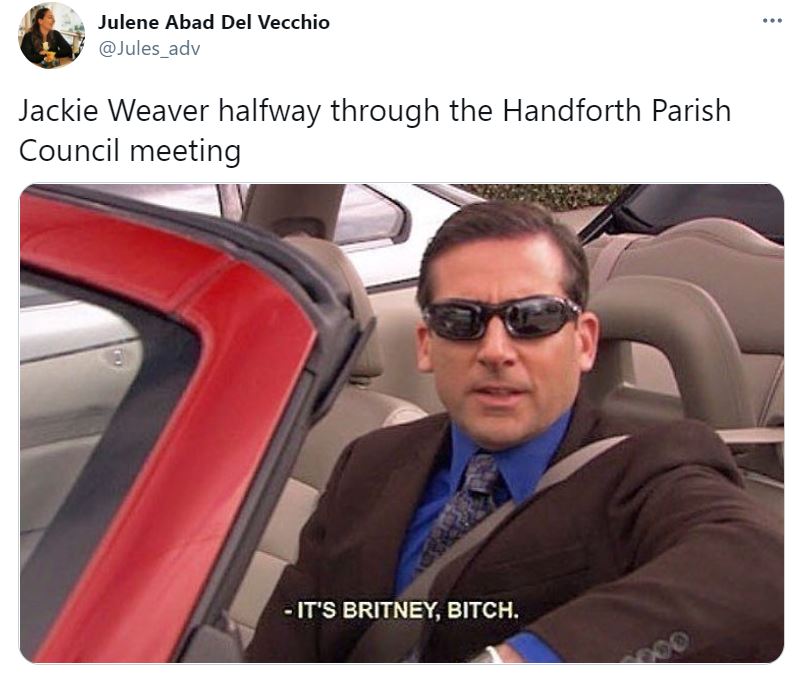 She admitted she wasn't sure who had been in charge of the meeting and she had been there to support the councillors.

And when pressed over how to keep your cool during a testing online meeting, Ms Weaver joked Brits shouldn't wear their pyjamas.

She added: "For me, it's about being focused on what you are trying to achieve."

But Mr Tolver said he did not regret how he acted in the meeting.

He said Ms Weaver – who hosted the Zoom call and removed him from it – was just present as a member of the public and "had no status to speak other than when invited".

"If you look at the first meeting you will see I have reason to be angry," he said.

The video has been shared countless times on Twitter, Facebook and TikTok with Brits bent double at the ludicrous local politics.

Radio One DJ Greg James declared the viral vid "the best British comedy in decades," adding: "YOU HAVE NO AUTHORITY HERE JACKIE WEAVER.

"Please set aside 20mins today to watch the best bits of the Handforth Parish Council Planning and Environment Committee." 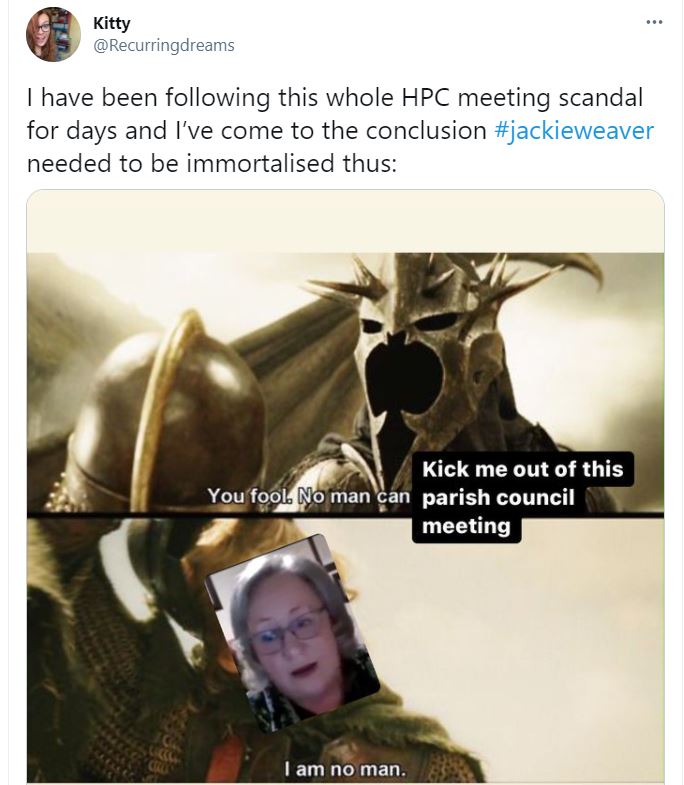 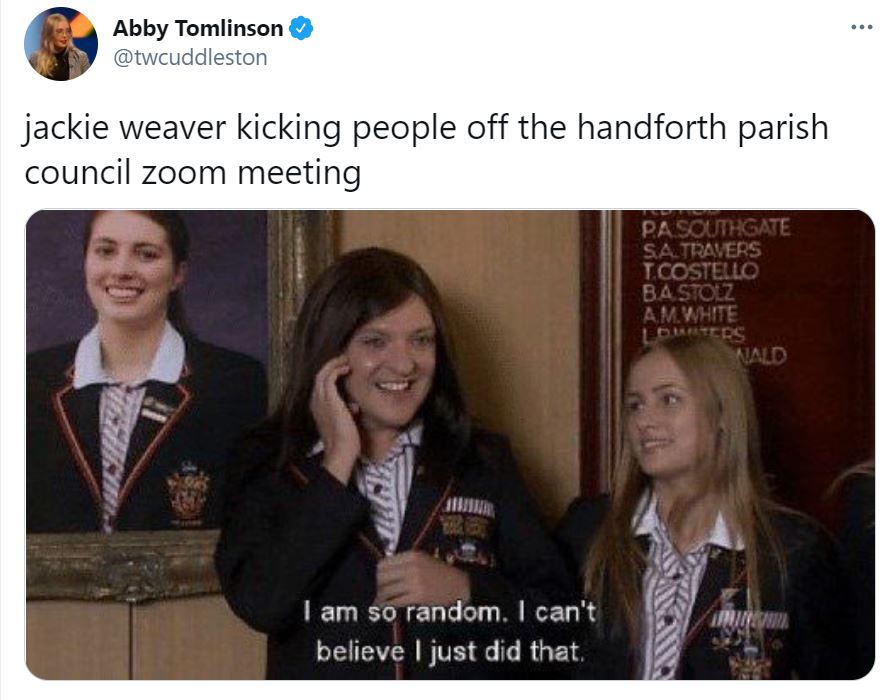 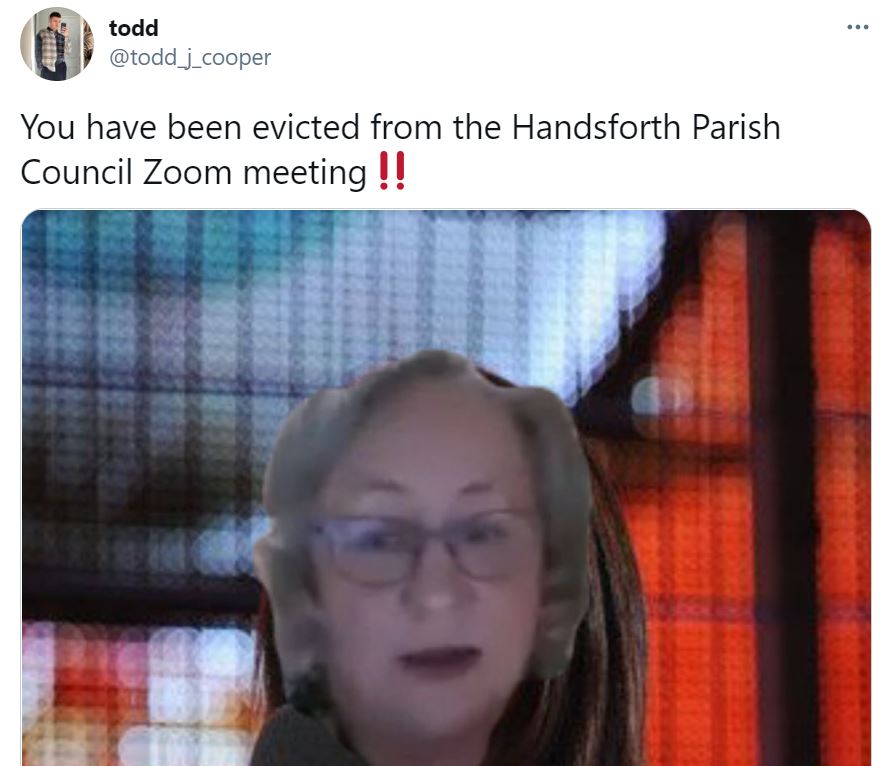 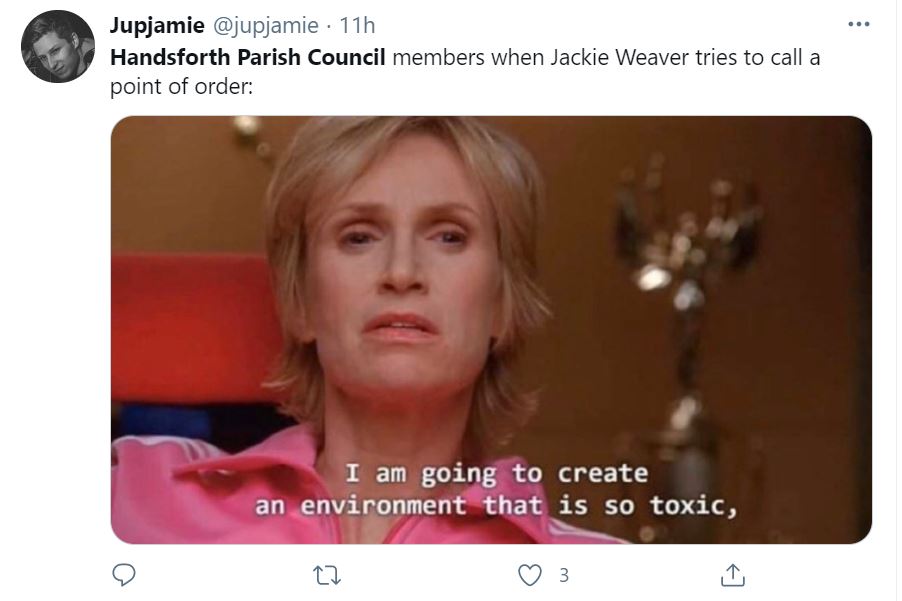 And an account impersonating Ms clerk herself Jackie Weaver tweeted a snap of celebrity cook Rosemary Shrager, writing: "I am delighted to announce that Rosemary Shrager has signed up to play me in the biopic of my life.

"The working title is – ‘Jackie Weaver – a woman with authority."

Keen fans have already designed t-shirts with the slogan: “You have no authority here Jackie Weaver.”

One person commented: “I propose we grant Jackie Weaver emergency powers to form a clone army.”

Another joked: “Sad to think that some people probably get business cards printed saying they're on the Handforth Parish Council Planning and Environment Committee. I have, and I'm not even on it.”

Others tweeted out hilarious mock-ups of the Handsworth Parish Council crew in various films and TV shows, with Lord of the Rings a big favourite as well as Game of Thrones.

Others referenced Glee baddie Coach Sylvester's iconic line: "I am going to create an environment that is so toxic."

A parish council is a local authority that makes decisions on behalf of the people in the parish.

It is the level government closest to the community, with the county and city authority above it in the hierarchy.

The meeting took place in December but the footage only picked up pace online last night. 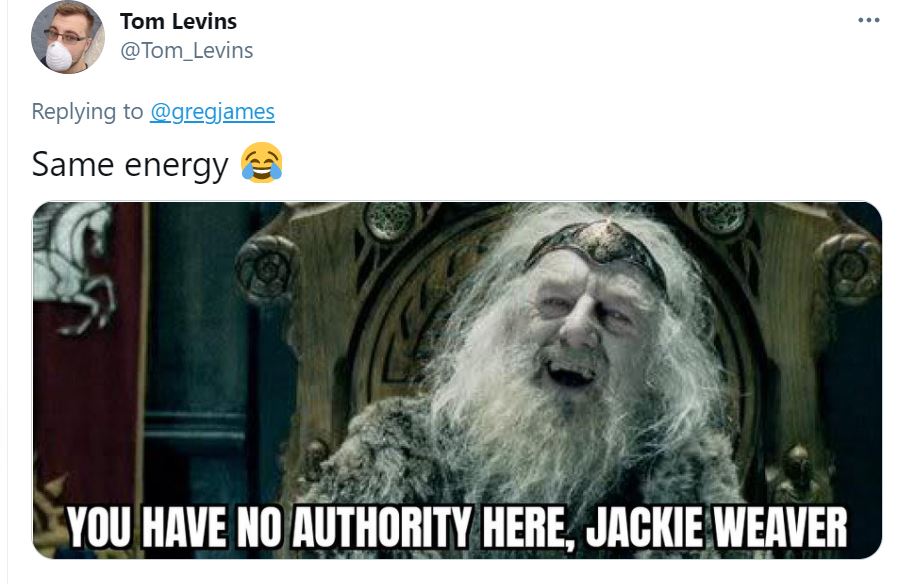