The water near a Massachusetts beach turned red this week after a Great white shark attacked a seal just feet away from the shoreline.

The moment was captured by Corey Nunes on Thursday at Race Point Beach in Provincetown, one of 15 towns that twist around Cape Cod.

The Atlantic White Shark Conservancy shared footage of the video to their Facebook page and cautioned locals to be on the lookout for great white sharks near the coast. 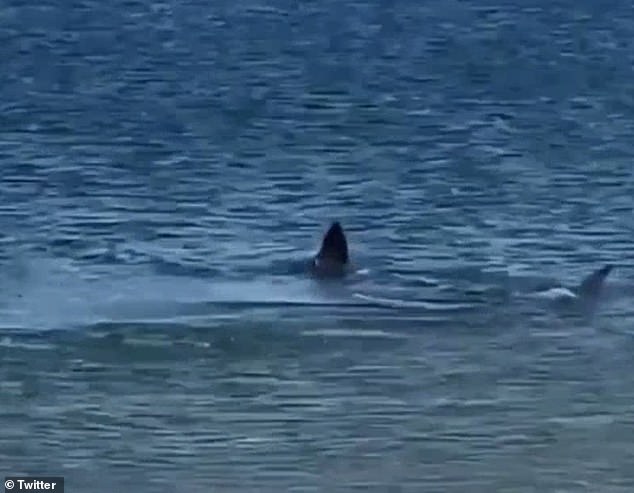 Cell phone footage captured the moment a great white shark swam near the shoreline at Race Point Beach in Provincetown, Massachusetts, for a meal 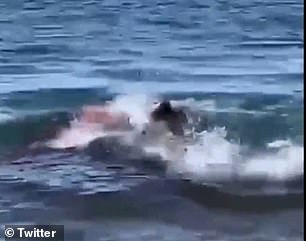 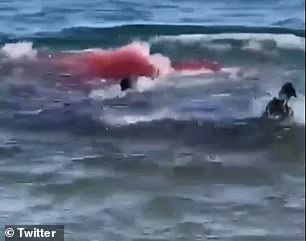 In the video, waves gently roll onto the shoreline when a shark fin suddenly slices through the water and flits across the camera.

‘What the hell is that?’ one witness asks, noticing something in the water. The men soon realize that a lone seal has been corralled by the shark.

The shark begins to thrash in the water, its fins darting in different directions, when the water begins to turn read.

‘This is another good reminder that white sharks hunt in shallow waters off the Cape and, based on tagging data, we know that October is a peak season month for white shark activity off the Cape,’ the Atlantic White Shark Conservancy said.

Massachusetts officials have also warned residents to be vigilant as sightings have increased.

‘Seasonal white shark sightings off the Massachusetts coast have increased in recent years. The Outer Cape is a popular location for white sharks, as a growing population of gray seals live there,’ officials wrote.

The state’s shark program has tagged more than 120 individual white sharks off the eastern coast of Cape Cod since 2009. Researchers found that despite the sharks migrating to the Gulf of Mexico and the Southeast each fall, many of them return.

According to the Atlantic White Shark Conservancy’s app, Sharktivity, there have been at least five shark sightings in the last two days.