New York: Dr Deborah Birx, the Trump administration’s coronavirus response co-ordinator, said on Sunday that crucial statements from the White House about the coronavirus pandemic were shaped by misinformation, denial about the severity of COVID-19 and the shadow of an upcoming election.

In an interview on the CBS program Face the Nation, Birx said that from the outset, progress against the virus was impeded by inconsistent and inept public messaging that played down the gravity of the pandemic and the immediate need for safety precautions. In the White House, she said, “there were people who definitely believed that this was a hoax”. 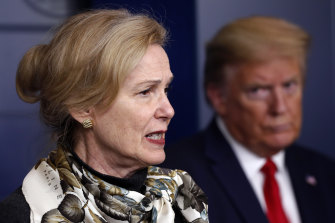 That disbelief in turn was echoed in many pockets across the United States, she said, because at the beginning of the pandemic, public officials did not fully describe the spectrum of disease that the virus could cause.

“And so they saw people get COVID and be fine,” and that bred scepticism, she explained.

Incomplete messaging had devastating consequences, Birx said. While not specifically naming former president Donald Trump, who had initially labelled the pandemic a “hoax,” Birx noted: “Every time a statement was made by a political leader that wasn’t consistent with public health needs, that derailed our response. It is also why I went out on the road, because I wasn’t censored on the road.”

She travelled to several states in the northern summer and autumn, speaking to governors and local officials.

Describing the flow of information to Trump about the virus as chaotic and unco-ordinated, Birx said that to this day, she did not know the source of some of the data he was receiving.

“I saw the president presenting graphs that I never made,” she said.

Last spring, the White House was very focused on the pandemic. But as months passed and the economy continued to sag, she said, the administration routinely ignored her recommendations for “gating criteria” for activities like indoor restaurant dining. As a workaround, she said, she would speak regularly to state governors, repeating her advice.

Former vice-president Mike Pence was aware she was doing so, she said.

Birx came under intense criticism from public health experts for being a part of the Trump apparatus that was promoting misleading, and sometime completely erroneous, information and guidance. She was faulted for not countering Trump’s misinformation on the severity of the pandemic, or his promotion of certain bogus treatments, and for not adequately addressing the conflicting messages and approaches coming from the White House as the virus raged out of control.

“I was not able to do national press,” she said. “The other thing that was very important to me is, I was not going to go outside of the chain of command.“

Birx said that whenever she had a significant disagreement with coronavirus policy and practice announced by the White House, a negative report about that dispute would appear in the media within days.

But over the course of last year, Birx repeatedly declined repeated interview requests made by The New York Times as tensions developed between White House officials and Trump with the nation’s public health officials.

As the pandemic raged in the summer and the election approached, both Birx and Dr Anthony Fauci spoke less frequently in public and were no longer appearing at White House briefings. Trump’s chief adviser in the fall instead became Dr Scott Atlas, a Stanford radiologist who supported the benefits of pursuing herd immunity over imposing lockdowns, and who spoke disparagingly about the widespread use of masks.

Birx said that the only two people in the White House who regularly wore masks were herself and a person on her support staff, and she expressed frustration that the White House believed that the best way to protect the commander in chief from getting sick was to be tested regularly.

Birx, a career civil servant and an immunologist who worked extensively on international AIDS relief, is now a special adviser to the Centre for Global Health at the Centres for Disease Control and Prevention. She said she planned to announce her retirement in four to six weeks.

Tags: ‘Graphs, I, Made, never, Trump’s
You may also like
Celebrities News