The rector of the University of Edinburgh claimed on Twitter that the current Rwandan president had ‘orchestrated’ the genocide against the Rwandan minority Tutsi population.

Lord rector Debora Kayembe has been accused of genocide denial after tweeting in referencing to the UK Government’s plan to send a number of male refugees to the African country.

She said Mr Johnson had ‘reached the bottom of evil’ and ‘the genocide in Rwanda was orchestrated by [President] Kagame’.

The 1994 genocide, where around 800,000 Tutsis were killed in 100 days, is considered to be one of the worst crimes against humanity in history.

Rwandan president Paul Kagame was leader of the Rwandan Patriot Front, which defeated Hutu extremists before he was elected to his current role in 2000.

The university has denied it shared her views and has apologised, with a meeting to be held today of the institution’s supreme governing body on what to do about Ms Kayembe. 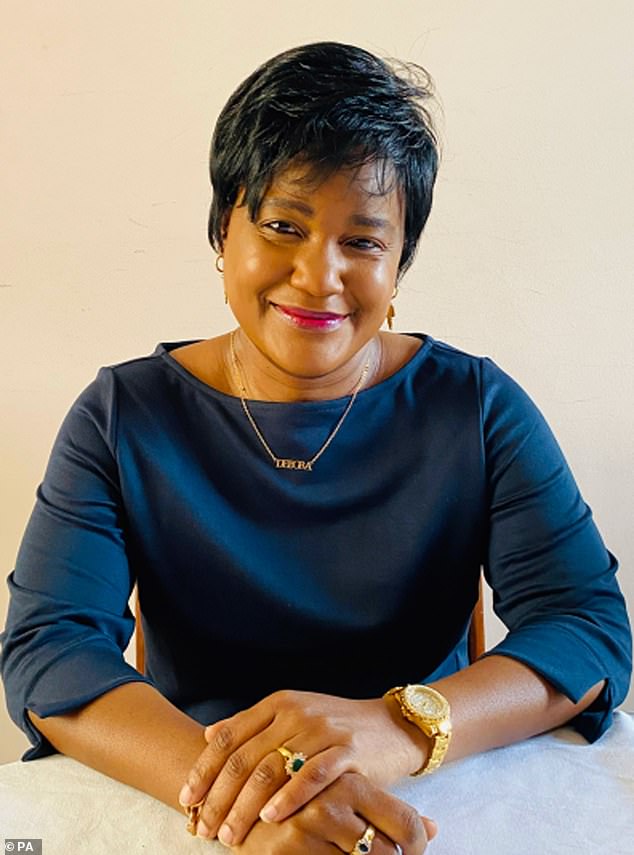 Rector of Edinburgh University, Debora Kayembe, has sparked fury by tweeting that Rwandan president had ‘orchestrated’ 1994 genocide against Tutsi population – prompting an apology from bosses to the African nation 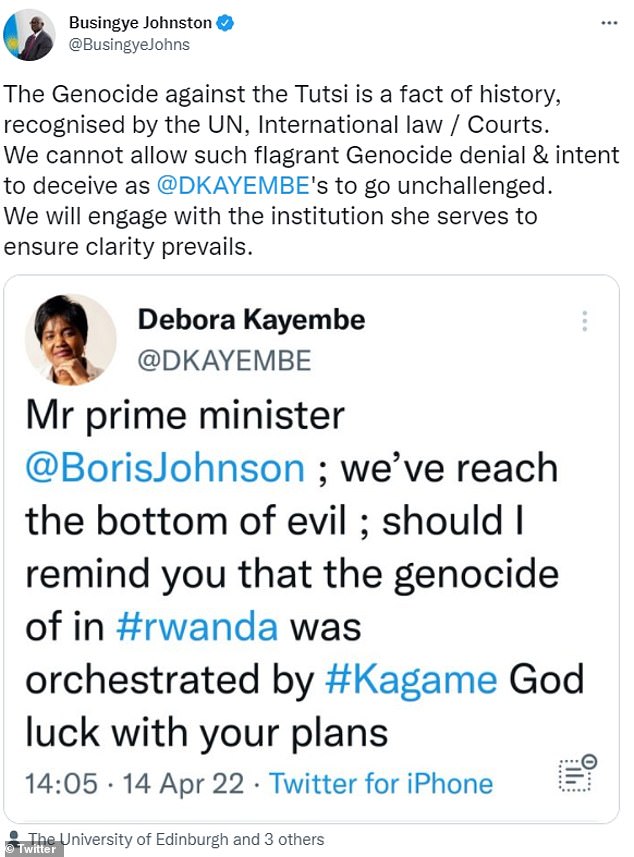 The majority of Rwandans are ethnic Hutus, but the country was ruled by the Tutsi minority for decades until 1959 when the Tutsi monarchy was overthrown.

In 1990, a Tutsi rebel group called the Rwandan Patriotic Front that had formed in Uganda invaded the country.

After several years of guerrilla fighting, a peace deal was signed in 1993 between President Juvénal Habyarimana and RPF leaders.

However, the fragile peace lasted only until the night of April 6, 1994, when a plane carrying Habyarimana and Cyprien Ntaryamira, president of Burundi and a Hutu, was shot down.

The Hutus blamed the RPF for the attack and enacted a ‘final solution’ to rid the country of Tutsis, with militias handed lists of names and told to kill them.

Neighbours turned on each other, husbands murdered their Tutsi wives, and there were even accounts of priests and nuns killing those who sought shelter in churches.

It lasted 100 days and 800,000 Tutsis were killed, alongside thousands of Hutu moderates who objected to the killing.

They were slaughtered by supporters of the Hutu government, who claimed to be ‘weeding out the cockroaches’.

Men, women and children were felled by machetes, grenades and bullets in their homes and on the streets

By July 15, almost 800,000 people had been killed – a massacre which only stopped when the RPF took control of the capital, causing some 2million Hutus who perpetrated the genocide or feared reprisal attacks to flee.

The killings only stopped when the Tutsi-controlled Rwandan Patriotic Front seized control, and put Paul Kagame into power.

The international community, and the UN, were criticised for failing to act, despite warnings from inside the country that genocide was taking place.

In a now-deleted tweet, Ms Kayembe said: ‘Mr prime minister Boris Johnson, we’ve reach the bottom of evil. Should I remind you that the genocide of Rwanda was orchestrated by [president] Kagame. God luck with your plans.’

Peter Mathieson, the principal of the university sent a letter to Rwanda high commissioner to the UK Johnston Busingye, in which he said the institution recognised ‘the hurt caused by the rector’s statements, and the extreme hurt and pernicious destabilisation that genocide denialism can cause to all Rwandans’.

Mr Mathieson wrote: ‘We recognise that the genocide against the Tutsi is a fact of history and represents one of the most appalling crimes against humanity committed in the course of history.

‘We reject outright the notion that President [Paul] Kagame was in any way responsible.

‘In fact, it is historical fact that Paul Kagame led the liberation of Rwanda from the guilty regime.’

Pledging to support the university’s Rwandan community, the principal said individuals would be offered a meeting with the chaplaincy and said that the institution was ‘attending to our many collaborators and partners in Rwanda to reassure them of our position and offer additional support if necessary’.

The university has said the rector’s comments were ‘her personal views’ and that managers were ‘looking at the formal procedures available’.

Mr Mathieson added the matter would be reported to the University Court at a meeting on Monday.

Rwanda’s Mr Busingye also  tweeted out a copy of the letter and accused Ms Kayembe of making comments which ‘spread disinformation about and denial of the genocide against the Tutsi’.

Ms Kayembe, a former board member of the Scottish Refugee Council, was elected rector in 2021 and is the first black person to hold the position.

She was born in the Democratic Republic of the Congo and claimed asylum in the UK in 2005.

Between 7 April and 15 July 1994, almost 800,000 people had been killed – a massacre which only stopped when the RPF – led by Mr Kagame – took control of the capital, causing some two million Hutus who perpetrated the genocide or feared reprisal attacks to flee.

A spokesperson for Edinburgh University said: ‘We do not share Debora Kayembe’s views, which were made in a personal capacity.

‘The University of Edinburgh – in step with the UN, multi-national organisations, and nations all over the world – acknowledges the Genocide against the Tutsi as one of the most appalling crimes against humanity, and rejects outright the notion that the Rwandan government and its sitting President are responsible.

‘At this moment of Kwibuka commemorations in Rwanda, the University stands with the Rwandan people in its remembrance of those who have been lost. 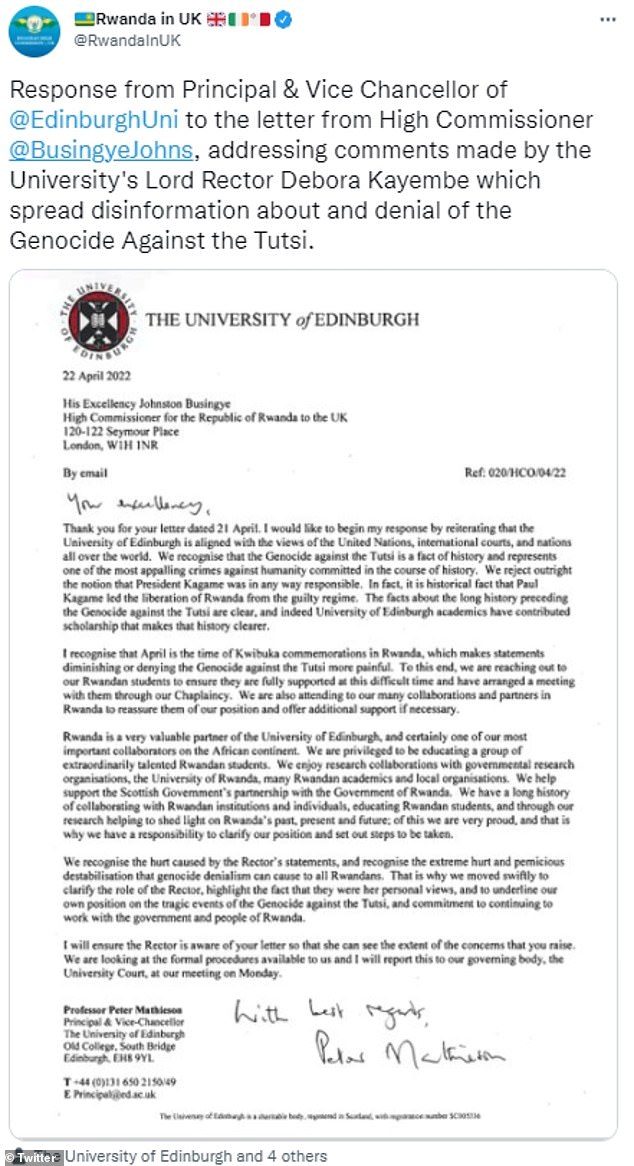 Peter Mathieson, the principal of the university sent a letter to Rwanda high commissioner to the UK Johnston Busingye, in which he said the institution recognised ‘the hurt caused by the rector’s statements, and the extreme hurt and pernicious destabilisation that genocide denialism can cause to all Rwandans’

‘The University acted swiftly to clarify the role of the Rector and to underline the University’s position.

‘We are also reaching out to our Rwandan students to ensure they are fully supported at this difficult time.’