Hundreds of Australian diplomats, business people and their families are fleeing Malaysia as pollution from Indonesian forest fires claims a growing human and environmental toll. 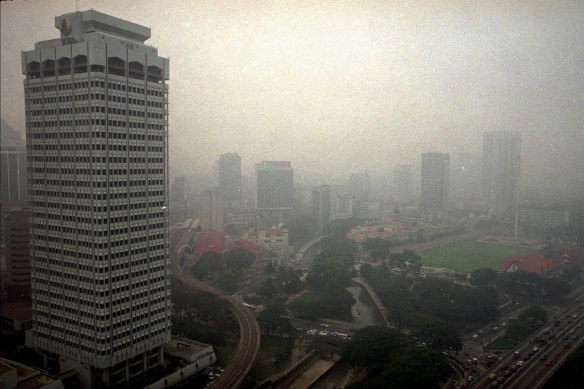 The Australian high commission in Kuala Lumpur will this week begin evacuating diplomats’ families and sending non-essential staff on temporary leave to Australia.

BHP and other Australian companies with operations there are also sending home many employees and their families.

Choking smog has blanketed the Malaysian capital for two months.

A planned visit by the Deputy Prime Minister, Mr Tim Fischer, to the RAAF’s Butterworth airbase in Malaysia in mid-October is in doubt.

The Defence Department is paying for flights to bring home the families of 50 permanent RAAF personnel stationed there, but service personnel will stay.

Many of the high commission’s 120 staff and dependants have sought medical treatment for respiratory and eye problems. Four people have already returned to Australia. 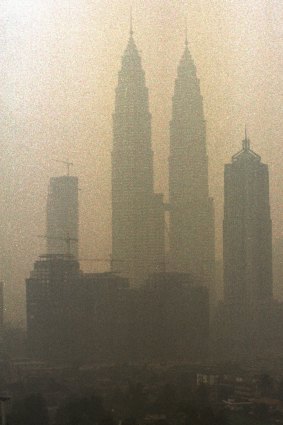 “It’s like living in a science fiction movie and everybody needs a break,” the high commissioner, Mr Robert Cotton, said yesterday.

“Every day you get up and there is no sun —just this thick, dirty, brown smog filling the air. You can’t move around outside without face masks and it’s affecting people’s health and their morale.”

The pall of pollution stretches across six nations and has forced thousands of people to seek hospital treatment.

In Singapore, airline bookings have jumped substantially as residents flee for clearer skies.

Poor visibility caused by forest fires burning out of control on the Indonesian island of Sumatra is suspected of contributing to Friday’s crash of a Garuda jet near Medan. All 234 passengers and crew died.

Twenty-eight crew members are missing, believed dead, after an Indian freighter collided with another cargo ship in heavy smog in the Strait of Malacca on Friday. It was the second collision there inside a week.

The United Nations’ Department of Humanitarian Affairs has sent a disaster evaluation team to the region.

A report by the World Health Organisation has warned of a sharply rising toll from continued exposure to high levels of pollution, particularly among people with heart and lung problems, infants and the elderly.

In Kuala Lumpur, which has had no rain for 10 days, readings on the local air pollution monitoring index have ranged above 200 points for most of the past week — levels regarded as “very unhealthy”.

Mr Cotton said the high commission had issued face masks to all employees and would this week begin flying diplomats and their families back to Australia on a “rotational basis”.

He said most Australian companies in Kuala Lumpur were also giving staff the option of taking early leave.

“No one can predict how long this will last, but I’m telling staff and Australian residents here that they need to be prepared for this to go on for at least another month before the monsoon rains come,” he said.

The Department of Foreign Affairs last week issued an alert warning Australians to defer travel to Malaysia, Brunei or parts of Indonesia if they are pregnant, suffer an illness or are taking young children.

The advice said that all non-essential travel to the Malaysian state of Sarawak, on Borneo, should be deferred.

The Australian Greens Senator Bob Brown said in Adelaide yesterday that the smog was “another warning to the world of impending environmental catastrophe”.