12 May — Jamaican reggae singer Bob Marley, died of cancer at the Cedars of Lebanon Hospital yesterday. He was 36.

Marley, whose group Bob Marley and the Wailers was the world’s best-known reggae band, flew to Miami from Germany last week. He had been receiving treatment in Bavaria for the past five months. 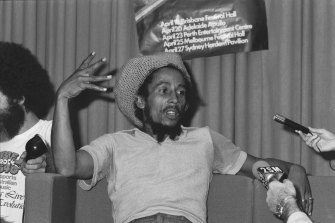 Born in Jamaica in 1945, the son of an English army captain and a Jamaican woman, he made his first record, a single called `One Cup of Coffee’ in 1962, after reggae musician. Jimmy Cliff introduced him to a local promoter.

The Wailers, which started with five members, was formed two years later. Their first record, ‘Simmer Down’, was a hit in Jamaica.

In the seventies, ‘Marley made successful tours of Britain, America and Australia, becoming the first Jamaican artist to make a breakthrough in those countries.

He was a Rastafarian, a sect devoted to the return of Jamaicans to their African homeland. He wore his uncut hair in braided “dreadlocks” and smoked quantities of marijuana, both symbols of his faith. 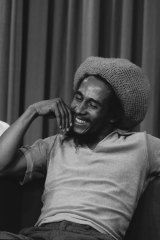 Bob Marley: not just who, but why?

BOB MARLEY had much in common with John Lennon. Like the Beatle who died a few months before him, Marley the reggae musician had to cope with an outside world which essentially could not understand him or his doctrine.

It will probably be quite some time, if at all, before history recognises this funny little man, with his hair matted in bouncing “dreadlocks” as something more than a weird pot-smoking cultural artifact.

Marley was treated as an exotic product of the Third World and sniggered at behind his back. In truth, he was a musical force that made him the equal of politicians and prime ministers —at least in his own country of Jamaica. He proved that politics, music and religion not only mix very well but, given the right volatile compounds, can produce an explosive wave of cultural change.

It was the intensely political nature of his music that gave Marley his unique power — a power that did not go unnoticed by Jamaica’s professional politicians.

In a country where 50 per cent of the population over the age of 15 is functionally illiterate, reggae music had become the only medium capable of carrying information to the people.

One reliable way to find out what people in Jamaica are thinking is to listen to the Top Ten. Former Prime Minister Michael Manley learned this very quickly. “Reggae musicians reflect public attitudes much more accurately than a political machine,” he once said. “A reggae song has a tremendous effect on the pace of political change.”

In fact, Manley admits that his election as Prime Minister in 1972 was due at least partly to his decision to record `Better Must Come’, his own number one reggae hit. Shrewdly, Manley courted Marley, enlisting his influence over reggae followers.

Jamaica’s present Prime Minister, Edward Seaga, took longer to realise reggae’s significance. But during the 1977 elections, he too recognised that a political force as powerful as reggae could not be ignored — and built his election campaign around a reggae song called ‘Turn Them Back’. 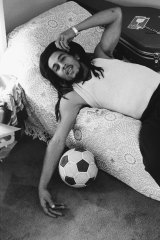 Passion: Bob Marley loved the world game so much he was buried with a football.Credit:Magnolia Pictures.

Born at St Ann on Jamaica’s north coast in 1945, Marley began his musical career at the age of 14. He grew up in Trenchtown, the notorious slum ghetto of Kingston, Jamaica’s largest city. There, stirred by American radio from Miami, Marley and other musicians started mixing “the blues” with calypso-steel rhythms. The result was ska, the origin of reggae.

In 1964 Marley and his band, The Wailers, began recording. Before long they had joined the Beatles and Rolling Stones at the top of Jamaica’s hit charts. Then, with careful management and an acute ear for the so-called “international sound”, Marley successfully carried his music to the rest of the world during 1970s. He was the first reggae musician to gain a consistent audience in Western countries and remained to his death the most successful in commercial terms.

But as Marley’s popularity grew, so did the controversy surrounding the intense political nature of his finely produced albums. Such songs as ‘Burn-in’ and Lootin’ with its graphic images of curfews, fire, arson and uniformed jailers combined social outcry with the images of romantic protest. Or take his chilling recollection of Jamaica’s past:

The tables are turning

Everytime I hear the crack of the whip

My blood run cold I do remember on a slave ship

How they brutalised my very soul.

Nor did Marley hide his fear of political destabalisation from America:

Don’t involve no Rasta in your say

Rasta don’t work for no CIA.

So it really came as no surprise when political violence finally caught up with Marley during the 1977 elections. More than 200 people died from “political causes”; Marley himself was gunned down, apparently by supporters of the right-leaning Jamaican National Party. One bullet grazed his chest, another passed through his arm. Two days later, his hand heavily bandaged, Marley played before 85,000 people and called both Manley and opposition leader Edward Seaga on stage in a gesture of peace.

But it would be misleading to suggest that overtly political themes ran through all Marley’s music. Many of his songs were lilting love ballads; many others were social observations, not incendiary calls to arms.

Of course Marley’s fusion of reggae and politics can’t properly be understood without considering its underlying element — the Rastafari religion. The origins of the Rasta faith can be traced to the 17th century when a large group of slaves calling themselves ’The Maroons” took to the hills of Jamaica, establishing isolated communities which to this day still claim allegiance to Africa.

The Rasta faith is partly based on the ideas of a Jamaican national hero, Marcus Garvey, who swept among the urban poor and depressed rural blacks in the 1920s, advocating a return to their ancestral roots in Africa. No sooner had Garvey predicted that a black king would be crowned in Africa than in 1930, Haile Selassie became emperor of Ethiopia. His tribal name was Ras Tafari. This explains the reverence in which members of the sect held the Ethiopian monarch while he was on the throne.

During the next 20 years the Rasta doctrine developed as a unique mixture of Biblical allegory and contemporary social analysis. Rastas came to see themselves as black Hebrews — outcasts awaiting repatriation to Africa. They rejected the established Christian Church, believing it was an abomination of the true teachings of the Bible. Instead they preach a non-materialist and egalitarian doctrine more suited to their own lives.

Another important ingredient of their philosophy — and perhaps the most controversial one — is marijuana. To the Rastas, it is a holy herb ordained by a fairly liberal interpretation of Genesis 8, Psalm 18. But to other Jamaicans it is a widely used social lubricant; 65 per cent of the population, including 80 per cent under 21, smokes cannabis.

The number of devout Rastas in Jamaica is estimated at 150,000. But by injecting doctrine into reggae lyrics they have given almost all Jamaicans a mass cultural identity. In a country where three-fifths of the population are descendants of former slaves, Rastafarianism offers a spiritual nationalism and the opportunity to question the poverty and the depressed living conditions in modern Jamaica. The sect’s concept of a black Christian God is an ironic concept for people in the West.

Bob Marley was the crown prince of reggae. A devout Rasta and skillful singer and songwriter, he infused his art with a political religion that gave Jamaica a new cultural identity. When he died this week he left behind a legend unequalled in Jamaican history.