Three Melbourne diamond merchants were shot dead in a $50,000 jewel robbery in the heart of the city yesterday. 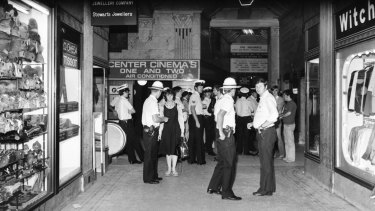 Police seal off the ground floor of the Manchester Unity building after three men were killed. Credit:The Age Archives

The three men were shot in the back of the head in execution-style killings in the Manchester Unity building, opposite the Town Hall.

They were Mr Paul Rice, about 30, jewellry manufacturer of North Croyden, Mr Robert Wartman, about 33, and Mr Keith Hyman, about 32, both jewel dealers.

They were forced to lie face down on the floor with their arms outstretched before being shot.

The chief of the homicide squad, Detective Chief Inspector Noel Jubb, described it as “one of the worst killings we’ve ever experienced – an execution.

“It appears they have gone there determined to do what they did,” he said.

The bodies were found in small adjoining rooms in the office of Paul pace, manufacturing jewellers, on the eighth floor of the Manchester Unity building at the corner of Swanston and Collins streets at 5 pm.

Police believe the three jewellers had gathered for a big uncut diamond transaction.

One was gagged and shot twice. His body was in the front room of the officer.

The other two, found in an adjoining room, were shot once.

Detective Chief Inspector Jubb said at least one of the men was shot with a .22 weapon. Tests were being done to see if the same weapon was used in all killings.

He said it was possible a silencer was used.

Mr Pace was last seen by other tenants in a passageway about midday. The other two men left their nearby city offices at 1.15 pm and 1.55 pm respectively for the meeting.

Detective Chief Inspector Jubb said it was possible the killers had previous dealings with one of the jewellers.

“What we want to know is how they got in to the officer – whether they were customers or walked in when someone else walked out.”

Police broke through the front opaque of the office after being called by other worried tenants.

Later, officers carried oxy-acetylene equipment into the building to cut into the office safe to try to establish exactly what had been stolen.

It is believed the killers or killer may have ordered the men to open the safe, then closed it before fleeing.

Fifty detectives were put on the case soon after the bodies were found.

Hundreds of other police were involved in airport and railway station checks last night.

Flights were delayed as officers opened bags, briefcases and parcels and searched some purses.

Interstate trains from Spencer Street station and others at Flinders Street were also searched.

The head of the CIB, Chief Superintendent Peter Standfield said: “We have many leads at the moment – they are all being checked out.

“There are a number of jewellers operating from the eighth floor. It is not unusual for no one to have heard shots because of the traffic.”

One was about 182 cm, wearing dark slacks and jumper with shoulder-length dark hair.

A man seen running along Collins Street into the Tivoli Arcade was about 175 cm, wearing a green lumber jacket. He had light ginger hair and a beard.

Another man was tall, of solid build, wearing blue jeans, sneakers and a cream top and jumper.

Tags: 1978:, Archives, from, Jewel, the
You may also like
Celebrities News