The Tramways Board could hardly claim a brilliant success with its first day of bus queues in Bourke-street yesterday.

At times the innovation approached fiasco, although in the main it showed it had definite promise once the public “gets the hang” of it.

The pictures above sum up the position yesterday. 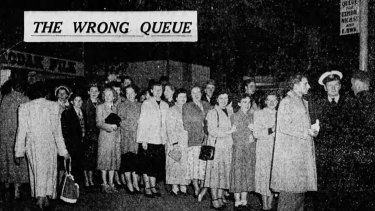 Confused by the novel idea of waiting in line for a bus, people formed a queue across the footpath blocking pedestrians.Credit:Age photographer

In the heart of the peak period last night—right outside an emporium between Elizabeth and Swanston streets—a queue of bewildered people formed up astride the footpath and blocked pedestrians.

This happened because a reporter stopped to ask a policeman and a parking attendant how the queue system was making out.

Like sheep, travellers waiting for buses formed in behind the reporter’s back within a few seconds.

They were told, when the officers saw them, that they should be standing along the kerb. 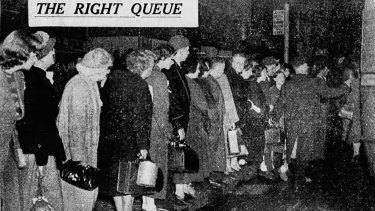 A team of Tramway inspectors, police and council parking attendants directed those waiting to line up along the curb.Credit:Age photographer

At the same stop, other travellers heeded directions and formed a correct queue.

The new system took some directing. Tramway inspectors spent much of the day shouting to drivers to bring their vehicles in at the exact points required.

When a bus with two entrances came along the queues generally came close to confusion.

A big team or Tramway inspectors, police and City Council parking attendants was needed to educate the travelling public to the new order of things.

To obviate pushing and shoving white lines were marked on pavements so that boarding passengers might enter the vehicles in an orderly way.

The system was at work in Bourke-street for east-bound buses at loading points near Elizabeth, Swanston and Russell streets. Another location was on Queens Bridge for buses to Fisherman’s Bend.

The public reaction was that the idea still needed a bit of organising, but it certainly saved older people from being buffeted about.

The Tramways Board chairman (Mr. R. J. H. Risson), who studied the queuing yesterday with several of his senior officers, is of the opinion that the system is here to stay.

“I am confident queueing will remain after our experience today,” said Mr. Risson. “It was so good that we expect to introduce another queue at the Elizabeth-street stop for passengers travelling to the west of the city,” added Mr. Risson.

Tags: 1951:, Archives, from, the, Today!
You may also like
Celebrities News