Rome: The 21-year-old Tunisian Nice attack suspect arrived in France via the Italian island of Lampedusa only a few weeks ago, sources close to the inquiry said.

The revelation that Brahim Aouissaoui, the suspect, landed in late September on the tiny island south of Sicily sparked a major political row in Italy. 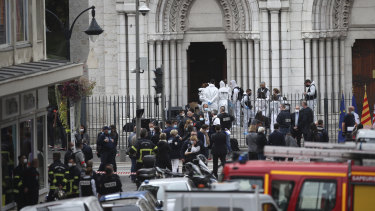 Police officers work at the Notre Dame church in Nice, southern France, after an attacker armed with a knife killed at least three people.Credit:AP

Italian authorities reportedly placed him in quarantine for two weeks on board a ship, the Rhapsody.

He was interviewed by immigration officials on October 8, Italian media reported last night. But they released him, giving him an expulsion order and telling him to leave Italy.

Instead, he travelled to the southern city of Bari, in the region of Puglia, and from there made his way to France in early October. It was reported that the French authorities identified him from a document he had been given by the Italian Red Cross.

Tunisia on Wednesday, local time, announced it had opened an investigation into the alleged attacker.

Matteo Salvini, the head of the League party, accused the government of being too lax on immigration controls and called for the resignation of Luciana Lamorgese, the interior minister.

"If it is confirmed that the attacker landed on Lampedusa in September, then went to Bari and then fled, then we will ask for the resignation of the interior minister," said Mr Salvini, who was interior minister and deputy prime minister until last summer, when his coalition government collapsed.

The government also came in for criticism from Giorgia Meloni, the head of the hard-Right Brothers of Italy party. "If the reports are confirmed, this will be exceptionally serious and will expose our country to the risk of (diplomatic) isolation," she said.

She called for clarification from the interior minister, as well as Giuseppe Conte, the prime minister, and Luigi di Maio, the foreign minister.

MPs from a centre-Right party called Cambiamo (Let's Change), said Italy and the rest of Europe deserved to know if other "lone wolves" ready to carry out terrorist attacks had passed through Lampedusa.

There has been a surge in the number of Tunisians trying to reach Italy by sea in recent months, as the virus worsens an already dismal economic situation in the country.

The MPs asked whether other "potential attackers" were arriving under the "false guise of being desperate migrants".

It is not the first time a terrorist has passed through Lampedusa from North Africa.

Anis Amri, the Tunisian who killed 12 people in a truck attack on a Christmas market in Berlin in 2016, had transited through the island in 2011. He asked for asylum, claiming to be a minor.

After the Berlin attack, he fled Germany and was shot dead by police in northern Italy.

Tens of thousands of asylum seekers have passed through Lampedusa over the years but only a tiny minority were "bad apples", said Pietro Bartolo, an Italian doctor who worked on the island for 25 years and is now an MEP for the centre-Left Democratic Party.

"We know that, unfortunately, from time to time, there are hot heads among those who arrive, but luckily these are extreme cases," he said. "Anis Amri also passed through Lampedusa but that doesn't mean that all migrants who arrive on the island are terrorists."