London: Prince William warned the Queen he would feel uncomfortable in the Order of the Garter ceremony alongside his disgraced uncle.

Prince Charles also made an eleventh hour intervention amid fears of a public “backlash”. The pair shared their concerns with each other before taking them to the Queen on Sunday.

As a result, the Queen reluctantly told her second son, Prince Andrew that he could not appear in public at the event “for his own good”. 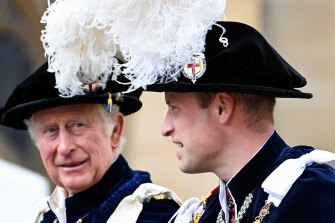 Prince Charles, Prince of Wales and Prince William, Duke of Cambridge depart in a carriage for their return journey to the Castle following the Order of the Garter Service at St. Georges’s Chapel, at Windsor Castle in Windsor, England. Credit:Getty

As the news emerged just hours before the Windsor Castle ceremony was due to begin, Prince Andrew was at pains to portray it as a “personal decision” he had made after realising the “timing was not right”.

“He does not want to do anything that would embarrass the Queen or make things difficult,” one source said.

But Buckingham Palace aides told a different story, describing it as a “family” decision.

So last-minute was the intervention that the order of service had already been printed, listing Prince Andrew’s position in the procession alongside the Earl of Wessex and directly ahead of Prince William.

The seating plan also showed that Andrew had been given top billing, positioned between the Princess Anne and Camilla, Duchess of Cornwall for the service at St George’s Chapel.

Instead, Andrew joined the Queen and rest of his family only for the investiture in the castle’s Garter throne room and the traditional lunch afterwards in the Waterloo Chamber, both behind closed doors.

The move prevented him from being photographed alongside other royals in the Order’s extravagant velvet robes and plumed hats. Camilla took part in the procession for the first time, having been appointed a Royal Lady of the Order of the Garter. 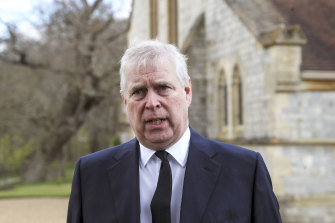 Prince Andrew has stepped back from royal duties since the scandal rose to attention.Credit:AP

Baroness Amos was also appointed to the oldest and most senior British Order of Chivalry, as was Sir Tony Blair.

The latter’s participation prompted a noisy protest outside the castle walls by around 100 Stop the War activists chanting “Tony Blair war criminal”.

This was the latest humiliation for Andrew. His fate was sealed after the Telegraph revealed that he had been lobbying the Queen for a return to royal duties and was even pushing to have the colonelcy of the Grenadier Guards returned to him.

Palace aides are confident this will not happen.

“There’s a big difference between what you ask for and what you get,” one well-placed source said.

Andrew had been looking forward to taking part in the pomp and pageantry of the Garter procession, the first for three years, and had considered it a small step on the way to his return to some form of royal life.

Instead he was photographed looking downcast at the wheel of his car, dressed in a suit.

The last-minute ban is indicative of the Royal family’s sensitivity to the strength of the public feeling about his “pariah” status, after he paid his sexual abuse accuser around £12 million to settle a high profile, and highly damaging, civil case in February. Andrew has always denied wrongdoing.

It was considered fortuitous among many members of the family that Andrew was struck down with Covid ahead of the Platinum Jubilee and forced to pull out of the service of thanksgiving at St Paul’s Cathedral.

Prince Andrew had planned to attend Ascot more than once this week, and was due to appear in the Royal box, but again has had to abandon his plans after being warned it would not look good.