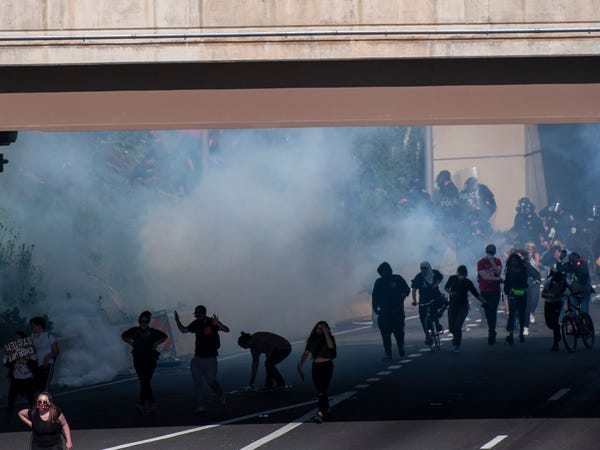 The Philadelphia City Council passed a ban on the police use of "less lethal" weapons such as tear gas, rubber bullets, and pepper spray in protests.

On Thursday, the city council said in an announcement that less-lethal weapons would no longer be available to police "in response to demonstrations and other activity protected by the first amendment," and cited that the ban passed amid protests following the death of Walter Wallace Jr, a Black man who was repeatedly shot and killed by two Philadelphia police officers who were responding to a call he was carrying a knife.

The city council said the bill was created following council hearings this month where around 38 residents and demonstrators testified about their traumatic experiences from these "less lethal" weapons.

"I was exposed to copious amounts of tear gas that resulted in uncontrollable vomiting. For days after, I experienced complications such as blurred vision, a swollen and sore abdomen," Chris Romano, a local business owner, told the council.

"I stood tall to him and put my right fist in the air and my head down and all of a sudden I got hit with a rubber bullet," he said. "I began walking towards the officer and got hit with his baton, and I didn't notice that the armored truck had pulled up next to me while my head was down. I was pepper-sprayed and everyone was running for our lives."

Philadelphia Police did not immediately respond to Insider's request for comment on the council's approval of a ban. The bill is to be reviewed by Philadelphia Mayor Jim Kenney, The Philadelphia Inquirer reported.

Philadelphia city spokesperson Mike Dunn told Insider in a statement that, "As with all legislation that is given final approval by City Council, the Law Department will review the measure. We support the intent of the bill, in that it attempts to codify existing Departmental policy that restricts the use of less than lethal munitions while individuals are peacefully protesting during first amendment activity. The bill authorizes the Department to adopt such a policy."

Less-lethal weapons have been widely used by police amid the wave of protests across the nation over the past several months. The less-lethal weapon industry is growing and is projected to be worth $11.3 billion by 2023, up from $6.3 billion in 2016.

Philadelphia is the largest city thus far to pass a ban on "less-lethal" weapons in protests, according to the city council. There have been numerous reports of injuries among protesters and journalists from these "less lethal" weapons like rubber bullets. In May, for example, freelance photojournalist Lynda Tirado was hit in the eye by a rubber bullet and was permanently blinded.

Some cities have proposed complete bans on police use of these weapons. In Seattle, the city council unanimously passed a bill banning police use of tear gas but a federal judge blocked it, citing the ban could actually lead to more use of force, The Seattle Times reported.

Others, like Philadelphia, have proposed bans of police use of these weapons specifically during protests. Amid the protests in Portland following the killing of George Floyd, Portland mayor Ted Wheeler banned the police from using tear gas during demonstrations.

Tags: Philadelphia, Police, protest
You may also like
Celebrities News