‘Manipulative’ florist, 22, ‘obsessed by men’ avoids jail after luring her ex into a trap so her new lover could beat him so badly with baseball bat that police found brain matter on the pavement

A florist, 22, ‘obsessed by men’ has walked free from court after luring her abusive ex-partner into a trap so her new lover could beat him so badly with baseball bat his ‘brain matter’ was splattered on a pavement.

Crystal Culhane, 22, was given a suspended sentence after luring her former partner, Paul Flory into a trap where he was attacked by her new man, James White, in August 2019.

Mr Flory, 33, miraculously escaped death when his head was split open in the frenzied attack which saw White corner him in an alleyway and ‘beat his brains out’.

James White, 22, had been persuaded to carry out the beating by ‘manipulative liar’ Crystal Culhane, also 22, who was obsessed by men.

But while White got 11 years, Culhane was given a suspended sentence after she claimed a car accident left her with post traumatic stress disorder. 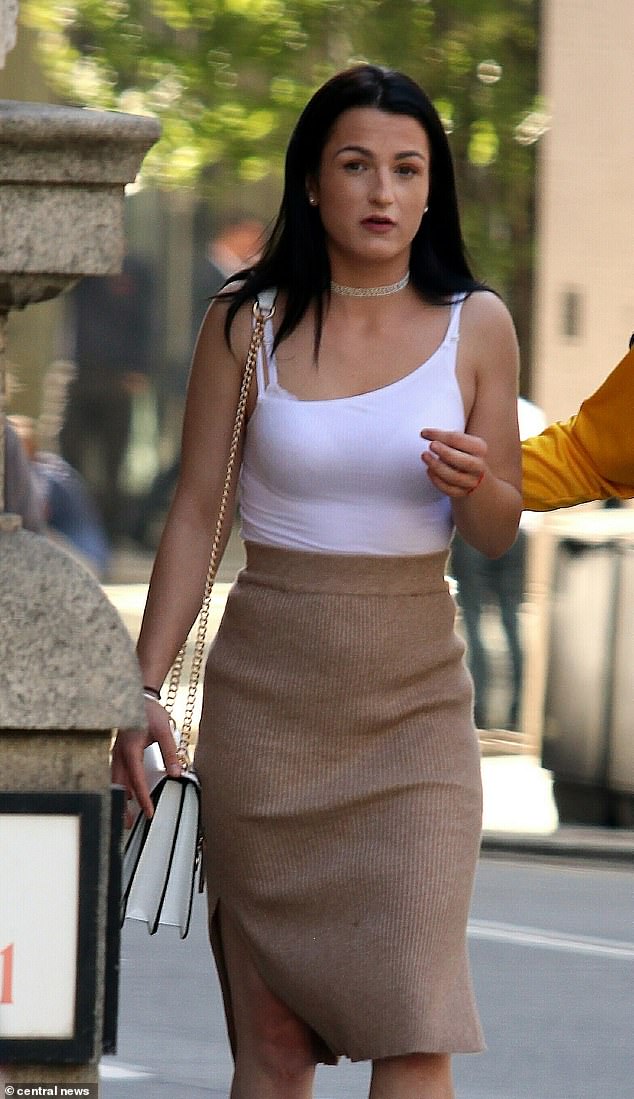 Crystal Culhane, 22, (pictured outside the Old Bailey) was given a suspended sentence for luring her abusive ex-partner, Paul Flory, into a trap so her new lover could beat him

The Old Bailey heard White and Culhane rekindled their teenage romance over an Indian meal on 18 August 2019, and White brought Culhane back to his flat in Dovedale Close, Harefield, west London for a night of passion.

But Culhane was also dating 33-year-old Paul Flory, despite his history of violence against her.

Impressed by White’s flat and flash lifestyle, Culhane used him to get Mr Flory out of her life that same night.

In a series of text messages she told Mr Flory where she was and waited for him to turn up on White’s doorstep at approximately 1:30am.

White armed himself with a baseball bat and headed outside to batter Mr Flory – who was left with horrific injuries to his head and body and found in a critical condition by members of the public.

One of the police officers called to the scene, PC Dean Williams, said he spotted what he ‘suspected to be brain matter’ along with ‘claret’ [blood] splattered on the pavement.

Prosecutor Tyrone Silcott said: ‘Brain matter was seen coming out of his head by witnesses. 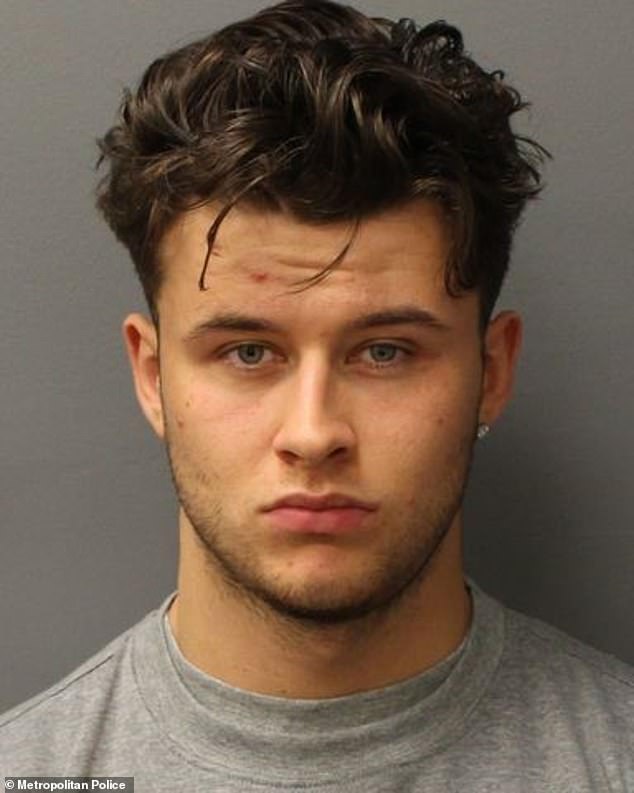 James White, 22, (pictured) had been persuaded to carry out the beating by ‘manipulative liar’ Crystal Culhane who lured Mr Flory to the location. White armed himself with a baseball bat and cornered Mr Flory in an alleyway and ‘beat his brains out’

‘Mr White had literally beaten his brains out.’

Mr Flory was rushed to hospital where paramedics managed to save his life.

Police recovered the bat containing DNA belonging to White while Culhane was caught by her text messages luring the victim to her lover’s home.

Judge Sarah Munro, said Culhane was a ‘determined, persuasive and manipulative liar’ capable of conning professionals into sympathising with her.

‘Crystal Culhane did not, as the jury found, intend you (White) to attack him as brutally as you did but she did intend I am sure that you cause him considerable harm.

‘She did not anticipate that you would use a weapon.

‘You took the baseball bat with you either from the flat or from one of your vehicles, and as you now accept, you cornered Paul Flory in an alleyway and you battered him all over his head and body, literally beating his brains out.

‘The attack lasted no more than 50 seconds and you left him for dead as you ran back to your flat with the bat, wiping the bat on the grass as you fled.

‘Through the evidence, the reports and my own observation of you throughout the trial, it is clear that you, Crystal Culhane are a complex young woman of 22.

‘On the one hand you are an attractive, beautifully groomed and dressed young woman who is concerned at all times for your appearance.

‘You are, as I have seen from your text messages, articulate and literate. You are nowhere near as stupid as you would, when it suits you, have people believe. 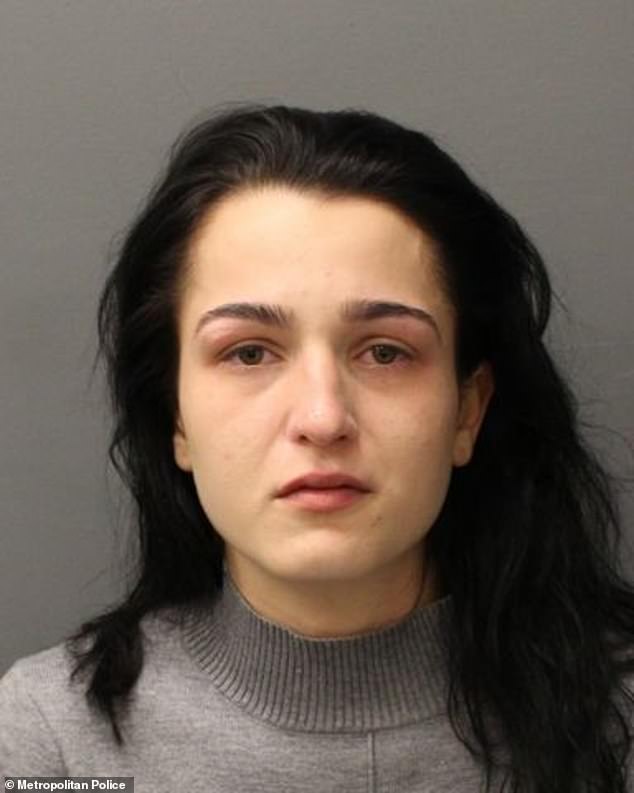 Following a trial at the Old Bailey, Culhane, who worked as a florist and carer,  was given a suspended sentence after she claimed a car accident left her with post traumatic stress disorder

‘Indeed, the evidence showed you to be a determined, persuasive and manipulative liar who is capable of deceiving others including professionals.

‘On the other hand you undoubtedly had a very difficult childhood, you were in care, you had special educational needs and you were unable to achieve academically.

‘You are prone to severe anxiety. You have been diagnosed with PTSD after a very unpleasant car crash. However you were able to gain employment as a carer.

‘You have also had considerable physical health issues. The probation officer assesses that you crave the attention of men.

‘You are somewhat inured to violence at their hands and you lack self-esteem or self respect. You may well use lies as a defence mechanism.’

Tim Starkey, defending Culhane said: ‘The domestic violence which she witnessed in her childhood, sadly seems to have been repeated in her own relationships.

‘She has been in four serious or long term relationships and in three of these she has experienced serious domestic violence and it maybe that she has come to accept that because of what she saw as a child, teenager and young adult in her own relationships.

‘A willingness to please and wanting to be loved is why she attracted men who recognised it and exploited it. You may think of that night she was caught between two violent men.

‘Something she spoke to me with pride about was her work as a carer. She had been doing that for two years before she was arrested.

‘She said to me she loved it. She talked about caring for people and loving that.

‘Something else which speaks to her determination to really turn her life around is the work she has done at ‘Funky Flowers’ the florists. It has given her a sense of purpose and a sense of self esteem.’

But prosecutor Tyrone Silcott, said: ‘Culhane lies whenever it suits her.

‘Mr White and Ms Culhane lured Paul Flory to a location near Mr White’s address at approximately 1:30am on 18 August 2019.

‘Once Mr Flory attended, he was on his mobile phone in contact with or trying to contact Ms Culhane.

‘Mr White then left his address where he had spent the evening with Ms Culhane and attacked Mr Flory with a baseball bat.

‘The attack was vicious and frenzied leaving Mr Flory with horrific life-threatening injuries.

White was convicted of possession of the offensive weapon and grievous bodily harm with intent and was handed a jail sentence of 11 years (Pictured, the Old Bailey)

‘The paramedics who treated Mr Flory at the scene found him unconscious with very severe head injuries and major fractures to the skull, front and back and major swelling to the eyes and face with massive bleeding.

‘He also had massive bruising to his abdomen and chest. It is a miracle he survived the attack.

‘There is no dispute that Mr Flory was subject to an attack at that time and in a location very near to Mr White’s address.

‘Due to the severity of the attack and injuries sustained Mr Flory is unable to assist with who attacked him.’

Culhane was handed a jail sentence of two years suspended for two years and White was jailed for 11 years.

Culhane must complete 200 hours of unpaid work and 60 sessions of rehabilitation within 18 months.

Tags: 22, after, avoids, Florist, jail
You may also like
Celebrities News