Doctors say Victoria’s intensive care units would be forced to ration specialist staff and have them treat many more patients to cope if hundreds of seriously ill people hit hospitals by mid-December as predicted.

The forecast came as Premier Daniel Andrews walked back a pledge to establish 4000 extra ICU beds in the state, saying a scenario where thousands of beds were required at the Melbourne Convention and Exhibition Centre was “not what success looks like”. 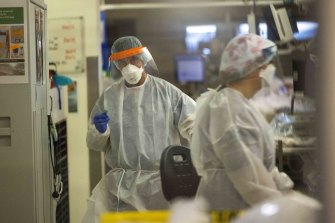 Victorian healthcare workers are preparing for a sharp increase in the number of hospitalised coronavirus patients. Credit:Wayne Taylor

Burnet Institute modelling underpinning Victoria’s road map out of lockdown estimates that by the middle of December there could be between 462 and 953 coronavirus patients needing intensive care, probably exceeding the system’s current capacity.

Intensive care leaders said while it would be possible to care for roughly 700 patients at once, it would be incredibly hard and require changes to the way intensive care units normally operate. Some of that work had already begun, they said, with about 400 nurses given training or refreshers in the field in the past year.

Australian and New Zealand Intensive Care Society president Anthony Holley said on Monday that Victoria had 403 intensive care beds staffed and available, and 57 COVID patients in these units. He said it would be possible to ramp that up to the levels predicted in the Burnet modelling, but it would come at significant cost to staff and involve the need to expand into other areas of hospitals.

“I’m not saying it is easy and I’m not saying that this isn’t a crisis. What I am saying is I think a lot of thought has gone into it and … we will continue to deliver critical care at a very high standard,” Dr Holley said. “I don’t anticipate us ending up in a situation [that we’ve seen overseas] where people are dying in the waiting room.”

The availability of critical care nurses remains the key challenge, and Dr Holley said one way to relieve their workload could be teams of allied health staff and nurses from other areas that come in to help turn or bathe patients.

Intensive care doctors, who typically oversee about 10 patients, would also be able to take on a higher number of people.

“The worry is longer term, the toll it will take on people,” he said. “The longer it goes on, the harder it becomes to keep up the momentum.”

There are now 209 people with coronavirus in Victorian hospitals. Of those, 86 per cent were not vaccinated, 12 per cent were partially vaccinated and just three people were fully vaccinated. The announcement of 567 new cases on Monday, the largest number this year, was followed by news that a woman in her 70s from Moreland had died from the disease.

In a boost to the state’s supply of vaccines, the Pharmacy Guild of Australia’s Victorian president, Anthony Tassone, said 440 pharmacies in Victoria would receive the Moderna vaccine this week, and an additional 281 pharmacies would get their hands on it in about a week. 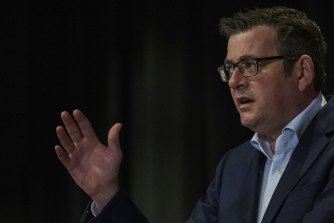 But there are some signs the outbreak may be losing pace, prompting hope that Victoria can still defy the Burnet Institute’s predictions of thousands of daily cases by December and peak lower than NSW’s outbreak, which may have reached a ceiling around the 1500 mark. Only 935 new cases were reported in NSW on Monday, though Premier Gladys Berejiklian said it was still expected October would be the worst month for the state’s hospitals.

Deakin University epidemiology chair Catherine Bennett said the reproduction number of Victoria’s outbreak had dropped close to 1.2. If the rate dropped to 1.1, Victoria would start easing restrictions at a much lower number than forecast, which might mean the assumptions made in the modelling are too pessimistic, resulting in fewer Victorians in intensive care.

In April last year, the Victorian government announced $1.3 billion would be spent to quickly establish an extra 4000 ICU beds and “secure the ICU equipment, staff and space we need”.

“None of us want to see the scenes from Milan, New York and other parts of the world happening here in Victoria,” the government statement said.

But on Monday, the Premier said it was never going to be possible to have “4000 beds down at a warehouse somewhere” with nurses ready to go.

“Whilst we’ve made many investments to increase the number of staff, it’s not like a switch where you can suddenly turn a nurse into a critical care-qualified nurse,” Mr Andrews said. “We’re a year on and no one in our health system has had an easy time of it between when that press release was issued and me standing here today.”

One of Australia’s leading health economists, Stephen Duckett, said while the current best practice is one ICU nurse per patient, this could be shifted to one ICU nurse staffing two beds alongside another nurse, who did not have intensive care experience.

“This is what you have to do with surge capacity. There is always a trade-off,” Professor Duckett said.

“You say, ‘Look we are prepared to tolerate this for a limited period of time. This is not what we think perfect practice is, but it’s acceptable practice for now.’

Asked whether state and federal governments could have done more to prepare for the predicted surge of COVID-19 patients in intensive care, Professor Duckett said with the benefit of hindsight it was difficult to answer as “six months ago, 12 months ago, things were looking pretty good”.

However, training more nurses to work in intensive care was always going to be difficult because hospitals across the state are so stretched already, he said.

“All the staff are under such huge stress, working extremely long shifts, while other staff are being furloughed,” he said. “So taking staff out of the system 12 months ago to get them to do more intensive care unit training probably wasn’t the highest priority.”

Stephen Warrillow, the director of intensive care at Melbourne’s Austin Hospital, said caring for about 700 patients in Victoria’s intensive care unit at any one time would require all the usual staff to work, along with new recruits from departments with similar skills, including anaesthesia.

He confirmed the model of care would also change, so that instead of having one specialist ICU nurse for one ventilated patient, the new staff would be closely supervised by the ICU nurse, allowing the intensive care staff to be spread across more patients.

However, he noted that would only occur once the entire Victorian ICU system had reached a saturation point.

“No matter where the critically ill person is, they get the highest standard of care that the system can deliver,” Associate Professor Warrillow said.

COVID-19 response commander Jeroen Weimar said over half of the cases newly announced on Monday were in households where there had already been positive cases. He said 82 per cent were people under the age of 50 and that 87 per cent were in Melbourne’s northern and western suburbs.

Mr Weimar said there were 45 new cases in Melbourne’s south-eastern suburbs, such as Dandenong and Rowville, and 14 cases in regional Victoria, including five in Ballarat.

Tags: case, feared, in, surge, Victorian
You may also like
Celebrities News