Twelve far-right fanatics are charged with plotting terror attacks on mosques, politicians and asylum seekers in an attempt to spark ‘civil war’ in Germany

Twelve far-right fanatics have been charged with plotting terror attacks on mosques, politicians and asylum seekers in an attempt to spark ‘civil war’ in Germany.

In it’s planned attacks on mosques, the well-funded group intended to kill or injure as many Muslims as possible, authorities said on Friday.

‘They aimed through attacks on mosques and the killing and wounding of as many Muslims as possible to create civil war-like conditions,’ prosecutors said in a statement.

Prosecutors said the suspects, 11 gang members and one accomplice, had met regularly to plan, with all but one of them pledging to contribute thousands towards a 50,000-euro (£45,000) pot to finance the purchase of weapons.

The official said cash sums in the ‘mid four-digit range’ had been found in suspects’ houses.

The suspects, aged between 31 and 61, are all Germans and all but one of them has been detained. The twelfth is still at large, prosecutors in the southeastern city of Stuttgart said. 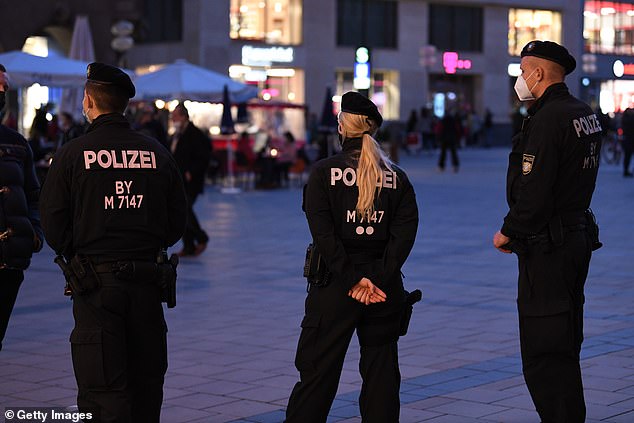 Twelve far-right fanatics have been charged with plotting to attack mosques, politicians and asylum seekers in an attempt to spark ‘civil war-like conditions in Germany, authorities announced on Friday. Pictured: Police in Munich, Germany (file photo)

Another suspect had died while in custody. A prosecution official said he had killed himself and that there was nothing to indicate foul play.

Eleven of the men, arrested in country-wide raids in February, stand accused of membership of a terrorist organisation and weapons law violations. The 12th has been charged with supporting a terrorist group.

The arrests followed raids, some by heavily-armed special units, which hit 13 locations in six German states.

The four prime suspects planned to spark ‘a civil-war-like situation… via as yet undefined attacks on politicians, asylum seekers and people of Muslim faith,’ federal prosecutors said in February.

The suspects are believed to have founded a ‘right-wing terrorist organisation’ with the goal of ‘destabilising and ultimately overthrowing’ Germany’s democratic order.

A further eight suspects were alleged to have agreed to ‘financially support the group, provide it with weapons or take part in future attacks’.

In order to plan their attacks, the group allegedly held regular meetings which were coordinated and organised by two of the main suspects, named only as Werner S. and Tony E.

No last names have been given for the suspects in line with German privacy laws.

German authorities have increased attention paid to the country’s underground extreme right scene since the murder of conservative local politician Walter Luebcke in June 2019 and an attack on a synagogue in the eastern city of Halle in October last year. 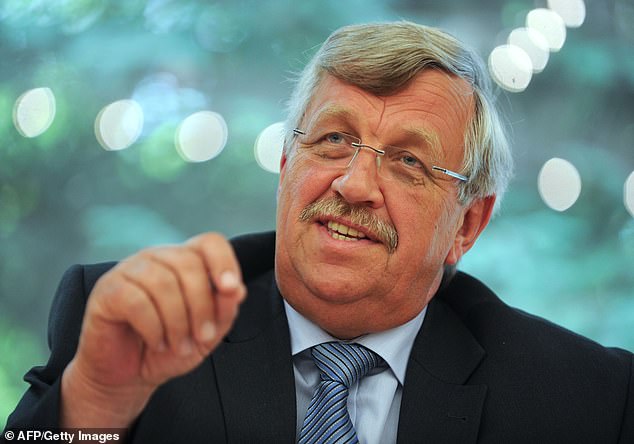 Walter Luebcke, a vocal supporter of Chancellor Angela Merkel, was a conservative politician who was killed in his back garden by an alleged far-right extremist for his views on immigration

Members of the so-called National Socialist Underground were convicted in 2018 for a decade-long spree of murders of ethnic Turks.

Luebcke, a vocal supporter of Chancellor Angela Merkel, had called for refugees to be given the support and welcome they needed during the 2015 refugee crisis. A suspected far-right sympathiser is currently on trial for his murder.

Media reports said police discovered several weapons in the February raids, including one self-made ‘slam gun’ similar to the one used in the Halle attack.

Far-right sympathisers have also been unmasked in the police and armed forces.

Far-right extremism is particularly sensitive in Germany because of its historical responsibility for the Nazis’ World War Two genocide of six million European Jews.