REVEALED: Extinction Rebellion activists are holding secret nighttime meetings in a Cambridge car park to prepare for protests that will grind Britain to a halt

Extinction Rebellion activists are believed to be holding secret nighttime meetings in a public car park just outside Cambridge where they are also storing their bright pink boat used as the centrepiece of their hated protests, MailOnline can reveal today.

Members of the climate group are said to gather with car headlights on and speak with ‘hushed tones’ as they plan their demonstrations and have been seen putting together their scaffolding-type structures used to cause traffic chaos in London and outside businesses they don’t like.

The car park is just down the road from one of XR’s most active local protestors, Nick Skelton, who also goes by DJ Skunk on a radio show that he runs. He told MailOnline he knew nothing about the quarterly meet-ups 50 yards from his terraced house.

A neighbour claims up to six activists gather when darkness falls to practice erecting the tipi-like wooden structures that are used to block roads during protests.

The man, who asked not to be named, told MailOnline: ‘They gather in the dark with the car headlights on like some kind of secret meeting. They’re tucked up in the corner and trying to not draw too much attention to themselves. It’s a fairly quiet place, you wouldn’t notice them as you were driving by.’

It is believed that the group may have used the car park to prepare for a recent Black Friday protest at Amazon distribution centres.

The XR activists also hide their famous pink boat at the far end of the car park, which is around the size of a five-a-side football pitch. Covered by grey tarpaulin, the boat – around two metres high and five metres long – was used to block a road in a recent protest at the Schlumberger Gould research centre in Cambridge.

Locals said it has been there for more than a year and XR members have been seen gathering there at least three times in 2021, but activist Mr Skelton said it is nothing to do with him.  A neighbour said that the boat had been in the car park since March 2020.

Nick said: ‘I can’t be implicated in anything. Anything that’s written down is incriminating or could be incriminating, and as you know it [the boat] is used for protests.

‘The boat just arrived there one day. I know it’s there but it’s not mine. It just lives down there. Someone comes and takes it away and it reappears again. I don’t move it and I don’t have access to the trailer or anything.’ 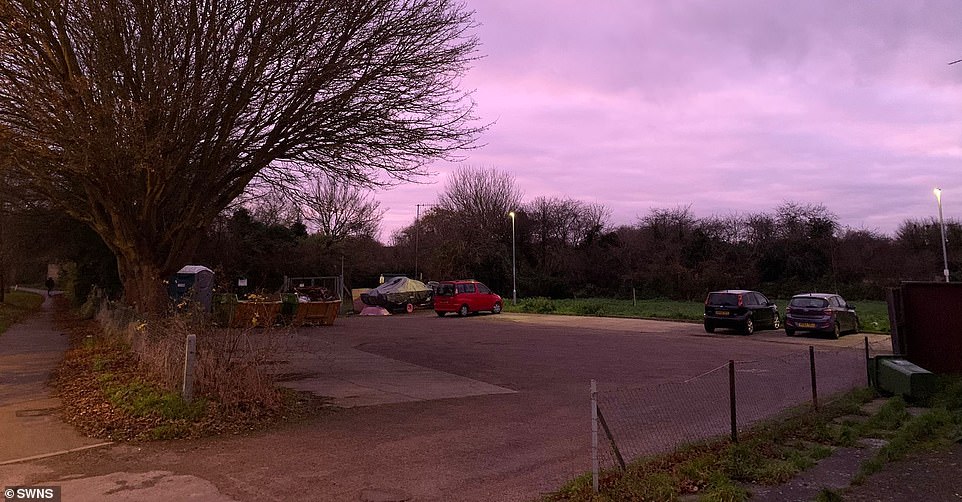 The unassuming public car park, on the outskirts of Cambridge, where Extinction Rebellion activists meet to plan disruptive demonstrations 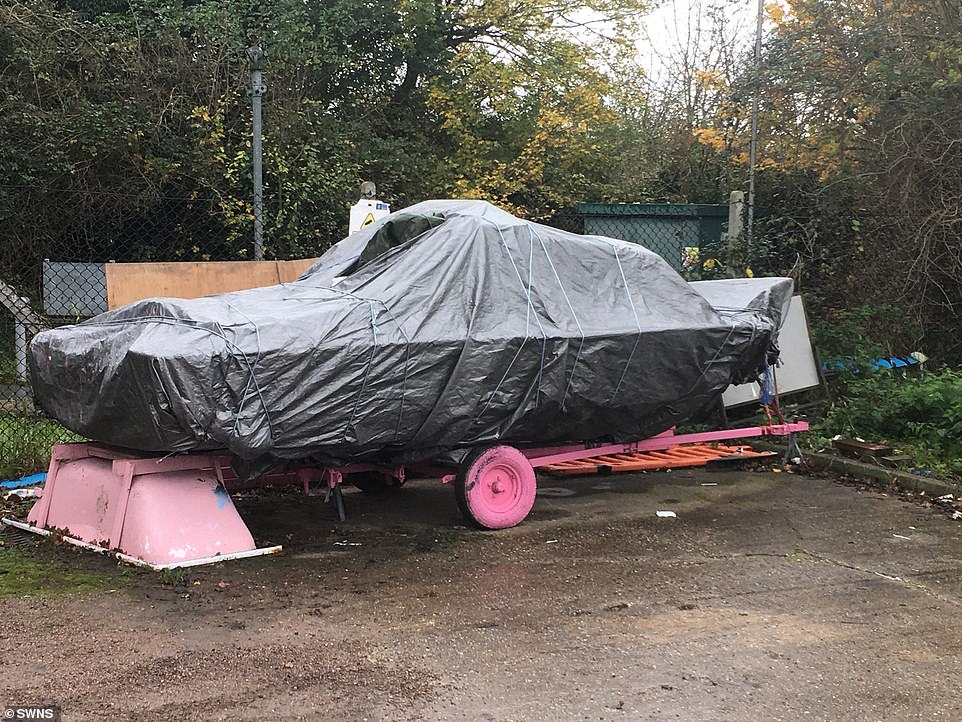 XR’s famous pink boat, which has been used in many of its demonstrations, is covered in grey tarpaulin in a corner of the car park 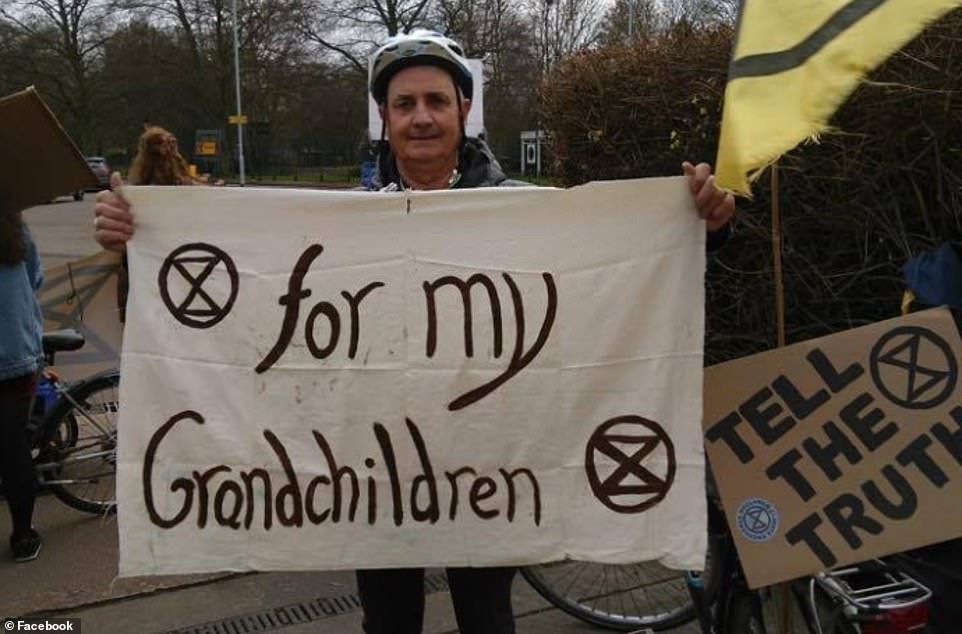 Extinction Rebellion protestor Nick Skelton, who also goes by DJ Skunk on a radio show that he runs, lives a short distance from the car park, but he denies involvement in any meetings at the location 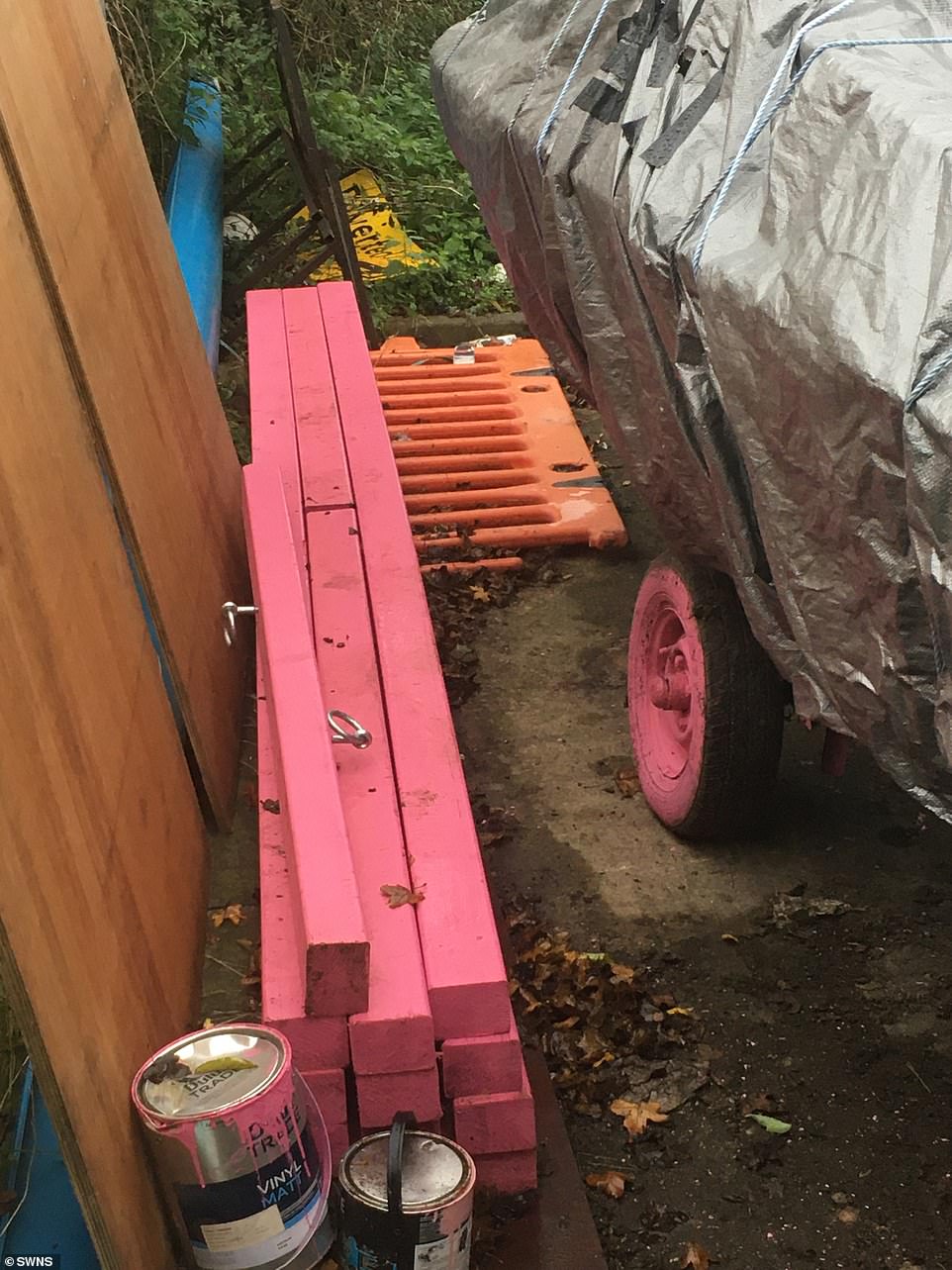 Two pots of paint and several planks of four-metre-long wood are stored beneath the boat, which sits alongside two large yellow skips and a portaloo 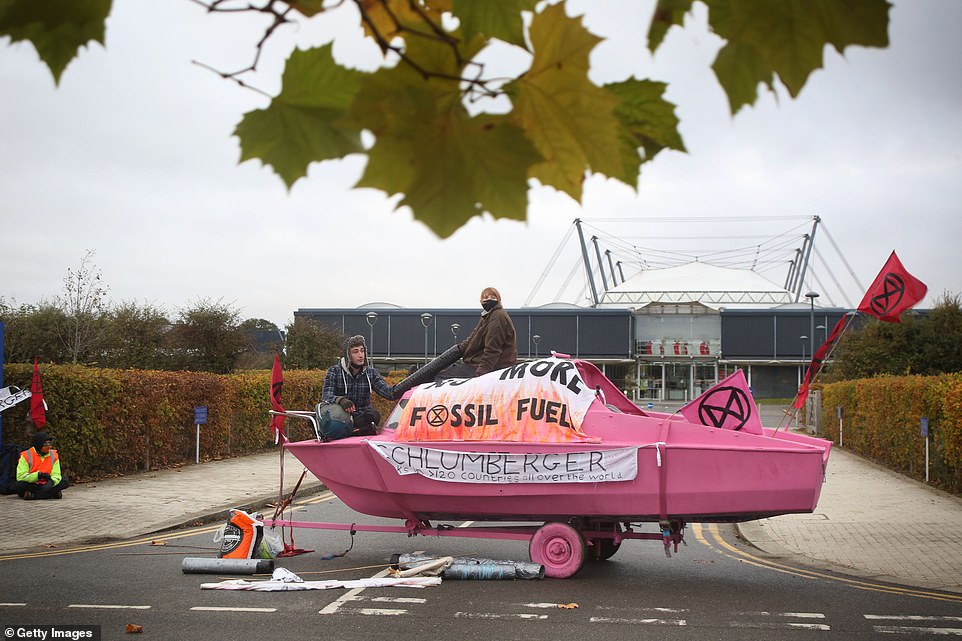 Activists from Extinction Rebellion, aboard the pink boat, block the main roads leading to Schlumberger, an engineering company, on November 4, 2021 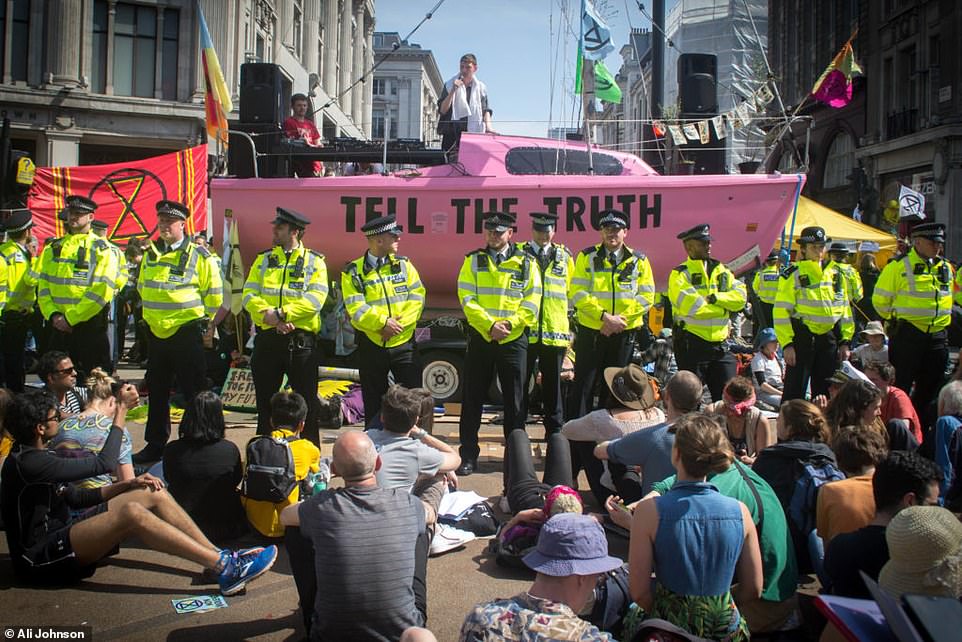 Nick, 68, denied taking part in the secret meetings of XR activists as he spoke on the doorstep of his semi-detached house, which has a large fabric banner in the front garden reading ‘A better world is possible’.

Nick, who was last year charged with conspiracy to cause criminal damage in relation to an XR protest before the charge was dropped, said: ‘I’m not involved in that. I’m disabled so all I can do is hold a flag or write a letter to an MP.’

He confirmed that the pink boat belongs to XR and was used in the Schlumberger protest but denied any personal ownership over it.

The boat sits alongside two large yellow skips, a portaloo and a red Toyota Yaris that apparently belongs to Nick.

Two pots of paint and several planks of four-metre-long wood are stored beneath the boat.

A neighbour said that he had seen XR protestors gathering in the car park on three occasions in the last year, including ahead of the recent Black Friday protests at Amazon distribution centres.

He said: ‘They meet to set up their tipis. They do practice runs at night before going out. It’s always in the evening with three to six people.’ 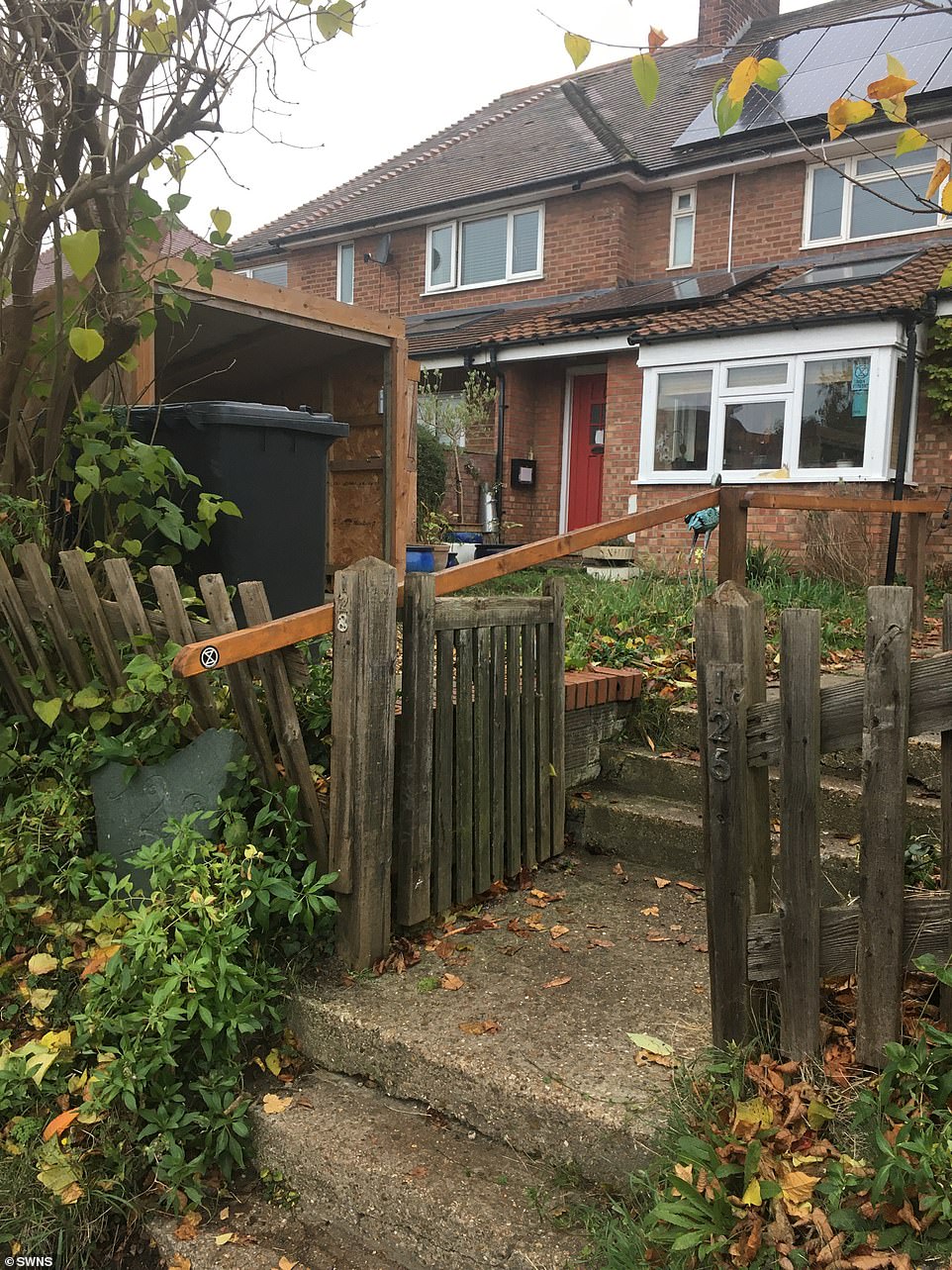 Mr Skelton, 68, he spoke on the doorstep of his semi-detached house, which has a large fabric banner in the front garden reading ‘A better world is possible’ 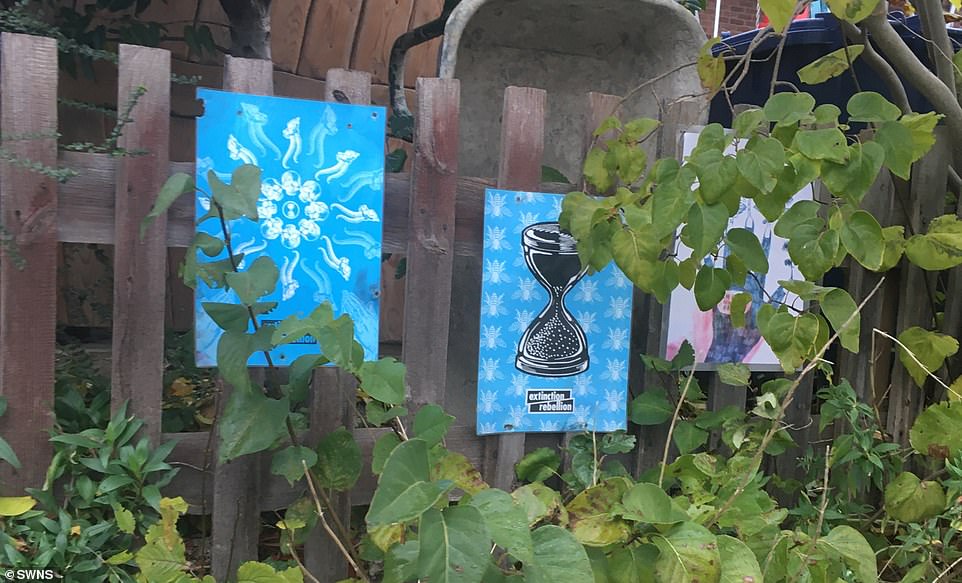 Drawings and symbols attached to a fence outside Mr Skelton’s house, a short distance from the remote car park

Extinction Rebellion has previously described itself as an international ‘non-violent civil disobedience’ movement and has staged countless demonstrations that have caused major disruption across the UK.

Since April 2019, the campaign group has targeted popular and busy areas of Britain, including central London, as well as disrupting commuters on the roads and gluing themselves to trains.

In October 2019, XR launched a two-week series of actions they called ‘International Rebellion’ which took place in 60 cities worldwide.

They also used a fire engine to spray fake blood onto and around the Treasury.

Most recently, 44 activists were arrested at the recent demonstrations outside Amazon distribution centres.

Activists arrived in the early hours of Friday to set up bamboo structures and ‘lock-ons’, and held banners urging Amazon to cut its emissions. 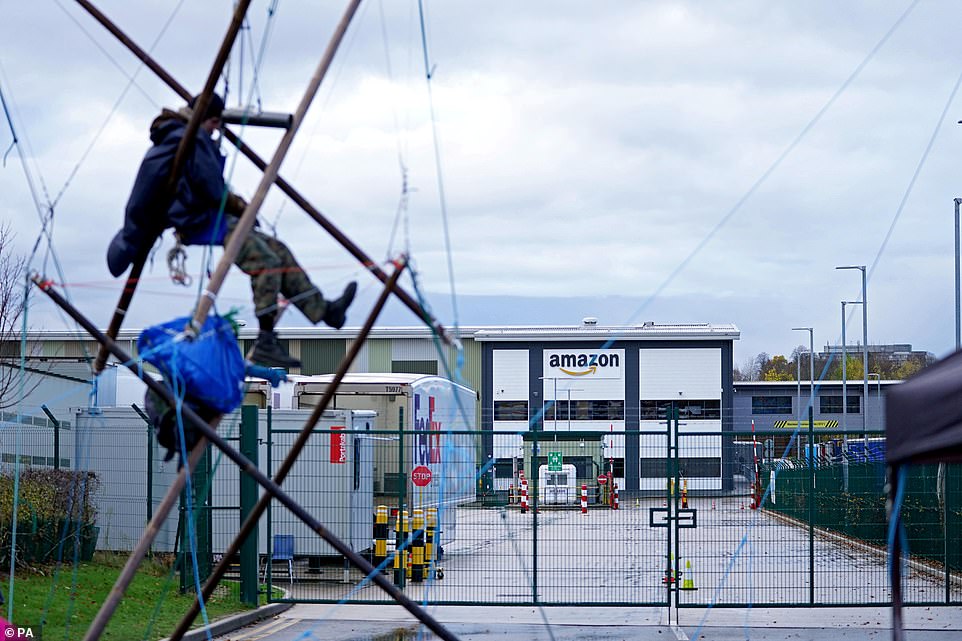 Activists from Extinction Rebellion block the entrance to the Amazon fulfilment centre in Coventry, preventing lorries from entering or leaving on Black Friday 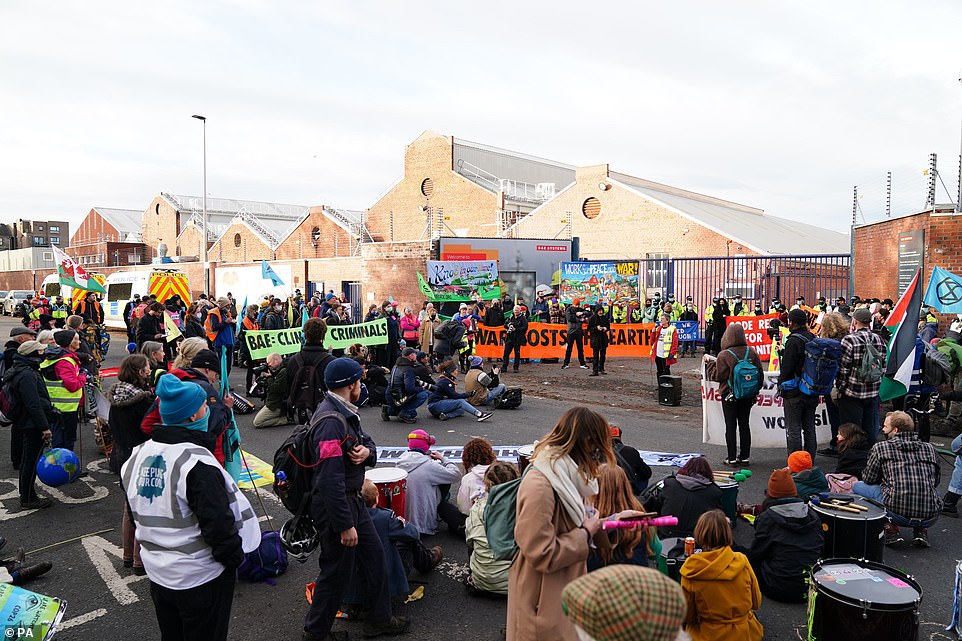 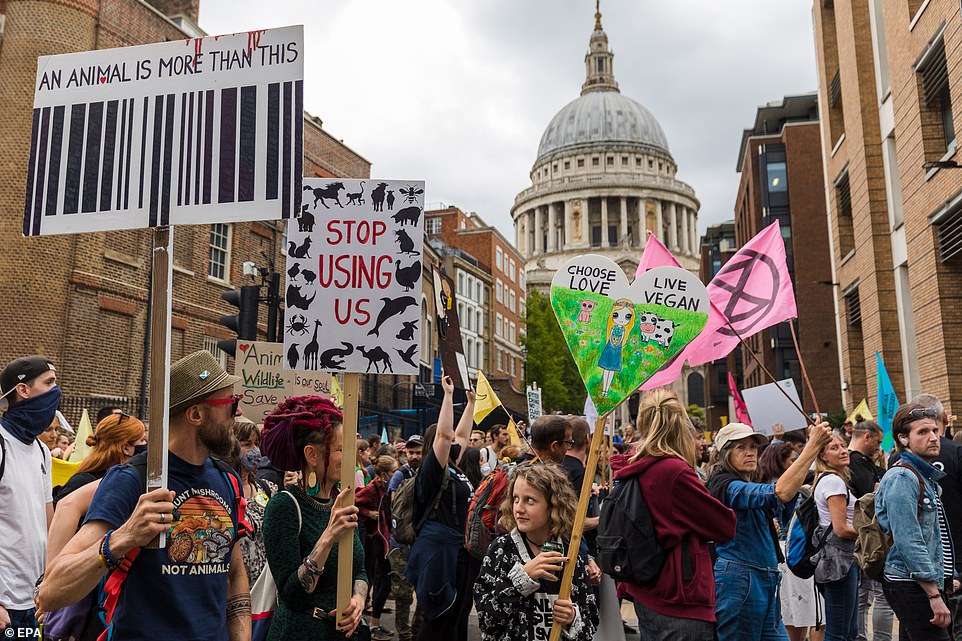 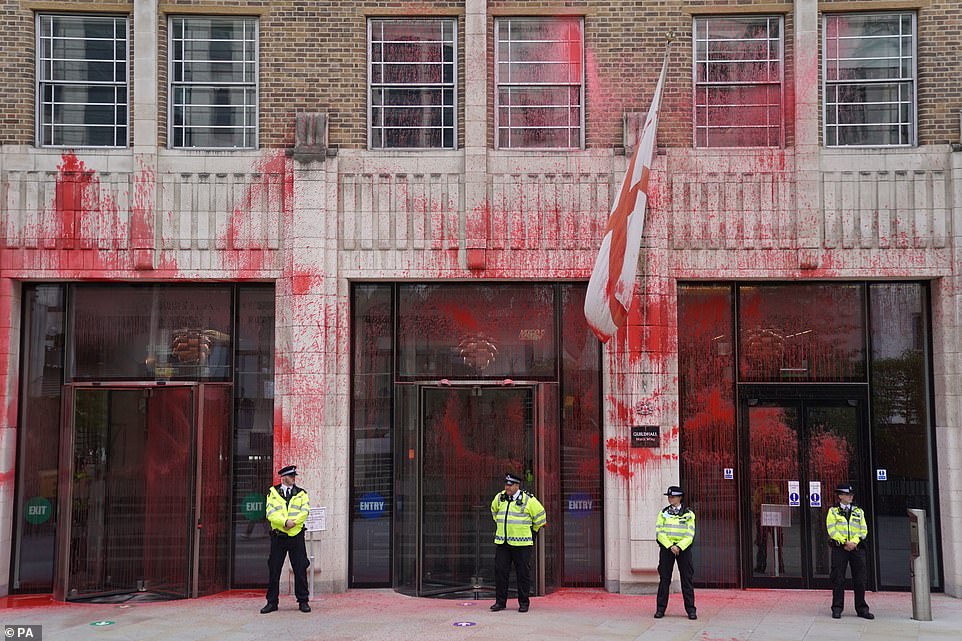 Police officers stand in front of one of the buildings of the Guildhall, which has been daubed in paint during an Extinction Rebellion protest in August

Last month, Extinction Rebellion pledged to mobilise two million protestors to launch what it says will be ‘the largest act of civil resistance in UK history’ in April next year.

It made the pledge after criticising November’s COP26 climate summit, claiming it did not go far enough to tackle the crisis.

The group said that the number of activists taking part in their demonstrations had dwindled during the pandemic but that they hoped to rely on record numbers in 2022.

The famous pink boat has featured in many Extinction Rebellion protests and was used to help blockade a busy Oxford Street junction in London back in April 2019.

A number of Extinction Rebellion supporters, including British Olympians Laura Baldwin and Etienne Stott, also chained themselves to the boat after gaining access to ExxonMobil’s Fawley oil terminal at the edge of the New Forest in Hampshire in October.